The Battle of Cyranduas was a major battle of the Second Great War, fought between Dekemurios 22, 16 NE and Ianuaria 2, 17 NE, on the Core World Cyranduas, between Imperial and Republic forces. The battle, one of the war's bloodiest, was notable for postponing Grand Mandator Deoclet Caesarius' invasion of the Republic-held Capricorn Sector, and was considered to be a potential turning point in the war after the recent fall of both Rambo Nation and the Terran Republic.

During the initial stage of the battle, Republic Admiral Quarantar trapped an Imperial taskforce under the command of Admiral Irenwen, recently victorious at Hosniaal and Cybele, utterly deciminating a significant portion of her fleet. Returning to find a far smaller Republic fleet in orbit, Irenwen, and Grand General Kasandra, orchestrated a vast invasion to destroy Cyranduas' planetary shield. However, Republic forces, entrenched on the planet, and under the guidance of the Aldárae Master Tyandas, managed to hold off the Imperials for over a month, whittling down Irenwen's forces, and inflicting disproportiante casualties. Though Tyandas and her forces were utterly killed by the Empire, they had destroyed much of the Imperial army, forcing the Empire to retreat from Cyranduas and allowing a renewed Republic armada to retake the system.

The Battle of Cyranduas was, along with the battles of Cadian and Coruanthor, counted among the most significant Republic victories up to that point in the conflict, for while it technically resulted in a stalemate, it reinvigorated the Republic and inspired the development of new tactics against the Empire.

The fall of Rambo Nation to Grand Admiral Decimius occured almost simultaneously to the fall of Terrae in the Milky Way, ridding the New Republic of some of its most powerful allies. With allied forces stretched thin across the Gigaquadrant, President Apollo knew that the Republic required a resounding victory to keep morale up, which had dropped to its lowest point since the destruction of the Mou'Cyran system at the beginning of the conflict. While the President worked with diplomats to chair a war council of allied leaders, Admiral Quarantar of the C.R.S. Starfyre planned to halt Grand Mandator Deoclet Caesarius' seemingly unstoppable push into the Capricorn Sector.

Studying the movements of Caesarius' chief officer, Admiral Irenwen, Quarantar made the controversial choice to leave a token taskforce to defend Cybele, which surrendered soon after the Absolution arrived in the system. Rallying his fleet in orbit over the strategically important world of Cyranduas, Quarantar awaited Irenwen's arrival. Meticulously moving his ships into formation, when Irenwen's armada finally arrived three days after the Fall of Cybele, Quarantar pounced. With dozens of Aether-class corvettes, and an entire flotilla of Venator-class Star Destroyers, the Republic forces, heavily outnumbering Irenwen's, pounded the Imperials into almost total submission—with Irenwen's flagship Absolution the sole Imperial vessel to escape the battle.

News of Quarantar's victory soon spread across Republic space, reinvigorating morale both among the citizenry, and the beleaguered officers of the Republic Navy. However, as Quarantar anticipated, the bulk of his armada was soon forced to dissipate to protect the other worlds in the Capricorn Sector, thus leaving him with a significantly reduced force to defend against the inevitable counterattack. Garrisoning his ground forces on the outskirts of Cyranduas City, Quarantar was soon joined by former Fleet Admiral, and current master of the Aldárae Order, Tyandas, who offered her help in reinforcing the planet against the Empire. Almost as soon as Republic forces completed the installation of a massive planetary shield generator, the Imperial armada arrived in the system.

Now in command of a vast armada, including the Star Destroyers Intimidator, Devastator and Basilisk, Irenwen made short work of Quarantar's depleted armada. However, the wily Republic armada brought the Starfyre below the clouds of Cyranduas to reinforce the shield generator. Though in command of a vast fleet, capable of melting the surface of a typical world, the sheer power of Cyranduas' shield was sufficient to deflect any bombardment. Thus, Irenwen coordinated with Grand General Eirae Kasandra to launch a massive assault against the Republic forces garrisoned at the shield generator. Though outnumbered five to one, the Republic forces fought tooth and nail to repel the Imperials, to the point that, after almost a month of constant fighting, the Imperials had barely marched a kilometre from their initial landing post.

Nevertheless, Grand General Kasandra continued to send wave after wave of Imperial war droids and soldiers at the Republic lines, constantly attempting new stratagems to oust the brave Republic defenders. Indeed, while ten Imperials fell to every one Republic soldier killed, both Master Tyandas and Quarantar knew that they could not hold off the Imperials forever. By the fortieth day of the battle, and on Tyandas' urging after Quarantar was almost killed by a blaster bolt, the Starfyre was forced to leave the planet, leaving only a dozen defenders to protect the shield generator. During a temporary lull in the combat, Grand General Kasandra offered Tyandas and her forces the opportunity to surrender, which, after brief consultation with her men, the Aldárae Master politely refused. Thus, in what became known across the galaxy as the Last Stand of the Heroes of Cyranduas, Tyandas and her company of twelve fought with determination in their eyes, felling hundreds of Imperials before they too, met their end. By the time Master Tyandas fell, however, the backbone of the Imperial army had been utterly shattered, forcing Grand General Kasandra to retreat back into orbit.

Outraged by Irenwen and Kasandra's failure to capture Cyranduas, and unwilling to commit another Imperial army to their command, Grand Mandator Caesarius ordered the Imperial fleet to withdraw. Simultaneous to the final Imperial ship making the jump to lightspeed, the Thirty Second Fleet, under the command of Admiral Vinchauk Il'Chahol arrived in the system, joined by the Starfyre, under the command of a rehabilitating Admiral Quarantar. Upon securing Cyranduas from any remnants of the Empire left behind by Kasandra's retreat, and while admitting that the battle had in fact been a costly stalemate, Admirals Quarantar and Vinchauk relayed the news back to Capricaerón—where word of the brave Heroes of Cyranduas filled a desperate Republic with hope.

While the battle had ended in a stalemate, with the destruction of both Kasandra and Tyandas' armies, the battle proved to be a turning point in the war for the Republic. While President Apollo remained surrounded nearly on all sides by the Empire, he recognised that the brave sacrifice of Tyandas and her men, as well as Quarantar's crushing victory over the Empire during the first stage of the conflict, were potent reminders that hope and resilience could defeat the Empire's superior forces. Indeed, now lacking the destructive potential of the Cyrannic Imperial Battlestation, the Empire was forced to rethink its strategy for situations in which an orbital bombardment was not possible, while Republic strategists studied the tactics of Cyranduas' defenders in preparation for future confrontations with the Empire. 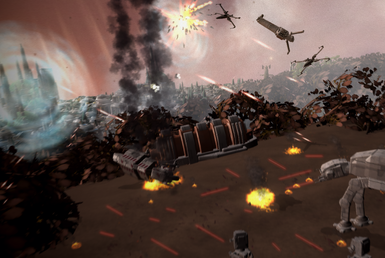 Retrieved from "https://spore.fandom.com/wiki/Fiction:Second_Great_Cyrannus_War/Escalation/Battle_of_Cyranduas?oldid=767651"
Community content is available under CC-BY-SA unless otherwise noted.