For the Glory of our Gods!

Small to once in a while

Rtas'Shagili is a Cogsangui shiplord that serves in the Cognatus Battlefleet. 'Shagili has a long service record that strecthes back to the years of the Intergalactic War, during which he served as second of command aboard Thel'Vicliquam's flagship, the Shadow of Liberty.

After the Intergalactic War he recieved command of his own, and was assigned as commander of the Fervent Devotion. In his role as shiplord he discovered the Atlantica planet known as Aecor at behalf of the Cognatus Empire and became fundemantal in the joined cooperation between the Cognatus and Rambo Nation to study the ancient planet.

Not much his known of Rtas'Shagili's early years. Only that he was born at the Cognatus homeworld, joined the militairy of the Cognatus Alliance and slowly rose in rank and eventually became second in command onboard the Shadow of Liberty, flagship of Thel'Vicliquam. During his time as second in command of the flagship, he became good friends with 'Vicliquam and proudly agreed with 'Vicliquam's actions, while not being affraid of voicing his opinion.

Together with 'Vicliquam he entered the Intergalactic War and supported his commander in attacking various convoys and planets during their incursion of Rambo Nation. In the final stages of the Intergalactic War, when 'Vicliquam launched an attack at the Rambo Capital, he objected to no avail. The entire fleet of the Cognatus suffered and 'Vicliquam went missing. As the war came to it's conclusion, a large portion of the Congatus fleet vanished and 'Shagili returned to the remaining Cognatus forces.

After the war, 'Shagili continued to serve with the Cognatus Remnant and finally the Cognatus Empire, being promoted to shiplord during the first year of the Dark Times (01 NE/05 AQF) and recieved command of the Fervent Devotion.

During the Hunt for the Zevian Skull (06 AQF/03 NE), 'Shagili discovered the Atlantica planet Aecor, where Rambo and Cognatus forces had clashed. Arriving just in time to prevent his former commander, 'Vicliquam to kill a young humanoid girl he announced that their leaders had agreed to cooperate to preserve peace and study the Aecor artifacts together. Furious 'Vicliquam left Aecor, and 'Shagili was given orders to join up with a Rambo Operative, who turned out to be the girl he saved to set up a defensive fleet around Aecor. Weeks later, during the fith month of 03 NE/06 AQF 'Shagilli approached the operative, who was known as Claire Rambo and informed her that Rambo Command had a transmission for her. He adressed her as humanoid, to wich Claire responded that she had a name. Confused 'Shagili responded that he failed to realise how that would be relevant at this point. Sighting Claire soon left for new missions and adventures, leaving 'Shagili behind at Aecor.

Nearing the end of 07 AQF, Rtas'Shagelli remained on guard duty at Aecor and acted as the Cogsangui-ambassador and representative of the Cognatus Empire for Rambo Nation. Upon the Imperial and Unified Order of Cognalorilos attack at Basillica to remove the Primercer from excistence, Rtas only recieved dire reports about the situtation. During the battle he decided to check upon the Zevian Skull once more, something he did more often. Intrigued by its magnificence, a chill ran over his spine when he looked in the empty, hypnotizing and hollow eyges. For no explanation, Rtas touched the crack in the skull and was engulfed in visions, telling him the Eyes of Torment are Tiding. Unsure what it meant, Rtas decided a meditation and prayer might help him what to do with it.

During the Cyrannian Cold War, Rtas'Shagili met with Lord Regent Rambarth Dino II Le Rambo and Apollo during their visit at Aecor. According to various individuals, the Zevian Skull plays a vital part in the so called Battle of Light and Dark. Though disgusted with the fact heretics were allowed to study the artifact, he complied less he would cause a diplomatic crisis with the Rambo. When the individual known as Aoirtae Valaeris touched the Zevian Skull, all were teleported by the powers of the skull to the mythical planet Aldár. There they discovered that the ancient temple of light was under attack by evil forces led by the sorceror Morgandaûr.

Rtas'Shagili rushed to defend the temple, fighting the warriors of evil. During the battle he fought with the dreaded Meketanor to protect the Cretacea Family. The two battled fiercely though the Phaedric Lord outmatched the proud Cogsangui warrior and impaled Rtas's torso with his energy blade. Rtas spat up blood and fell to the ground dead.

His remains were later brought back to Aecor where he was burried by the Rambo and recognised as a proud warrior and protector.

Rtas'Shagili is a loyal, noble and capable Cogsangui. Though he would not hesistate to use extreme force, he would rather try diplomacy first before firing a single shot at his enemies. He is also a fierce believer in his Gods, making him a fanatic religious person.

Though he is a capable strategist, Rtas'Shagili also has a tendency to underestimate his enemies, which was later shown when the Cognatus Fleet had to withdraw from the Rambo Capitol Planet during the Final Battles of the Intergalactic War. After his promotion to Shiplord, 'Shagili became more arrogant and confident of his own abilities as a commander.

During his joined cooperation with Claire Rambo, he managed to develop somesort of respect for the young girl, though still viewed her as a lesser lifeform.

Rtas'Shagili wears a heavy armor, white in coloration with a decorative helmet and an electric sword. 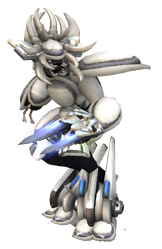 Shadow of Liberty, service onboard as second in command

Fervent Devotion, service onboard as shiplord
Add a photo to this gallery

“You are earned my respect!”

“Not sure about them at all!”

“Lesser lifeforms do not deserve to walk in the light of our Gods!!”

Png file as second in command

Png file as Shiplord
Add a photo to this gallery

“Prove yourself worthy as a Shiplord, and you will keep my respect!”

“You save my life during you timely intervention, you have my eternal grattitude for that 'Shagili!”

Retrieved from "https://spore.fandom.com/wiki/Fiction:Rtas%27Shagili?oldid=755888"
Community content is available under CC-BY-SA unless otherwise noted.