The Rethex'Kalik, Ruiners of Life

“Wherever the Xhodocto roam, the Xhousthoe are close behind. They don't want conquest or power, they just want to make lives a misery.”

The Rethex'Kalik (Okcyzxa: Rethexkailikyyua - Ruin of Souls), better known as the Xhousthoe, are the third most powerful of the 21 Races of Kamik'Shi. They have relation to the Xhodocto, which are classed as 'their demonic bretheren'. The Xhousthoe are equally demoralizing as the Xhodocto, and share similar traits to them.

The Xhousthoe claimed Xyazkoxos's lair, the Realm of Forget, as their new home, where they have stayed many billenia later. Some unknown time later, they would also gain control over the Desolation Hivemind.

The Xhousthoe had a small participation in the War of Ages. Their main role at the time were as scouts for the Xhodocto, but they have also caused much destruction and problem for Onuris.

The Xhousthoe were eventually defeated along with the Xhodocto when Hierarch Kroc defeated Kamik'Shi. When this happened, they disappeared, presumely retreating back to the Realm of Forget.

The Xhousthoe had little activity until recent times. Their first real appearence in years was during the Cataclysm, where they joined forces with the other Demon Races to attack the Universe. They were eventually defeated by Vi'Naherza and Vyro'Nazdea along with the rest of the Legion.

It would not take long for them to return, though. The Xhousthoe joined forces with The Corruptus during the very final moments of the Second War of Black Fog. Being summoned by Angazhar to aid in defending the Corruptus Overworld, the Xhousthoe fought the forces of the Gigaquadrant in both space, ground and in the Realm of Dreams. After Shu'rimrodir was defeated, however, the Xhousthoe immediately retreated.

Many years after the Second Black Fog War, the Xhousthoe were visited by a powerful entity known as Morgandaûr, who was interested in an alliance between them and the demons of the Chaos Realm. The Xhousthoe had a hidden presence in Quadrant 82 for a while now, and were incapable of actually advancing due to intervention of the Rambo Gods and the Atlantica.

When the Atlantica and the Mornûnendur agreed to end their war, however, the Xhousthoe seized their invasions, not wanting to get problems involving the Mornûnendur's alliance with the Xhodocto.

In the following years, the Xhousthoe joined the Dominion of the Xhodocto.

Like all demons, the Xhousthoe have an unusual biology. The Xhousthoe have a very cold liquid running through their body, which is likely to be a pseudometal. Like the Xhodocto, they have membranes which attach to their bone and skin. As the Xhousthoe are in sync with MUC (Manipulative Universal Connectivity) their membranes produce MUC which can be used for many purposes.

Back
Add a photo to this gallery

The Xhousthoe are well known for their ability to ruin lives across many dimensions, but within this universe they are mainly unknown. The Xhousthoe often perform in a way where other species would not approve of. The Xhousthoe are led by Rektethin Xyazkoxos, and follow Mhaz'Veryk as their god, called by them as Rethexkalikyyua Telekhankyyuaxykin Mhazverykxos (Okcyzxa: Rethex'Kalik God Mhaz'Veryk).

The Xhoustoe's main habitat is the Realm of Forget, a region of Chaos not unlike Hell. The Xhousthoe's extent in the First Gigaquadrant was last recorded to be about 350,000 to 500,000 systems, and about 1.4 million planets. However, they remain undetected and no one knows of their location, but it is said that they are occupying Quadrant 82.

The Xhoustoe are the third most powerful of the 21 Races of Kamik'Shi, have great power over Demonic Energy. Controlling the memories of the mortal races that oppose them, the Xhousthoe's greatest weapon is their own enemies. With small effort an empire can collapse because of their power to turn others against each other. They are among the most dangerous of the demon races; sometimes they will even turn demons against demons.

They also seem to control a strange hivemind known as the Desolation Hivemind. 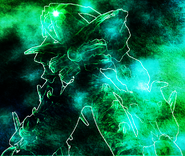 Khuaviiraahz
Add a photo to this gallery

"They're fairly intelligent to ally with us to prevent their destruction..."

"Idiotic! They wish to die?"

“Those bastards. I like that a lot, I must say. They are almost significant compared to others I've seen.”

Retrieved from "https://spore.fandom.com/wiki/Fiction:Rethex%27Kalik?oldid=765494"
Community content is available under CC-BY-SA unless otherwise noted.