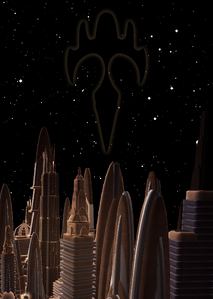 “Thus shall it come to pass, the dying leader shall come forth and bring order and stability to the cosmos and his name shall go down in history...”

Republic Rising is a story about the events that led up to the creation of the First Republic over forty five thousand years before the rise of the Galactic Empire of Cyrannus, a time of perpetual war, sickness and destruction in the galaxy. However, one humble man thrust by destiny would change all of this forever and go down in history as one of the greatest heroes of the galaxy. This is the story of that hero's rise, fall and ultimate legacy.

“Go to the Sovereignties if you want a problem talked to death.”

A loose coalition of planets founded after the Orbispiran-Corulusi War of 52,742 BNE, the Core Sovereignties remained a loose amalgamation of allied planets for much of its history, only becoming more centralised in the face of the brief threats that it could face. Officially, by joining the Core Sovereignties, a planet agreed to lend its military in the face of an attack on another member planet, though due to the rivalries, bitterness and hate that often existed between the member worlds, this was a rarity.

“Brilliant. Ruthless. Unpredictable. The future is indeed dark in the face of such a threat.”

An enigmatic and warlike civilisation, the Phaedric Empire was long regarded as a myth by the inhabitants of the Core until the devastating attack on Orbispira in 45,498 BNE. Led by the mysterious and diabolical Phaedric Emperor, the Phaedra have expanded outwards from their origins on the perpetually stormy world of Antemurale in the Outer Rim, finally bringing them into conflict with the Libertus-held planets of the Core and the Inner Rim during the Pre-Republic Era.

The Phaedric Empire was ultimately go on to battle against the Old Republic for much of the rest of its history, with much of its history being a mystery to historians in the present era, leaving much information regarding the Empire a mystery for thousands of years.

Chapter One: Beginning Before The BeginningEdit

The bright summer day was sinking beneath the horizon on Orbispira and birds could be heard singing to one another as they prepared their nests for the night. On the shores of the last great ocean un-touched by the ever-growing cities, a single Libertus sat on the beach, sipping at an alcoholic beverage exclusive to that region on the planet. Despite the songs of the birds and the distant whirl of passing speeders and launching spacecraft, all was peaceful. As the Libertus relaxed, he noticed a new sound added to the mix, that of footsteps in the sand. Sighing sharply, the Libertus glanced behind him, lifting the sun glasses from his head to get a better look at the disturber of the peace. The figure was an older female Libertus, with a loving smile that hid her deep sorrow. Wearing royal clothing, Praesator Beniara was the leader of the planet.

Cyran'nus took another sip from his drink and turned his head back toward the frothing waves of the sea.

Her hands on her hips, Beniara strode in front of where Cyran'nus sat, blocking his view of the waves. Her son rolled his eyes and sighed deeply.

Crestfallen, a single tear fell from Beniara's left eye and she walked away. Grumbling, Cyran'nus once again turned towards the city behind him, where his mother was heading.

Suddenly, something in the corner of his eye caught his attention. A ship, triangular and dagger-like. One ship became two. Two became twelve. Until an entire armada could be seen descending from the heavens. Before Cyran'nus had time to react, a massive blast consumed the city, sending fiery debris shooting into the ocean. Thrown off his chair, Cyran'nus found himself face down in the sand, only now realising that his planet was being invaded. Getting to his feet, Cyran'nus looked at where his city once stood. Where once was a gleaming metropolis, now there was only ruins and desolation. Collapsing from grief that everything he knew had just been destroyed, he failed to notice that two beings approached him from behind.

Turning his head, Cyran'nus came face to face with the crimson conquerors, a race known as the Phaedra that were considered a myth by those in the safety of the Core Sovereignties. The lead Phaedra raised his weapon to put down the weakened and shell-shocked Libertus, but an attack from the rear decapitated both conquerors in a single stroke. Shielding his eyes from the spray of blood, Cyran'nus couldn't help but comply when his savior picked him up and placed him on his feet. The figure was clearly a female Libertus, though her manner of battle dress was strange, indicating that she was not from Orbispira.

Retrieved from "https://spore.fandom.com/wiki/Fiction:Republic_Rising?oldid=738655"
Community content is available under CC-BY-SA unless otherwise noted.