Refugees of the Unified Nation of Ottzello

Perils of Ottzello
“Why are we still here? We can still feel the pain...still feel the loved ones we lost with us today. Still it echoes in our minds, the screams of those whom we lost. We're already demons.”

The Refuge of Ottzello is an organisation of refugees from the Unified Nation of Ottzello, created following the Score Settling Incident in which the Unified Nation was destroyed by Da Rogue Boyz. Fleeing extinction, the Refuge was created by Tuolog, the only surviving UNOL member, the Refuge takes residence within parts of the Polar Crystal Alliance and remains hidden from the Rogue Boyz.

The Refuge has very little society of its own. Though it retains much of the technology and weaponry used by UNO, it exists as a collective that resides within the governments of which ever empire controls the colonies or region they are residing in. They retain a group mind with UNOS, but it exerts no control over the people, and exists largely for communication purposes.

The Refuge plans to one day claim revenge on the Rogue Boyz. Many serve as mercenaries or soldiers within the Aegis Guard. They swear allegiance to the PCA with high respect for it as UNO had, but their main purpose for living is vengeance.

Following the destruction of the Unified Nation of Ottzello, the single surviving member of UNOL - Tuolog - rushed to deactivate and disconnect as many AIs as he could prior to Da Propa Big Rogue Geek taking them over, and ordering refugees to leave. The new nanomachines system that he used did not exert any control, and was only used for communication with one another and for keeping track of those members. This was to ensure that the system could never be used for enslaving people again, should someone else attempt to use their AIs to slave their people.

As the conquering took place, many refugees found their ships destroyed as they left, while others became food for the Rogue Boyz, who would kill any that were not enslaved by their reprogrammed UNOS. The resulting conflicts were bloody, and left with even fewer surviving refugees.

Tuolog mobilised the AIs, and re-attached them to new warships. He contacted the PCA to inform them that there were a small percentage of UNO members who had survived and were not slaves. Though he attempted to calm them down, many refugees fought with one another, or left to attempt to fight Loron. To satisfy their rage without reprogramming the system once more, Tuolog allowed many of them to join the armies of the Polar Crystal Alliance, such as the Aegis Guard, or other mercenary groups, in the hopes they could fight and kill Loron.

After Da Reckoning, the Refuge led a revolution against the newly reformed UNO.

Galotian - A diplomatic and peaceful race, the Galotians were one of the Refuge's most numerous races, and gear more towards the Refuge's peaceful and domestic life than their typical warlike nature.

Inalton - Soldier/knight race, they mostly serve the jobs as officers and commanders within the nation. They were all strong soldiers, and adaptable to any combat situation.

Ioketa - Peaceful, friendly race who were masters of Essence (mostly Chronoscopic). Living in tribes more than in cities, they will be used for science, for war, for diploamcy, and other things. They were often teachers, and a known as the 'essence gurus'.

Kralgon - The scientists of the Refuge. A race of inquisitive but aggressive people, who were once the worst enemies of Ottzello, the Kralgon were behind most of the Refuge's technology, and were often seen as the brains behind the nation, as well as the military's driving force. 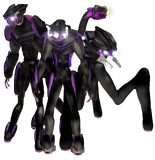 Tralkikianoe - Race of sentient machines, that serve multiple roles within the Unified Nation. While AI technology was widely known throughout the Refuge, it was not as well-used as with the case of the Tralkikianoe. They were made of humanoid, vehicular and structure-like machines.

Ottzelloan Grox - Scientist/military commander race. Past events in the Second and Third Ottzello wars resulted in them desperate for help, thus they changed their ways and joined the Unified Nation.

Ottzelloan Zazane - Another warrior race. Along with the Refuge, they were one of the few to be both recruited and cloned by the Refuge's military. They us both Dark Chronoscopic and Descension to their advantage.

Ottzelloan Grimbolsaurians - Known by Grimbolsaurian as Norosaurians, were a race of Grimbolsaurians who adapted to crime, lack of connection to the Delpha Coalition of Planets and constant war with the Loron. They were often used in labour, military commanders and other areas such as medicine.

Ottzelloan Lequian - Known by Lequian as the Krolequian, were a race of defensive humanoid reptillian creatures. While ordinary Lequian were Knights, Krolequian were a friendly and diplomatic race in comparison with others. Howeer, due to experiences in Ottzello, were still more aggressive and tough.

Ottzelloan Libertus - A subspecies of the Libertus, who, unlike the main Libertus who were the most civil and lawful race in the universe, were vicious, aggressive criminals, thanks to their experiences in Ottzello.

Heeyorian - A race of thieves and merchants, they were smugglers, thieves and bandits, which was how they made a name for themselves. They were well known gamblers, but best known for their popular starship industry.

Boglot - A nasty bunch of greedy people. They were fat, lazy and well-fed by their robotic servants. Often serving as the crimebosses, Boglot were simply economic and criminal masters. Besides from this, they had no usage at all.

Fotoriz - The farmer race of the Refuge. Serving as chefs, farmers and food merchants, they were well known for cooking recipes of all the Refuge species, and best known for their pizza.

Konth - A labouring race. Once thugs and warmongers, their spirits were broken due to their experiences. They mostly serve as a labour force in the Refuge, as well as athletes. Some Konth, however get involved in crime, and become thugs along with the Loron.

Clathos - Similar to the Konth in that they serve as the labour force and were formerly a warmongering race, until their spirits were broken. They were now a civilized race. Unlike the Konth, it was rarer that they become crime bosses.

Loktan - Race of scavengers/scientists, who were very inquisitive. They often serve as engineers, and sometimes as thieves.

Behquiniar - A race originating from Quadrant 21. They were incredibly tough, and fairly strong, giving them the position as police and planetary guards, and sometimes offensive military roles.

Theleam - A bird-like race who believe in spirits, and perform unique ritiuals which were often used as warning signs and even supplements to sirens. They were very alien, come from Cyrannus, and were some of the Refuge's best diplomats.

Verdimihn - An alien race, who were often military commanders, scientists and sometimes diplomats, whcih were strong, intelligent, but slow. They were a collective consciousness, which were added to the Refuge's.

Katel - A race who originate from Ioket, with the Ioketa. They were seen as dark Ioketa, and were essence parasites; they use so much Dark Chronoscopic power they need to feed off it constantly, and can feed on anyone's soul/consciousness, or their blood.

Duletha - A race of weapons scientists, the Duletha had biological immunities to several chemicals, and were perfect at developing and testing new weapons for the Unified Nation, making them incredibly valuable.

Vida'Rranlora - A race of incredibly ancient AIs, the Vida'Rranlora were scattered around the universe in several planet databases. Ottzello's Database was found by the Refuge after it was moved to Borealis, and it now serves as part of the Refuge's group mind.

Telzoc - A race of creatures who were once members of the United Nations of Ottzello until it was discovered they were Vyro'Ralza puppets, where they turned against their allies. An entire new population was created to live freely in the Refuge with blueprints and genetic codes provided by the Divinarium.

Aside from the Loron, the Refuge of Ottzello features every species member from the Unified Nation. They feature far fewer nanomachines, only used for security purposes.

Much like in UNO, each member has engineered inside them a zero-point electric generator as an internal organ of most species. This is an electrochemical gland (electricity conducted through chemicals and solutions) that functionally gives them a power generator within their own bodies. This is used to power the technology that they use, as well as cybernetic organs.

The Refuge of Ottzello is completely subordinate to a few elected leaders and Tuolog. When taking refuge within colonies for other PCA members, they typically adhere to their laws and leaders.

The Refuge uses piece of UNO technology primarily, and many of the engineers create and sell new nanotechnology and spacetime technology throughout the Crystal Alliance. As it does not have the resources that UNO once had, most of its technology is created from scavenged parts.

The Refuge does not partake in warfare in the same way that UNO did, as it lacks the resources or desire to enter war. It may contribute troops towards the PCA's Aegis Guard, which are reminiscent of UNO's soldiers, but it does not have its own official military.

Most refugees do not have their own society, and fully integrate into the society of whoever accepts them. Areas owned solely by the Refuge have a society similar to that of UNO's before destruction.

Refugees both migrate to worlds controlled by the PCA and live in their own space stations. Typically, refugees do not live in the megastructures UNO once lived in, but in shanty towns or in cramped spaces, with a very low standard of living.