Lady
Captain of the Royal Guard

Rambo Nation
Rayria Mary Ramelzen is a young Serindia noble, heir to House Ramelzen who suffered a lot during the Second Galactic War in 0 BQF. Together with her twin brother they are known as the Ramelzen Twins. Rayria Mary is a promising yet reserved, hesitant and insecure noble.

In 12 AQF, life changed for Rayria when she was ordered to be send to the Rambo Capital to serve as a ward for the new monarch, King Rambert Ramveral. He trained and guided her and instead of being a member of his court, she became the youngest Captain of the Royal Guard in history of Rambo Nation, leading the Knights of Ramveral though she isn't aware of all the plots and plans of her king and often kept in the dark.

Rayria Mary Ramelzen is born in 2791 (07 BQF) at Ramalivua, mere minutes after her older twin brother, Ramjon Martin Ramelzen. Since her youth, Rayria Mary has been taught how to act and become a Serindia noble, with her parents hoping she would one day marry another noble family to give her healthy and promising children.

Sadly, during the outbreak of the Second Galactic War in 2798 (0 BQF), her parents were killed by the invading Imperial Alliance while they were present at the Rambo Capital, her other brother and sisters were killed by the dreaded Lizardian as well. Ever since she often felt lonely and sad, having only her twin brother as family and as heirs to their House she often feels the pressure is a lot and feels insecure about herself. During the 1st month of 2805 (07 AQF), shortly after the Viral Outbreak Rayria and the other noble children were forced to leave their school, the Rambo Estate behind due to the threat of the Virals. Rayria simply packed her stuff and said her goodbye to their mentor Augustus Ceasar Rambo, unaware of the Viral threat and the reasons for leaving Koerband. On route to the Rambo Capital, their Raven-class transport came under attack by the Kzishaya pirate Zkhan and a Quadrantia Loron dreadnought. During the choas that followed between the defending Royal Guard and the arriving USS Burning Heretic, Rayria was taken captive by Zkhan and took her with him to his shelter when he was forced to abandon the Raven-class. The entire trip towards Zkhan's shelter Rayria said nothing, but tears of fear rolled over her cheecs. For over a month, she remained a captive of Zkhan until she was eventually saved by Inquisitor Akagêlth and the crew of the USS Excelsior and brought back to her home at Ramalivua.

Rayria's easy life on Ramalivua came to a shocking end in may of 2810 (12 AQF) when her best friend, Ramanei Joy Feather dissapeared and Rambert Ramveral usurped the throne of Rambo Nation. To ensure her house loyalty to the crown, Rayria was ordered to come to court at the Rambo Capital, something she herself and her brother begrudgingly agreed to do so. At court, she was soon trained by his majesty himself as a member of the Royal Guard, and to her surprise she was assigned as the Captain of the Royal Guard. For most a great honor and prestige, for her a great burden. Would she fail King Ramveral, her people and brother would be punished for it. After the fall of Rambo Nation and the death the High King, Rayria returned to her planet during its occupation by the Galactic Empire of Cyrannus. In September 2820, Rayria onboard the HRSS Arthrastral led the forces of House Ramelzen during the battle of Ramgotheria. After the battle, she and Ser Trasram Ramcelsior were overjoyed by the celebrations and the liberation.

In September 2820, Rayria, amongst others of the Loyalist command structure attended a meeting at Ramsoria where they discussed their plan to siege Pauvenris and its prisoners while the Singularim Pact besieged Karzhamarhi-Nui. Rayria decided to join the fleet to liberate Pauvenris and send her forces with them into battle, commanding the Tirith-class HRSS Laioro and participated in the battle of Pauvenris. Sadly, she was forced to abandon her ship as the Laioro was crippled and faced destruction. Her escape pod was picked up by the Loyalist One and as such Rayria was present to pledge fealty and her loyalty and that of her house to Ramanei Joy Feather.

Rayria Mary Ramelzen is a kind and gentle person, having a love for art, music and nature. She can be enthusiastic about learning new things, loves shopping, watching the holo-net and reading. She also likes walking through the forests and watching the various wildlife in their natural habitat. She dislikes hard metal music, people who tease others and has a bit of fear for space travel.

Due to losing her parents, she often feels insecure about herself and her heritage, people often mark her because of it as a lonely and sad person, who is on herself and doesn’t really dare to open herself to others.

The Motto of their house:
Ages Past
Lost from Kin
Returned to the Light
As we Struggle
We Overcome 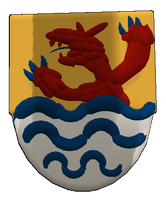 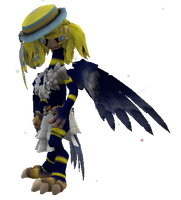 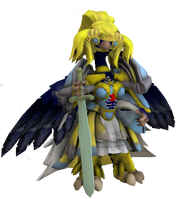 Rayria in Captain of the Guard armor

“They are most dear to me!”