Ramtterson Ramcelsior is an elderly Rambo Serindia pauvenris, member of the once proud and influential House Ramcelsior. Formerly a rear-admiral in service of Rambo Command, he became the head of his house after various disasters that dwindled the influance of his proud house. His House blood dates back to the early days of the Rambo Alliance, and some say they are direct decendants of the deceased blue Serindia kings and queens, generals of the yellow Serindia tribes during the planetary wars.

Though as ancient as House Le Rambo, Ramtterson is fiercely loyal to them and was greatly in doubt in may of 12AQF when Rambert Ramveral usurped the throne from House Le Rambo and crowned himself High King. Ramtterson decided to feign loyalty, though in secret plots to bring the end of Ramveral.

Born in 2523 (275 BQF) at the Rambo Nation colony of Pauvenris as youngest of three children to his parents. After a youth of wisdom, plenty and kindness Ramtterson decided to follow his dreams and become a space captain in service of Rambo Command. Serving onboard a Constellation-Class for years, he was eventually promoted to rear-admiral of the Rambo Command Administation Department (RCAD), around the same time as his collegue Andaurl Ramdorian. Serving at the office for years he eventually switched chair and became the head of the Rambo Acadamy. In the year 2588 (210 BQF) a disaster took place that damaged House Ramcelsior their name as his eldest brother, Marscalcus Ramcelsior personally oversaw a planet buster being used on a innoccent planet. His brother send to the Ramghatulkiaga Orbital Prison, Ramtterson was forced to resign and took up residence at his assigned city at Rambo Prime, known as Château St Selenyia where he continued to live in rather isolation, keeping himself out of society together with his people. After Ramirith and the entire Tigris Colonial Sector was destroyed during the Tigris War, Ramtterson and his people welcomed a lot of refugees. Ramtterson and his family took special care of Ramikku Ramgrath, whom they raised as one of their own.

A bigger disaster took place in 2799 (01 AQF) when the Xhodocto entity, Seam'Dkoa destroyed Pauvenris, the greatest seat of House Ramcelsior. With his other brother killed and most of his relatives, Ramtterson was left with only two grandchildren and became head of his dwindling house. Ever since he has sought a way to bring his house back into society influances, though finds it difficult with other houses viewing them as a failing house.

During lunch at the first day of 2805 (07 AQF), Lord Ramtainus Ramveral met with Lord Ramtterson Ramcelsior and Lord Argathon Froramsilia to discuss the Viral Outbreak at Koerband and the creation of a private fleet for Rambo Prime. The elderly Ramtterson didn't want to hear of it and Ramtainus soon left in anger, leaving a concerned Ramtterson and Argathon behind. Ramtterson asked Argathon to watch Ramtainus for him, fearing that he might do something against the interessts of the Crown and split Rambo Prime in two, one supporting the Monarch and the other Pro-Imperial.

During the fifth month of 2805, Lord Ramtterson attended the Rambo State Visit when Emperor Tyrómairon visited Empress Ramashe again in person. Afterwards he returned to Rambo Prime to deal with the loss of one of their foremost noble house members, vice-admiral Ramtainus Ramveral who perished during the destruction of Angforst by the feared and mythical cyborgs, the Quashowan.

In march of 2806 (08 AQF), Ramtterson grew tired of the Nim-Glaré Concordat and the increasing threat of the Hutter Kingdom and the senate's inability to counter it, he decieved a plan to turn the wheel of the government. By his sources, he learned that a young Balaseara by the name of Dennis George Voltar had a failed meeting with Lord Rambarth, he decided it was time to act. Summoning the reporter to Cardolast at 15 march, he met with the reporter inside a restaurant where he alone was eating. During their conversation, with the promise of the reporter's discretion, Ramtterson gave the material Voltar needed to publish an article to become famous.

Pleased by the article and the following Scandal and media attention it brought, Ramtterson met with the reporter again, though this time in the harbours of the Rambo Capital. This time he gave the reporter information about Chuinaylia her relation with Imperial senator Guolivian. At the 20th of march, he decided to meet with Lord Rambarth himself and made him a proposal, to create one large Outer Colonial Sector and to ensure the influance of the Rambo nobility, Rambarth complied and even agreed to make his granddaughter a handmaiden of princess Ramanei, allowing House Ramcelsior to gain a foothold within the Royal Palace. Satisfied, Ramtterson returned to Rambo Prime.

At 10 may 2810 (12 AQF), Ramtterson Ramcelsior, amongst others were present when Rambert Ramveral crowned himself High King of Rambo Nation after Lord Regent Rambarth Dino II Le Rambo had passed away due to old age in the night. Troubled by this new course of event, Ramtterson begrudgingly applauded Rambert Ramveral after his knights entered the throne room. After returning to Rambo Prime, Ramtterson feigned loyalty and in secret tries to undermine the rule of Ramveral. During this time, he raised a private defense fleet with the powerful Serindia-class battlecruisers and Gozanti-class cruisers as support.

In August 2820, Ramtterson was pleased with the liberation of Rambo Prime by the Singularim Pact though was horrified by the orbital bombardment by the Empire, resulting in the destruction of Rambo Prime City and many lives. Hesistant to risk the lives of his people at Ramgotheria, Lord Ramtterson refused to pledge his support to the Rambo Loyalist cause. In September 2820, Ramtterson, amongst others of the Loyalist command structure attended a meeting at Ramsoria where they discussed their plan to siege Pauvenris and its prisoners while the Singularim Pact besieged Karzhamarhi-Nui. Ramtterson decided to join the fleet to liberate Pauvenris and send his forces with them into battle. Ramtterson himself returned to Rambo Prime.

Ramtterson is a gentle, wise and kind Serindia, proud of his heritage of House Ramcelsior and loving the prestige coming with it. During his years within Rambo Command he has shown himself to be a capable and wise tutor, having patience to learn those who have difficulties as well a keen sight for ordering and administrating finances etc. He is a stern and devoted follower of the Rambo Pantheon. He once dreamed to become the Master of Economics within the Rambo High Council though abandoned these dreams after his brothers and family death.

When he became older, his proud head feather began to hang down, with a painful bent back as well as needing a walking stick he makes a fragile appearance, but don't be decieved, his wits and cunning remain and fully believes in the principles of his family motto and tries to live by them. House Ramcelsior also has their own guard, known as the Ramcelsior Watch and guard Château St Selenyia in honor of House Ramcelsior and the Serindia pauvenris.

Motto:
Our Sword Unseathed
Guarding those underneath us
Ours is the fury
Beware thee who stands against us! 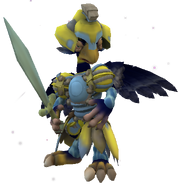 “The last of my family!”

“A proud and honorable man!”

“A wise and gentle person, terrible crimes have been done to his once proud House”