House Ramelzen
Ramjon Martin Ramelzen is a young Serindia noble, heir to House Ramelzen who suffered a lot during the Second Galactic War. Together with his twin sister they are known as the Ramelzen Twins. Ramjon is a promising yet sometimes bold and trouble maker noble.

Ramjon Martin Ramelzen is born in 2791 (07 BQF) at the planet Ramalivua, mere minutes before his younger twin sister, Rayria Mary Ramelzen. Since youth Ramjon has been taught how to act and become a Serindia noble, with his parents hoping that he would one day ascend to the higher ranks within Rambo Command or become a suitable mate for the Royal Dynasty.

Sadly, during the outbreak of the Second Galactic War in 2798 (0 BQF), his parents were killed by the invading Imperial Alliance, his other brother and sisters were killed by the dreaded Lizardian while they were visiting the Rambo Capital, they were killed moments before the Lizardians managed to kill the former emperor, Dino Le Rambo. Ever since he vowed to destroy them but since reaching puberty, he often got his sight on girls and his study.

During the 1st month of 2805 (07 AQF), shortly after the Viral Outbreak Ramjon and the other noble children were forced to leave their school, the Rambo Estate behind due to the threat of the Virals. Saddened to leave his mentor behind, Augustus Ceasar Rambo he spoke no word in defense against Ramashe, and simply packed his bags and said his goodbye. During the trip home their Raven-class came under attack by a Quadrantia Loron-dreadnought and allowed the Kzishaya pirate Zkhan who managed to take his sister, Rayria Mary hostage before being forced to leave by Rambo Nation reinforcements and the skills of the escorting Royal Guard.

He vowed to see his sister freed from pirate hands and made sure that Zkhan became "Wanted" by the Rambo authorities. After Inquisitor Akagêlth and the crew of the USS Excelsior brought back his sister to Ramalivua with no harm done to her, Ramjon thanked both Rambo Nation and the Galactic Empire of Cyrannus for their aid, opening new trade and diplomatic possibilities. In january 2806 (08 AQF), Ramjon pledged for aid with empress Ramashe after the Hutter Kingdom threatened the safety of Ramalivua and demanded an honoration of their protectorate treaty. Ramashe complied and Rambo forces rushed to the aid of Ramalivua, resulting in the Battle of Ramalivua. During the battle many events occured, though Ramjon was pleased with the end result. With his sister safe at the Rambo Capital and Ramalivua saved from disaster, Ramjon returned to ruling the planet and hoped the Hutter Kingdom would remain away from his planet.

By 2812 (14 AQF) Ramjon and his people were forced to migrate from Ramalivua and found a new home at Karzhamarhi-Nui, which became the seat of power for his House. In August 2820, Ramjon travelled onboard the HRSS Tirith to meet with a representative of House Ramcelsior and the Cruandai about the possible whereabouts of Ramanei Joy Feather. Sadly Mandator Ramburgo Ramveral intercepted them and the Tirith was destroyed. Ramjon luckily managed to escape the doomed ship in time and was picked up by the crew of the Cruandai.

Ramjon Martin Ramelzen is a bold and proud Serindia, proud of his heritage and full of anger against his enemies and foes. Smart and clever, Ramjon loves his sister but is far more open and sure of himself. He likes sporting, playing games and card, loves to do extreme sports like mountain gliding and diving. In physical top condition, he is often found attractive by other females and sometimes gets involved into fights or brawls when he tries to defend his own and that of his house pride.

As heir to House Ramelzen, he feels himself sometimes unsure how to lead his house, now only excisting out of himself and his younger twin sister. As the heir to the rule of House Ramelzen, and with the death of his parents Ramjon also is the official recognised consul for Ramalivua, as the planet is a protectrate of Rambo Nation and not a member planet.

The Motto of their house:
Ages Past
Lost from Kin
Returned to the Light
As we Struggle
We Overcome 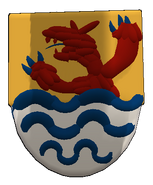 “They are most dear to me!”