Ramendil Ramoval is a Rambo Serindia noble, native to the ruling House of Ramoval of the mining planet Stasje. Once a soldier, he used his past experiences to become one of the Nation’s foremost diplomats, though can be cruel and arrogant to those he views as lesser them himself.

Ramendil Ramoval is born in the year 86 BQF at the mining planet Stasje, a colony of Rambo Nation, nearby the colony known as Koerband. After childhood he joined the military and became a soldier in service of Rambo Command and fought during the devastating and cruel Algernon War. After experiencing the horrors of war and the terrible things witnessed there, he quit the military and began studying politics. Graduating years later he became a diplomat in service of the Rambo Government, tasked with inspecting various issues like agreements in treaties.

He was scheduled to become the ambassador for the Insector Eldarions, though they were destroyed by the Cult of the Deathmarch before he could get the position. In 04 BQF Rambo Nation encountered the Keiternyan Star Empire and Ramendil proved to be vital in ensuring a treaty with the noble Keiternyan. Afterwards he returned to Stasje, where he tries to tighten the grip of the Rambo authorities over the freelancers, miners and hidden criminals, with little success.

At 10 may 12 AQF, Ramendil, amongst others were present when Rambert Ramveral crowned himself High King of Rambo Nation after Lord Regent Rambarth Dino II Le Rambo had passed away due to old age in the night.

Ramendil Ramoval is a nice person, a proud citizen of Rambo Nation who loves his nation. He will do everything to improve galactic relations between the Rambo and other species where it is in his powers to do so. Though he can also be cruel and rude to those he views as lesser then himself, most notably to criminals and slaves held by other species. He is proud to be of noble heritage though finds it difficult to rule over Stasje.   His House sigil features the blue wings of a Captratsia, emerging from it a Nocturnial with a pshychic blast Motto: Bravery come forth! 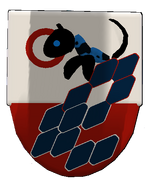