Ramdard Ramthrace is a Rambo Serindia senator in service of the New Cyrannian Republic. Once his house was a minor noble house from Rambo Nation and vassal of House Le Rambo, until Ramdard decided to become a Republic citizen during the Second Galactic War. Ramdard and his people were among the first to colonise New Capricaerón, a colony within the Quadrant Galaxies which remained independent from the Galactic Empire of Cyrannus and rejoined the Republic when it was reformed. Now, he serves in the Senate, hoping that the Republic will grow strong with the help of a rebirth in Republic-Rambo Relations.

A proud man he became the vice-president with the outbreak of the Second Great Cyrannus War, serving within the cabinet of President Apollo.

Born in 48 BQF at the Rambo Capital, Ramdard lived his live in peace and prosper, able to study at the university to become a politician. When in 03 BQF, Rambo Nation made first contact with the Capricorn Sector Alliance he soon became interessted in the Libertus hailing from the Cyrannus Galaxy. The first Cyrannian extragalactic colony in modern times, New Capricaerón was colonised as a symbol of peaceful cooperation between the Libertus and the Rambo Serindia, with both races enjoying dual membership of the growing colony and with Ramdard Ramthrace as it's senator to represent them for the newly formed United Republic of Cyrannus and attend senate meetings at Orbispira. Ramdard soon became close friends with Lord Ram'Lendila, a member of House Le Rambo and ruler over the Rambo Nation Cyrannus Colonial Sector. Together they integrated the Rambo and Republic people to live together in harmony, prosper and peace, eventually resulting in the construction of the proud joined colony of Ramaprica. He then settled himself at Ramaprica, a planet of great importance for the Cyrandia Alliance and symbol of cooperation between the people of the Cyrannus Galaxy and the Quadrant Galaxies.

During the Great Cyrannus War Ramaprica came under attack by the fiendish Zillum, an evil and cruel Mortalitas who destroyed the planet, killing all it's inhabitants. While Ramdard was at Orbispira at the time, he was shocked and unable to attend to his people due to the war efforts. His parents died during the attack and he began searching for another planet that could replace it. At the end of the war, to Ramdard's horror, the Republic was reformed into the Galactic Empire of Cyrannus by the newly appointed Emperor Tyrómairon. Horrified and shocked, Ramthrace was unable to escape Orbispira and "represented" his people.

After a year of Imperial rule, during the sixth month of the second year of the Dark Times, Ramdard met with fellow senators Raen Magalen of Capricaerón, Senator Ilas-Shei of Cora and Mer Mirea of Cruandai for a "shadow meeting".

Together they grew uneasy about Imperial rule and violence and talked about the possibility for an armed resistance, though Ramthrace had little hope for it as Rambo Nation had already fallen as well, it would only endanger his people, though he eventually agreed he was still sceptical about it. He then offered the idea to discuss certain matters elsewhere, as Orbispira wasn't safe to discuss such dark things.

Luckily it never came to happen and upon the forming of the New Cyrannian Republic after the Cyrandia Conference Ramdard Ramthrace found a way to escape Orbispira and returned to New Capricaerón, his seat of power remained his and pledged himself loyal to former Count turned President Apaltar, allowing New Capricaerón to become member of the New Republic and Ramdard became a senator within the New Cyrannian Government.

In june of 08 AQF/08NE Ramdard held a banquet for a delegation of senator to discuss the recent bill president Nexarón Valkistair was to enact. Ramdard welcomed Apollo and Raesa personally upon their entrance, though remarked they were late as usual. While Apollo sarcastically noted it was a "light breakfast", Ramdard simply waved away the notice. Their banquet was rudely interrupted by the arrival of various bounty hunters, who took the senators hostage. He was shocked by the execution of senator Lat'co'in and grew even more angry with them when they injured senator Aneen Daerethal. He tended to her wounds and looked upon the bounty hunters with pure contempt. Before things got out of hands, they were saved by Ryen who dispatched the bounty hunters with his powers. Ramdard and many of the senators managed to escape the senate building before it was destroyed and left in ruins by the detonation of bombs.

After the events at the senate, Ramdard changed his appearance and took a more regal appearance, at his chest a crest with his family sigil. After the events of the Torments that took place at Arcaniox, Ramdard was saddened to hear of the loss of Ramashe. Though he was a member of the Republic now, he feared this might prove problematic for Rambo Nation in the future. His worries and frustrations grew even larger during the first senate session after the Republic-wide elections. During the session he learned that president Nexarón Valkistair issued a special committee of senators to advice his administration on how best to deal with the existential threats, including the Galactic Empire of Cyrannus. A sign that the democratic values of the Republic were shadowed once again. To his horror, he learned that Adelheidis was installed as the senator of Pheobao. He openly voiced his distate and asked Nexarón Valkistair if this was how he honored his predessecor's legacy, he also accussed Adelheidis of being corrupt. He was silenced however by Zare'Anne who also gained a positon within the Senate.

Horrified and furious Ramdard left the session and while it was still ongoing, he feared that both the Republic and the Nation were in peril! Actions had to be taken.

Near the end of october in 20 AQF he joined Proconsul Athan Apostila on a Rambo meeting to discuss the aftermath of the Crossing Line-incident. During the meeting Ramdard grew irritated and refused to accept the vague explanation provided by Lord Ramseph Ramcard and insulted the Lord Hand that he left the matters to a mere child. Even the Proconsul failed to keep him in line as his irritation only grew and wished that the Le Rambo Dynasty would reclaim their rightful throne instead of hiding within the Cyrannus Colonial Sector or at Ramar Shadda.

Main article: Second Great Cyrannus War
Ramdard was at the planet Aldár for a meeting with many officials when they planned the attack to take down the Ecimaex Wall. He continued monitoring the battle from the temple of the Aldárae Order and was horrified when the Empire used the Cyrannic Imperial Battlestation to destroy Mou'Cyran. The Mou'Cyran Cataclysm horrified and shocked Ramdard. As a senior and experienced politician he was first to speak, his voice cracking though after they recieved the Continuity of Government Act transmission. Knowing the importance of a functional government and the need of person of trust Ramdard proposed Apollo to serve as the new President to keep the New Republic from falling apart. Ramdard later witnissed the inauguration of Apollo though warned him of a possible betrayal or the possibility of agressive and immoral military proposal repurcussions. He also remined the president that he needed to from a new cabinet quickly, to keep the New Republic functioning. Ramdard was absence from the military meeting to destroy the Cyrannic Battlestation as the events caused heart arithmetic disorder and Ramdard needed a day of monitoring and medical treatment. To his surprise, Apollo made him the vice-president elect. A position Ramdard hoped to fulfill to the best of his abilities.

A month after the destruction of Mou'Cyran, Ramdard made an opening speech as vice-president elect during Republic Day. He re-introduced Raeon Magalen as the new senator for the Twelve Worlds. During the speech Ramdard and senator Carolausa were shot by the bounty hunter Éaltar Gauisa. Though Ramdard survived, he was brought to the hospital were he was treated for his wounds, for monitoring of his returning heart problems. Ramdard read a paper while he was on oxygen and had various infusion lines for pain medications and supplements. To his surprise the bounty hunter returned and wanted to finish his job. With his dignity intact, he rose from his bed and was prepared to die an honorable death but the timely intervention of the Order knight Arasah Nui saved his life. Glad and relieved, Ramdard returned to his duties a few days later to serve in Apollo's cabinet to lead the New Republic in their struggle and war against the Empire.

In 17 NE, Ramthrace was present on Achiliquin when news reached him that the Twelve Worlds had fallen to the Empire, and that Apollo was forced on the run as the leader of the New Republic Remnant. Eventually, Ramthrace managed to track them down in orbit over the gas giant Pelion, where he joined with the Remnant as an influential leader and counsellor to Apollo. Over time however, Ramdard grew worried as his friend, and president seemingly was losing hope and had strange encounters in the woods of their new base at Harborage. During a tactical meeting, Ramdard voiced his opposition to Apollo for joining the mission onboard the Phoebus but he was silenced by the President and was helpless when Apollo embarked to take the Empire head on.

Ramdard Ramthrace is a kind, friendly and proud Serindia who loves his people and would do anything to keep them safe from harm. Though he can also be stubborn and sometimes be over sceptical about matters.

Ramdard has a love for Serindia Wine and admits that sometimes he drinks to much of the sweet substance. At breakfast, Ramdard likes to enjoy his Javan Juice together with berries, though he despices Korotatoes and seems to be allergic to Anummiae chocolate. Notable fact, Ramdard Ramthrace dislikes the warm humid climate at New Capricaerón, claiming that his feathers stick to his skin and makes him short on breath, though he still remains of New Capricaerón.

House Ramthrace, with Ramdard Ramthrace is a minor vassal house of House Le Rambo, even though they are not citizens of Rambo Nation anymore. Their sigil features a white Pidarrow at a blue background with a white half moon, their proud motto: Sky High We Soar 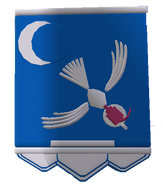 Sigil of House Ramthrace
Add a photo to this gallery

“I consider them friendly”

New png
Add a photo to this gallery

Retrieved from "https://spore.fandom.com/wiki/Fiction:Ramdard_Ramthrace?oldid=852681"
Community content is available under CC-BY-SA unless otherwise noted.