classified
Captain Ramburgo is an elder Rambo Serindia and annointed knigh within the former Rambo Nation, having served in the Rambo Navy he explored the galaxy and gained a tremendous amount of knowledge and experience. Born in the year 2601 (197 BQF). Formerly commanding the USS Kroc, an Akira-Class ship and the USS Krassio, a Quetzalcoatl-class he is a veteran of the Second Galactic War and the Great Cyrannus War. He was appointed Mandator and now loyally serves the Empire with a hatred for the Cyrandia Resistance who killed his relative and lord, High King Rambert Ramveral.

He is the brother of late vice-admiral Ramtainus Ramveral, former Lord of Rambo Prime.

Ramburgo was born in the year 2601 (197 BQF) at the Rambo Capital. At the age of 18 he joined Rambo Command. After graduating he served onboard the Ambassador-class, USS Adelphi under captain Ramaxar. After years, he was promoted to captain and gained command of the Akira-class, USS Kroc. During his early carrer commanding the Kroc he engaged the Rambo Resistance and faced the Lizardian upon their arrival.

Shortly before 2798 (0 BQF), Ramburgo was annointed a knight due to his status as a member of the Noble House Ramveral and his accomplishments so far in service of Rambo Command. During the Imperial Galactic War. When Captain Rambam was hunting the Laberynth he aided him in battle against Imperial forces and arranged a meeting with Master Leezard (with some hesistation) and proved instrumental for the Nigtrion forces to join the hunt. During the Second Galactic War in 2798 (0 BQF) he defended Rambo Prime against the Imperial Alliance.

In 2799 (01 AQF), the Kroc was withdrawn from active service and Ramburgo recieved command of the USS Krassio, a Quetzalcoatl-Class. In 2802 (04 AQF) the Great Cyrannus War and the Quadrantia Disorder broke out. During the 5th month he aided the USS Rutledge to engage the Confederacy of Allied Systems at the Ramsoria Run and managed to disable the vessels. By 2803 (05 AQF) Ramburgo and his crew participated in the major campaign during the third attack at Karzamahri Nui.

After the war he gained command of the Dreadnought-class USS Burning Heretic. Sadly as the Great Cyrannus had ended, resulting in the reformation of the Republic into the Galactic Empire of Cyrannus the Cyrandia Cluster was drawn into the Dark Times. During the battle of New Ramhall he was forced to retreat back to the Quadrantia-Cyrannus wormhole. He later defended the wormhole, giving civilians time to return to the Quadrants before going into the wormhole himself. During the New Ramhall battle the USS Burning Heretic took serious damage and went to the Shipyards of Rowar for repairs.

It remained there until the fourth month of 01 NE/05 AQF) when the Empire attacked the Rambo Capital with the use of a secret wormhole. Leaving the drydocks Ramburgo and his crew battled the Empire' fleet but when they captured Empress Ramashe during a ground campaign Ramburgo stood down and watched in awe as Ramashe was forced to sign the Concordat. The Concordat turned the Rambo into a "protectrate" of the Empire. In the following months Ramburgo decided to remain loyal to the Empress and had little interesst into rebellion movements and attack by the Hutters at the K-7 stations in Quadrant 89. Meanwhile, in the 2nd month of 02 Ne Ramburgo finally returned at Rambo Prime. Giving his crew and himself some time off, he awaits his next orders. In 2804 (03 NE/06 AQF), Ramburgo was assigned to a task force under command of fleet captain Trabl to occupy the planet Yudumarth. Arriving in orbit of the planet, he followed orders of fleet captain Trabl to punch through the fleet, while obtaining damage the superior weapons of the Burning Heretic were no match for the Yudimaran ships and Confederate frigates. While recieving covering fire from both the Excelsior and the Apocalyptor, Ramburgo and his crew managed to break free and deploy it's ground forces so the invasion of Yudumarth became a fact.

Within the hour and a short bombardment the city of Yahvast surrendered and the deployed forces from the Burning Heretic secured the city in name of Rambo Nation. After Trabl forced Aayilah to surrender, Ramburgo remained in orbit of Yudumarth to continue supporting Trabl's efforts to hunt down the Yudimaran responsible for the bombing. During the first month of 07 AQF, he came to aid the Raven-class that transported Ramashe and various children of noble houses who were under attack by the pirates Qur'Trlan and Zkhan. While the USS Burning Heretic overpowered the pirate dreadnought Santiago, Zkhan managed to take one child hostage, Rayria Mary Ramelzen. Unable to persue the small Kzishaya raider, Ramburgo escorted the Raven-class all the way back to the Capital system before returning to his patrol duties.

During the 7th month of 2805 (07 AQF), Ramburgo was dispatched by Empress Ramashe herself to lead a Rambo tasforce into battle within the Cyrannus Galaxy. Consisting out of three Dreadnought-Class, two Miranda-Class and one Constitution-Class he aided the Galactic Empire of Cyrannus during the Battle of Antemurale, defending the planet against the Cyrannian Imperial State. The battle turned into a victory and Ramburgo remained in Cyrannus for a while, aiding the Empire where needed. Afterwards he returned home.

At the second of april in 2806 (08 AQF), after 16:00 hours the Quadrantia Loron besieged Rambo Prime unexpectedly. Though Ramurgo managed to rally the other ships in orbit, engaging the Loron at point blank while covered by fighters his Dreadnought, the USS Burning Heretic was hammered relentless and eventually gave way. He ordered to evacuate the ship and had to look in shame as Quadrantia Loron forces entered orbit and started a ground invasion of his home.

He eventually stepped down and accepted the position as Head of House Ramveral after his brother died. Though he missed the Navy, he began working amongst the nobility to ensure his House influance and represent their interessts.

He eventualy became Mandator of the sector housing Rambo Prime and Starbase 25 amongst others. In 2820 (22 AQF), he grew frustrated with the arrival of the Rambo Loyalist forces at Starbase 25. Though the station fell he ordered most of the Imperial forces in the sector to fall back to Rambo Prime. Aided by admirals Apticyus and Stutgrat he hopes to destroy those he views were responsible for the death of his relative and former lord, the late High King Rambert Ramveral. In preparation of the battle, he assumed command of the Autokrator-class star destroyer ICS Thanatos. During the four day battle it became clear the Imperial forces were unable to hold their ground against the Pact and the Loyalists. Issuing a retreat Ramburgo planned to make a stand at Karzhamarhi-Nui now that Rambo Prime was overrun.

Angered by his defeat and refusing to let his House and resources fall into his enemies hand the supporters of the murderers of his nephew, he ordered an orbital bombardment and destroyed Rambo Prime City. On the 20th of August, Ramburgo and his crew intercepted the HRSS Tirith, the Cruandai and a Gozanti-class of House Ramcelsior to prevent a meeting of noble houses. Aided by the ICS Eternal Empire they managed to destroy the HRSS Tirith but the two other ships managed to evade capture after hiding in an asteroid field.

In September 2820, Ramburgo met with Rector provinciae Schlimm Eklig Statthalter and Mandator Maketh Triggant on Boreas where he gained the permission to execute the final stages of the Quadrantia Contingency Plan. Soon after the meeting Ramburgo became an influential Mandator within the Legatus and travelled onboard the Thanatos to Pauvenris. Shortly after arrival the planet came under siege by the Rambo Loyalist forces and to his surprise they managed to break the Imperial lines and even disable the super star destroyer Executor. Realizing the battle was lost, Ramburgo issued the order to retreat to the eastern sectors of the Quadrants, though only the Legatus forces did so as the Imperial withdrew to the Rambo Capital.

Ramburgo is a proud and normally friendly Serindia. Caring for his crew but has little tolerance for stupidities and incompetence. He believes the Rambo Serindia are a supreme species.

Ramburgo isn't a person to hold grudges, and gets along fine with all other officers of Rambo Nation and is often seen as one of the more gentler captains within the Navy. This all changed when Resistance forces, amongst them Serindia killed his relative High King Ramveral. Having lost hope in his own species and Rambo Nation, he fully supports the Empire and vows to destroy those that dared to rebel against the Royal Crown.

Ramburgo likes cooking, nice meals and wandering among forests. He is also a capable officer and tacticians and isn't affraid to go into battle where he is outnumbered or the odds are against him. As a knight and heir to the rule of Rambo Prime, the Ramveral brothers, noble by heritage created their own sigil! Two blue colored crowned Unirilea unicorns of Rambo Prime at a dark green background. 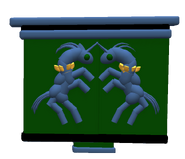 During his carreer, Captain Ramburgo commanded various types of ships.