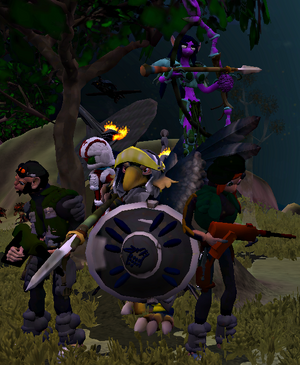 Quadrant Galaxies(origins)
Space in Between (secondary)

Restoration of House Le Rambo on the Rambo Throne

“"The Loyalist are more dangerous than you realize, and its ensemble better equipped than Intelligence believes"”

The Loyalist Ensemble, also known as the Loyalist Fleet, the Ensemble of Loyalist or the Loyalist Military is the military arm of the Rambo Loyalist that aspires to restore House Le Rambo to the throne of Rambo Nation, removing High King Rambert Ramveral to restore peace and prosper. A secondary goal of them is the momunental task of defeating the Galactic Empire of Cyrannus vast military forces that currently holds Rambo Nation hostage by enforcing the Nim-Glaré Concordat.

In doing so, the Loyalist became active supporters of the Cyrandia Resistance, though the Loyalist leader, Lord Ramannis Le Rambo refuses to acknowledge Resistance Command's presumed believes that they have control over the Loyalist forces.

The Loyalist Ensemble was structure was designed by Lord Ramannis Le Rambo, who used his experiences on the Royal Rambo Academy to aid in setting up Loyalist Command. In 21 AQF, Schout bij Nacht (rear-admiral) Jan Michiel Tasman was appointed Supreme Commander of the Loyalist Ensemble. That year the Ensemble established itself as a formidable military power that began threatened operations by both Rambo Nation and the Galactic Empire of Cyrannus.

The Loyalist Ensemble was aligned with the military of the Cyrandia Resistance though fell under the authority of Lord Ramannis Le Rambo and Loyalist Command. The Ensemble included the Loyalist Crusaders (fleet) and attached Escadrons (starfighters) and the Upholders (army).

Main Article: Loyalist Crusaders
The Loyalist Crusaders is the Navy branch of the Ensemble and provides the majority of the strenght of the Loyalist Forces. While only consisting of a small fraction of the ships available to the navies of the Galactic Empire of Cyrannus and Rambo Nation, the Loyalist Fleet was the most powerful single military unit available to Loyalist Command. Due to the scarcity of funds for the Loyalist, most ships in the Loyalist fleet were either captured or donated by friendly/allied individuals and worlds. The fleet was under direct command of Schout bij Nacht Jan Michiael Tasman, the human rear-admiral that formally served within the Kingdom of the Netherlands.

The Upholders feature numerous independent units, well known amongst them are Raven Team and Santa Company.

The bulk of the Loyalist personnel excists out of Carnthedain elves, Chinawkya, humans, humanoids and Serindia

Retrieved from "https://spore.fandom.com/wiki/Fiction:Rambo_Loyalist/Loyalist_Ensemble?oldid=849413"
Community content is available under CC-BY-SA unless otherwise noted.