Legatus
Formerly:
Rambo Nation
The Congregation
Ramantas Ramgrath was a Rambo Serindia officer in service of Rambo Command and Rambo Nation. A proud and clever person, he was seen as a promising officer. Born to the Minor House of Ramgrath, they are the foremost and most influential house within the former Tigris Colonial Sector and rulers of the important planet Ramirith!

Ramantas record included service onboard the USS Hood as a junior-officer until he eventually gained a promotion to captain, with his own command, a Constellation-Class, the USS Hathaway. Ramantas became one of the Tigris War Heroes, fighting during the Tigris War against the dreaded Congregation until his defeat during the Battle and Fall of Ramirith and is subsequent capture by the Congregation.

After he was brought back by a temporal anomaly, Ramantas returned to active service until the formation of the Legatus in 2830, where he became the new Mandator of Ramirith and Tircos and represented his people amongst the Legatus, an remnant of the once powerful Galactic Empire of Cyrannus.

Ramantas is born in 2753 (45 BQF) at the colony Ramirith, stronghold and capital planet of the Colonial Sector in the Tigris Galaxy. Born in House Ramgrath, a minor noble house, Ramantas learned all he could about the Great and Grand Houses of Rambo Nation, helping him through his Acadamy years and eventually becoming an officer within Rambo Command. Proud to serve the navy of Rambo Nation, Ramantas often patrolled the borders of the Tigris Colonial Sector onboard his assigned vessel, the Excelsior-Class USS Hood under command of captain Rambas II as a tactical bridge officer. For years, nothing happened though around 2782 (16 BQF) they did encounter a Lizardian scout, though was easily driven off.

He was later transferred to a ship that had a permenant assignment within the Tigris Galaxy.

Years later, around 2788 (10 BQF) Ramantas gained command of the Constellation-Class USS Hathaway, an old but stern vessel. Around his promotion, during some short range exploration mission outside the borders of the Tigris Colonial Sector he witnessed destroyed planets, devoted of life and burned shells of once promising nations. Unknown to him and Rambo Command it were the first signs of a threat known as The Congregation. During the Tigris War Ramantas became known as one of the Tigris War Heroes, the first to engage the Congregation when they invaded Rambo Colonial Space. During the battle and fall of Ramirith, Ramantas was the last one standing, allowing thousand of innnocent citizens flee their doomed planet onboard freighters.

During the battle Ramantas went missing after his ship was destroyed by the Xhodocto individual known as Dhazhrak, he was captured an brought before Lord Zhuleshxi, leader of the Congregation who turned him into a slave for the Congregation. Tortured and brainwashed, altered in appearance Ramantas became a valuable asset for the Congregation, having acces to his knowledge of the defenses of Rambo Nation, together with the fall of Ramirith, the first major strike against Rambo Nation proved the downfall of the Tigris Colonial Sector, resulting in the death of 24 billion Rambo citizens and personnel.

Rumors have it that after the war, he was destroyed by Dhazhrak himself. After the maiden voyage of the Typhon-Class, USS Tyhpon the Tigris colonial sector was relocated to the Outer Colonial Sector in the Quadrant Galaxies. This change in the space time continuum of the Quadrants resulted in the return of Ramantas Ramgrath, it was he who hailed both rear-admiral Ramnenia Ramfrozen and captain Shivrt to ask for an explanation. After learning of the autocracies he committed after being a servant of the Congregation, he sought counseling but none the less began drinking Huttergut frequently and more than that was good for him.

In january of 2806 (08 AQF), at the 19th he was part of a task force that was send to participate in the battle of Ramalivua to lift the siege by the Hutter Kingdom. Arriving in orbit of the planet, together with the USS Intrepid under command of captain Aur'Luthiaen they cleared orbit of Hutter vessels, though Ramantas soon participated in the ground battle at Skull Temple, though was forced to withdraw due to Bolgrash Bloodhammer and his use of the Atlantican Orb magical powers.

At the 20th, with aid of the Intrepid they managed to disable the D5-cruiser of Anjulius Gaitonius, one of the war lords though due to the intervention of another Hutter vessel they managed to escape capture.

At the 25th of january, Ramantas and his crew participated in the attempt to retake Ramar Shadda and free Lord Ramannis Le Rambo whom was taken captive by the Lady Liandra. Ramantas suggested an unorthodox tactic to retake Ramsterdam, with minimal casualties and damage to the city and clone troopers, both the clone trooper marshall and Empress Ramashe were impressed and gave their consent, resulting in the liberation of Ramsterdam and the opening for the march towards Ramar Shadda City and eventual capture of Lady Liandra and the liberation of Ramar Shadda. Shorlty after the battle, his ship was scheduled for decommission and was scheduled to phase out of active service. Due to his service record and trust by Empress Ramashe, she personally assigned him to take command of the USS Le Normanz, a newly commissioned Delphator-Class wich would become a permanent escort of the USS Quadrantia, the Quadrantia-Class and personal vessel of the Royal Dynasty.

Mandator of the Legatus[]

With the sudden fall of Rambo Nation in 2819 and the formation of the Legatus in 2830, Ramantas saw the Quadrant Galaxies changing as his homeplanet was annexed by the powerful remnant of the once great Galactic Empire of Cyrannus. Seeing new oppertunities and vowing to protect his people, Ramantas became one of the Mandators of the Legatus, rulers of the day-to-day affairs of the Legatus. Ramantas swore loyalty to House Ramveral, albeit begrundgingly.

Ramantas is seen as one of the most moderate and gentle of the Mandators, noble to a fault and beyond corruption.

Ramantas is a proud and noble Serindia, an example for the rest of the fleet. Having a nice and decent command structure onboard his ship, tactial insights and cunning as well as having a large knowledge about Rambo politics. As heir to Ramirith, Ramantas rather likes being onboard a star ship, having adventures and meeting new people. He is fond of drinking Chuchilas Coffee and is fond of Serindia Wine, and apparently is allergic to Anummiae chocolate. Secretly, he has a crush on Ramikku Ramoval.

After becoming a slave for the Congregation, various body parts of Ramantas have been replaced by cybernetic implants and he seemingly has lost most of his speech.

As a noble, he his a member of House Ramgrath, the rulers of Ramirith. 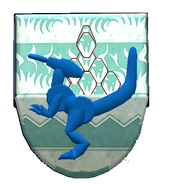 The Png file of Ramantas requires the Dark Injection mod. 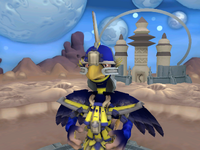 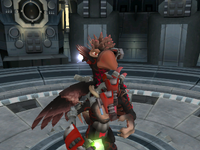