Ramanei Joy Feather is the bastard child of Rambam and Ramashe, though a member of the Royal Dynasty, she has no claim at the throne as her uncle, Lord Rambarth Dino II Le Rambo didn't want it and because of her "bastard" status. Ramanei is a half Serindia/X-Serindia, giving her an teenage appearance way earlier than any normal Serindia would have. Though a bastard, she has shown herself to be very kind, gentle and loving and well aware of her family heritage, hoping one day to be recognised by them. During the unfolding events of the Ortum a Dynastia and the Tertius Bellum, Ramanei was prepared for the role of the new Empress. Things took a change for the worst when her mother fell into a comatose during the Torments in 08 AQF and the death of her uncle in 12 AQF (2810). The death of her uncle sparked the Decumbo Regno and resulted in her exile to the salt mines of Pauvenris, by Ser Rambert Ramveral who crowned himself as High King. While imprisoned she was eventually frozen into stasis at the mines.

By September 2820 (22 AQF) Ramanei was liberated and took her rightful place as the ruler of the Serindia.

Ramanei Joy Feather was born in 2791 (07 BQF), parented by Rambam and Ramashe. After Ramashe recieved her X-452 treatment, after obtaining injuries during the Intergalactic War, she had difficulties adjusting to her new appearance. At one night at the Rambo Capital, Ramashe and Rambam became so drunk that the two had a one-night stand. Resulting later on in the birth of Ramanei. Though Ramashe never told Rambam, Ramashe uncle, Rambarth Dino II Le Rambo and head of House Le Rambo was furious and took away the child so he could foster it in secret, without the public knowing of her excistance nor that it could damage the reputation and respect of their house or of Rambo Nation. Ramanei is aware that Ramashe, the Empress of Rambo Nation is her mother, but is forbidden by her uncle, Rambarth Dino II Le Rambo to speak of it in public. Though gentle and loving, her family looked down upon her, with her uncle, Rambarth even being harsh sometimes on her. While send away, Ramanei only found friendship in the local wildlife at the Rambo Estate at Koerband as she was forbidden to leave the Estate grounds.

In 2804 (06 AQF), during the Quadrantia Disorder the X-452 genes developed and gave the actually very young girl a teenager appearance. Ramanei was tutored by Lord Augustus Ceasar Rambo at his estate at Koerband, a place she was forced to leave after the Viral Outbreak in 2805 (07 AQF). When her mother, Ramashe personally came for her, she had an argument as she didn't want to leave the estate, feeling a prisoner inside the walls of the Royal Palace. A mere glare silenced her and Ramanei began packing, crying when she had to say goodbye to her mentor. Luckily she was allowed to bring her two pets, a Butterfly and her Elechu.

While sleeping in her mothers quarters, their Raven-class transport suddenly came under attack by the pirates Qur'Trlan and Zkhan. Following her mother she saw her best friend, Rayria taken hostage by the Kzishaya pirate before he was forced to leave the ship. At instructions of her mother she went to the bridge to contact her uncle, Rambarth and someone called Apollo.

After returning to the capital, she became friends with Laoi Cretacea and Kara Inviá, often spending her free time with them. She also got to know Apollo better and started to like him, though didn't see him yet as her father figure.

During the fifth month, while playing with a ball in the sea, together with her mother and Apollo, her uncle informed them that Lord Ekrillium just announced that Emperor Tyrómairon was coming to the Rambo Capital to meet with Empress Ramashe in person. During the meeting and state visit, Ramanei was not allowed to be present due to her bastard heritage, though did hide behind the balcony railings, where she was noticed by the Imperial Emperor himself. He complimented Ramashe on her, though Ramashe was not comfortable discussing her and quickly changed the subject. After the Emperor left, Ramanei continued her lessons by the, in her own personal opinion, boring Rambo Founder.

Months later, in the 10th month Ramanei was pleased to know she good be at her mothers side when Proconsul Apollo and Empress Maryah of the Indoctrinate Collective would have a diplomatic meeting. Even more to her surprise, she was to welcome them at the Royal Palace, a sign her family began accepting her more and more! Together with Kara Inviá and Laoi Cretacea who embarrassed himself by tripping and later walking into a Royal Guard at stance.

None the less, Ramanei found it quite amusing though was terrified when associates of the Syndicate, the Cyrannian Syndicate and the Vengeful Claw bursted into the room and threatened them. During the ensuing fight, her mother used her magical powers against the criminals, including winds and lightning while Apollo used his blaster. During the fight one of the ornate chandeliers fell from the ceiling, halting the advance of the criminals. Ramanei was impressed by Maryah who smashed a plate right in the face of Vezktan. Together with Laoi and Kara, they fled the fight and found reinforcements from the Royal Guard and Judge Magister Ramgaarbath. Realising their mission was lost, the criminals tried to escape, though in their flight Emtor shot Ramanei in the back, while she jumped in the target line of the orginal target, Laoi. Gasping for air as blood gushed out of the wound, her life was saved by the healing abilities of Kara. Her mother craddled her hair and brought her to bed later on, telling her she was her heir and a member of House Le Rambo.

During the Senate Scandal in 2806 (08 AQF), she recieved a new handmaiden, Ramansa Ramcelsior. The two became close friends soon afterwards due to their similair likings for fashion, hobbies, television and boys.

Road to Ruler and Captivity[]

In July 08 AQF, her uncle Rambarth Dino II Le Rambo informed her of the terrible fate of her mother. During the events of the Torments at the planet Arcaniox, Ramashe was gravely injured by an unknown assassin and rendered comatose. Now her uncle accepted the position of Regent of the Nation and rules Rambo Nation until Ramanei comes of age, in four years times. Shocked, Ramanei refused to believe it until she saw her mother herself. Devastated, Ramanei refused to eat and drink, weakened and starving until her uncle himself brought down her door and forced her to eat and drink. Her uncle began teaching Ramanei about ruling the Nation, bringing her to council meetings if her study time allowed it. Ramanei grew exhausted, she never wanted to rule but saw it as a burden to learn all these things, though vowed to her uncle and her comatose mother that she would due her best, much to the delight of her proud uncle who seemed to have softened on her.

In the following years, Rambarth tutored Ramanei in the ways to rule Rambo Nation and how the Goverment worked. At 09-05-12 AQF (2810), Ramanei met with her uncle one last time now that he was on his death bed where he expressed his regrets not being able to see her crowned. He passed away shortly afterwards and Ser Rambert Ramveral woke her up and informed her of the loss of the Regent. To her surprise his guards sieged her and dragged her from her room. During the night she was transported in secret to the salt mines of Pauvenris where she was locked up in the Pauvenris Estate, a construction above the actually mines. For two years Ramanei had to listen to the screams and pains of the prisoners while they worked in the mines and were wiped. Ramanei was not send to work into the mines due to her status as princess and out of respect to being the daughter of Ramashe as the Serindia guards would refuse to harm her.

At her 22th birthday in 2812 (14 AQF), Ramanei was frozen into stasis and locked inside a crypt in the Estate, where Rambert hoped she was to be forgotten. Within the mines, a myth was created that a princess walked the walls, forced to watch the horrors of Pauvenris and became seen as an inspiration for the prisoners not to give up hope. Eight years later, during September 2820 the Rambo Loyalist forces liberated Pauvenris and Ramanei from Imperial occupation. While onboard the Loyalist One she met with her uncle, Ramannis Le Rambo and various other Lords who pledged their loyalty to the heir of Ramashe. Much to her horror, she learned that Rambo Nation had fallen in October 2819.

After the liberation of the Rambo Capital later in September, Ramanei was crowned ruler of the Kingdom of Serindialiae!

Main Article Divina Frigus
In early 2850 (52 AF), Ramanei travelled to Lesrekta, a hidden bastion within the Metruia Nebula and adopted homeworld of the Nigtrion. Ramanei presided over the promotion ceremony of Psarnak, who was to be the first Nigtrion captain within the Sacratus fleet. Amongst the visitors of the ceremony were high profile figures as fleet-captain Ramford, Master Zsindra and Lord Psantik and Master Bel. Ramanei provided the opening speech and shortly after accepted the oath of fealty by captain Psarnak.

Ramanei Joy Feather, often colled Joy is a genlte and sweet person, but a bit lonely due to her being a bastard child and not fully appreciated by House Le Rambo. She is decribed since 06 AQF as having a slender yet shapely figure, an intelligent, shrewd and political savvy young woman. Ramanei Joy is determined to prove her worth and make her fellow family members proud of her, a difficult task but she needs to believe in that. She shows a love for gardening, taking care of animals and reading books. However Ramanei can be very stubborn as well, easily upset and angry when things she loves are either taken from her or changed due to circumstances.

Ramanei wears a simple short skirt and tank top with shoulder pads as her common outfit, while in her royal appearance she wears a decorated and ornate white/gold colored armor and helmet crown.

While at the estate, Ramanei actually took care of two Scions, brought from Terra Prime to keep her company. 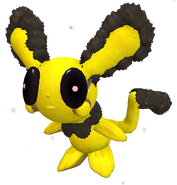 “If Ramanei Joy Feather is no more than a sweet young girl, our enemies will cut her into sweet young pieces to force House Le Rambo on it's knees. Her excistance must remain a secret!”