Rambo Nation
Ambassador Ram'Vell is the long time ambassador of Koerband and is often described as a noble yet arrogant Ambassador. He is a Rambo Serindia and is the one whom rules Koerband with a gentle yet strict hands.

His rule over Koerband is marked by conflicts, occupations by the Imperial Alliance and the Ruin Sector Alliance when the Second Galactic War raged on in 0 BQF. Though under his leadership a cooperation with the Cogsangui about the Atlantica artifact was made as well, peacefully sharing and researching the mysterious construct. The greatest disaster for his planet came in 07 AQF, with the Viral Outbreak. The horrors of that incident left the gentle Serindia horrified and scarred.

Ram'Vell was born in 125 BQF at the Rambo Capital. During his childhood he remained at the Capital until he and his parents moved to the colony of Koerband. During his teenage years he went to school at Koerband and over time grew interested in politics. As such he eventually became the official ambassador for Koerband in 85 BQF, effectively representing Koerband to the Goverment and ruling over the colony. Under his rule and guidance, Koerband flourished and expanded and became a popular place to visit. Sadly, in 04 AQF the Imperial Alliance laid siege to Koerband and Ram'Vell was forced to flee and go into hiding until the planet was liberated in the same year. During the Second Galactic War in 0 BQF, Ram'Vell was captured by the Ruin Sector Alliance and send to work at the excavation side, where the Lizardian had found a remnant or artifact of the ancient Atlantica. Once the colony was liberated near the end of the war, Ram'Vell was fundamental in rebuilding the damage done to his planet and cities and brought prosper and wealth back to Koerband during the Three Silver Years (01 AF-03 AQF). During the Great Cyrannus War in 04 AQF, he allowed the Cognatus to work together with the Rambo in studying the ancient artifact, as such the first building steps were laid down for a cooperation between the Rambo and the Cognatus.

In the evening of the change of year into 07 AQF, Koerband was struck by the Viral Outbreak, killing thousands in a single night. During the night Ram'Vell was busy ordering the protection of his people, though was unalbe to prevent the loss of the entire peninsula, though managed to keep the mainland safe with aid of the clone troopers stationed at Koerband and fleet-captain Bill Silveria. At morning, he met with the fleet-captain gave the order to shoot down anyone who wanted to leave or enter the peninsula, not wanting the Viral Outbreak to spread any furhter and keeping it on the planet.

Saddened by the loss of many citizens, Ram'Vell wondered how long it would take to be overrun, plus if he knew any of the Viral who are currently shot down by his troopers. With only Cardolast and Arthenost as the remaining cities of the peninsula, Ram'Vell was haunted by the many people he was unable to safe.

Three days after the incident he got a message and travelled to Cardolast, where in a cafeteria he met with the honorable Cogsangui warrior, Voro Acetenus and friend of empress Ramashe. Together with his seemingly side-kick named Stench, who really smelled he gave his sad news. He was unable to get Voro on the Western Peninsula, now overrun by Virals as it was on total lock down by Rambo Command. Voro was furious and left the cafetaria at once, leaving a tired Ram'Vell behind.

Ram'Vell is a gentle yet arrogant Serindia. Enjoying his long time rule over Koerband, he often feels himself better than the rest due to his position and wealth. He owns a large summer house at Arthenost and likes staying there as it is less populated and attracts less tourism then Cardolast. Rumors have it he also likes to remain there due to the possibility for criminals to deal there without too much control of the authorities. He seems to like the illegal Sepheria Whisky a lot, something that makes him not at all that noble and vulnerable for blackmail and corruption. However he is gentle to his people and loves his planet and would do everything to protect is against harm. He is also a strong believer in the Rambo Pantheon.

As head of House 'Vell, Ram'Vell is proud of his noble heritage, as well as in the distant descending from royal blood by the female line. House 'Vell sigil is a green Koerband Tiger holding a red sword at a white background, their motto: From Royalty we Roar. 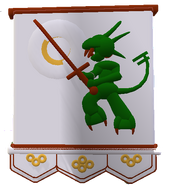 “Not sure if I can trust them”