Qur'Trlan is a Quadrantia Loron Warlord with his main base of operation in the Quadrant Galaxies. Qur'Trlan is a feared pirate among the inhabitants of the Quadrants, with his prized flagship the Santiago. His goal and dream is to rebuild a new Loron Empire under his rule!

Arriving in the Quadrant Galaxies around 225 BQF, Qur'Trlan was confused but saw new chances and possibilities. Convincing many Loron underneath him, Qur'Trlan soon became a Warlord among the various Quarantia Loron leaders and he formed his own band of pirates to explore Quadrant 21, make music and raid other ships, life was good for Qur'Trlan and his band of pirates for years.

Over the years they became one of the greatest and well known Quadrantia Loron pirates, only rivaled by few. The main targets of his band were the Behquiniar and Serlgmec. During his travels Qur'Trlans band of pirates didn't approach Secoolian or Goraurien borders, as their ships were far too powerful for their feighters. In 05 AQF Rambo Nation arrived in Quadrant 21, Qur'Trlan feared his time of raiding and music making was over, as the Rambo had way more powerful ships than the Quadrantia Loron fighters. As such Qur'Trlan travelled to Alethena Metru, and began studying Rambo Nation and their history. Eventually in secret he contacted a shadowly figure of the Imperial Alliance, now known as the Imperial Remnant and was allowed to buy a Mortalitas Dreadnought, which needed heavy modifications to suite Qur'Trlan and his band of pirates their wishes. Modifying the ship at Zevia (his base of operations), recoulering the vessel and changing the interior the Santiago was finally finished and was launched in service in the sixth month of 05 AQF. Now Qur'Trlan would finally have a ship that was able to raid Rambo Nation ships, and bring fear back to the Rambo explorers and the other inhabitants of Quadrant 21. And another great thing about it, he could become the greatest Quadrantia Loron pirate of his time!

During the Hunt for the Zevian Skull he faced Claire Rambo onboard her Ifrit-class star destroyer in orbit of Zevia, together with another Dreadnought they engaged the Imperial ships, though were forced to retreat when the USS Enterprise-A, under command of James Rambo came to their aid.

During the first month of 07 AQF he teamed up with the Kzishaya pirate Zkhan to raid a Rambo Nation Raven-class civilian transport.

While the forward cannons easily disabled the engines of the Raven-class, he was unable to defeat a later arriving Dreadnought-Class. The USS Burning Heretic overpowered the Santiago and Qur'Trlan was forced to retreat, marking his first joined raid a failiure as the reaction time of Rambo Nation was swifter than he anticipated.

He traveled to the shelter of Zkhan to discuss their next move. Aterwards he went to Lianna-station where he was tracked down by Inquisitor Akagêlth and Chianwe Apanoida, refusing to give the location of the girl, he later told what he knew after the Inquisitor drew his energy sabre.

During the 10th month of 07 AQF, Qur'Trlan aligned himself with the re-formed Syndicate and became one of its pirate raiders.

Qur'Trlan is a cruel and mean person, loving his pirate way of living and announcing his arrival to send transmissions with rock and roll, the arrival of the Santiago send shivers among many within the Quadrants. Though cruel and being a Loron saying enough for most, Qur'Trlan also has nicer and better qualities to his personality. As such he likes art, good music and drinking beer with his fellow pirates. Enjoying brawls and breaking things, Qur'Trlan would never harm a creature living in the wild, and as such his also against hunting animals for fun. 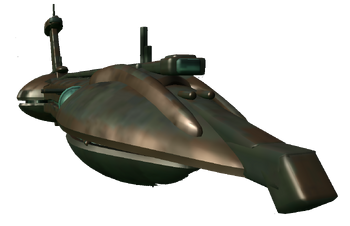 The Santiago, classified by Rambo Nation as the Quadrantia Loron Dreadnought is a ship bought from the Imperial Remnant, a former Mortalitas Dreadnought the Santiago was modified to suite the wishes of their new masters and commanders, the Quadrantia Loron. With a new interior, upgraded thermal shields and weapons, the ship is owned by pirate leader Warlord Qur'Trlan, making him the most powerful pirate leader of his time, and the most influential.

The ship her home station is Zevia, where Qur'Trlan has his primary base of operations. With his new ship the Quadrantia Loron are now able to raid both Rambo and UNO ships. As a roughly cylindrical warship, the Dreadnought's surface is dotted with heavy weapons emplacements, capable of piercing through the shields and hulls of enemy vessels. The Santiago has a lenght of 2500 meters, with a pointed nose that tapers towards the superstructure. Rising from the stern portion of the vessel, is an elongated main communications and sensor pod. Her hanger bay is filled with Quadrantia Loron fighters.

“Pff, claims to be allies!”

“Ah well, their are worser persons in life”