None yet
The Quadrantia Loron are a type of Loron living in Quadrant 21. They aren't physically different from the Loron, but have their own fairly unique cultures.

Once in the past, well over 200 years ago, a group of loron vanished from their home galaxy due to some wormhole or anomaly that appeared out of nowhere. Surviving the event the group of Loron found themselves in a new Galaxy, known as Quadrant 21, one of the five Quadrant Galaxies. This event happened around 225 BQF and upon realising they had no way to return home, the Loron started their own lives in Quadrant 21 as pirates and raiders, and became well known, feared and hated in Quarant 21. Their primary targets became the Behquiniar and the Serlgmec, but the Loron stayed away from the Secoolian borders, of which the Loron only hear rumors of.

Feared across the Quadrant[]

After settling down at various planets, with a primary base at the planet known as Zivia, the Loron started their campaign of raiding as pirates and criminals. Yet they did not only steal spice or gold, once a while they also raided planets for slaves to sell them to others. Living in Quadrant 21 the Loron changed their uniforms, as they feeled they were now one of a kind and unique, with more decoration which many of the Quadrant races have they blended in the society. Soon after, they created their own kind of fighters.

The Loron were left alone and were able to raid until the year 05 AQF, when both Rambo Nation and the UNO arrived in Quadrant 21, creating trade posts and colonies for their own. The arrival of two superpowers meant that raiding became difficult, as the Serlgmec allied the Rambo and the Behquiniar even joined the UNO. As such the Loron were in disarray and conflicts started among the Loron themselves.

In 02 NE, after a period of silent and profitable raids in Quadrant 21 the Loron were shocked that two Empire vessels entered orbit of their home base- Zevia. With Claire in search for the Zevian Skull it brought them to Zevia. Feared it was an attack as the Loron themselves they send two Loron Dreadnoughts to attack the two Ifrit-class cruisers. During the battle, with the dreadnoughts in higher altitude it seemed the Loron gained the upperhand when all of a sudden the USS Enteprise-A arrived under command of Captain James Rambo.

Deciding not to take upon three vessels the Quadrantia Loron decided to withdraw from the battle. However Claire Rambo managed to locate their base and requested an audience with Tec'Tor. Tec'Tor faced Claire and her troopers and laughed at her request for information. Yet when Claire threatened the Quadrantia Loron with the fact that two Ifrit-class stardestroyes and a Rambo Constitution Refit class were in orbit, ready to destroy the Loron base Tec'Tor decided to cooperate. He told Claire the Loron did not find a skull when they raided the Greendion temple and city.

Dissapointed Claire left but the interesst of the Loron was sparked. Seemingly the Empire wanted such an artifact as it would then hold powers- powers the Loron could sell to the highest bidder!

Days later a Qaudrantia Loron dreadnought was seen at Port Station. In the fifth month of 02 NE Tec'Tor allied the Quadrantia Federation in hopes of driving the Empire from Q21. With it he also hoped to achieve to rebuild the once great Loron Empire but then under his rule in Quadrant 21 with others as his subject.

Being Loron, the Quadrantia Loron are incredibly strong, being capable of taking down an epic without weaponry, as well as being incredibly tough, with fast healing skin. The Quadrantia Loron, due to exposure to chemicals, are stronger and tougher than the original Loron; the chemical exposure has had a similar effect as it did on Da Rogue Boyz' Loron.

Quadrantia Loron are infamous pirates of Quadrant 21. They will prowl around the galaxy, hunting and raiding ships around the galaxy. They are often found listening to rock and rap while smashing up everything, and rarely fight without headphones in their ears. They are deadly to any traveller in the Quadrant.

The Quadrantia Loron's technology appears far more advanced than that of the pre-UNO Propa Big Loron Empire, and is of similar abilities (but different weaponry) to that of Da Rogue Boyz - as the two empires are distant, they have not united. The Quadrantia Loron are known to be found basically everywhere.

The Quadrantia Loron society is typical of Loron, being centred around loud, aggressive music, showing off their rapping skills, beating each other up, and evaluating who tastes nicer. And that's when they're not raiding travellers of the Quadrant. Quadrantia Loron are very resourceful, and can recycle any piece of scrap.

Quadrantia Loron, when not living on their planets, have more presence on moons and rocks around the galaxy. It is very frequent that travellers will come across Loron space radio channels when coming across a large group asteroids. It is in these asteroids they have space stations, and will hang out in bars, waiting for someone to kill.

The fighters are agile, swift and equipped with two powerful blast spheres that can disable enemy ships their shields with rapid volleys. The volleys inflict enough damage to other ships to be able to raid them. This makes them able to disable larger ships when working together. Another note of the fighters is that they use somekind of stealth painting, which makes them difficult to see on long range scanners. The fighters hold some quarters for the Loron to sleep in, the bridge, a small bar and a large cargo bay, able to hold cargo, slaves and small vehicles. The only fact the Loron are arriving is listening to the radio freqencies, as the Quadrantia Loron arrive with rock and rap!

The Santiago, classified by Rambo Nation as the Quadrantia Loron Dreadnought is a ship bought from the Imperial Remnant, a former Mortalitas Dreadnought the Santiago was modified to suite the wishes of their new masters and commanders, the Quadrantia Loron. With a new interior, upgraded thermal shields and weapons, the ship is owned by pirate leader Warlord Qur'Trlan, making him the most powerful pirate leader of his time, and the most influential.

The ship her home station is Zivia, where Qur'Trlan has his primary base of operations. With his new ship the Quadrantia Loron are now able to raid both Rambo and UNO ships. As a roughly cylindrical warship, the Dreadnought's surface is dotted with heavy weapons emplacements, capable of piercing through the shields and hulls of enemy vessels. The Santiago has a lenght of 2500 meters, with a pointed nose that tapers towards the superstructure. Rising from the stern portion of the vessel, is an elongated main communications and sensor pod. Her hanger bay is filled with Quadrantia Loron fighters. 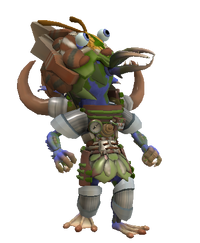 One of the older Quadrantia Loron in excistence, and who still hold information about the old Loron and their empire, he used this knowledge to rise among the ranks of the Quadrantia Loron. Despising the former Lorons he started to create his own base of operations at the planet of Zevia, which made him one of the most influential Loron, if not the unofficial facto leader. His power, wealth and resources to repair and resupply the many ships of the Quadrantia Loron made him prominent and needed. However when in 05 AQF the Rambo and UNO arrived in Quadrant 21, he disliked the decision made by Qur'Trlan to engage them with somekind of new battleship. Though not affraid to go into battle with them, he fears it might attract attention to Zevia, which means less profit for Tec'Tor.

“They deserve our honor!”

“Targets for plundering with rock and roll!”