We are the Grox, lower your shields and surrender your vessel. We will add your biological distinctiveness to our own. Your culture will become part of us. Resistance is futile.

The Quadrantia Grox are amongst the most powerful, dreaded and feared entities in the Quadrant Galaxies. Compared to other Grox, the Quadrantia are more secretive and rarely interact with other Grox or other species at all- they just want to be left alone and do their own matters without interference from others. For countless of years the Grox have lived in isolation, with some minor border conflicts many were ignorant of the Grox. Sadly with the rise of the Galactic Empire of Cyrannus and the fall of the Grox-Meta-Emperor- the Quadrantia Grox began investigating their neighbouring empires, often bringing chaos and death with them.

A notable fact, the Quadrantia Grox have possesion over the Galactic Core of Quadrant 82 and formerly 89 before the Tormented Events.

When news reached the Quadrantia Grox of the defeat of the Grox-Meta-Emperor, the Quadrantia Grox began exploring the threat-level of nearby empires and came into contact and conflict with Rambo Nation multiple times. Yet the encounters were only with a single sphere, resulting in great Rambo losses. It even destroyed a joined Rambo-Imperial taskforce near Proogency. It later tested a air-born virus to mutate entire populations into Quadrantia Grox resulting in the short Serpentaxy-Quadrantia Grox Wars and the creation of a hybrid.

Afterwards, the Quadrantia Grox noticed various ships enter their home territory and were contacted by an assimilated Apollo of the Cyrannian Neraida- who suggested a re-connection with the Giga-matrix. At first the Q-Grox refused, viewing both the Cyrannian Grox and the Cyranai Grox as imperfect and lower life forms and ordered them to prepare for assimilation. However Apollo gave proof to the Quadrantia Grox- who analysed it and came a a new conclusion. Though unknown to the others, the Q-Grox secured data (like the hypercube and type III sphere) from the others and joined the newly formed Neraida Gigamatrix though remained rather secretive and within isolation. Around the same time it had a few more encounters and battles with the Serpentaxy and the Rambo. until its dissolution. With the fall of the Neraide Gigamatrix years later, the Q-Grox remain strong and in isolation, with the population of the Quadrants mostly still unaware of the threat they pose and the power they wield.

The Quadrantia Grox have large areas of space in all three known Quadrants, while in Q82 and Q89 they also have possesion over the Galactic Cores.

The Quadrantia Grox only use two kind of ship-classes, a sphere and a hyper-cube. The primary role for their vessels it to patrol and protect Quadrantia Grox space, send fear into their enemies or tresspassers and assimilate all who come by.

All Quadrantia Grox Spheres and cubes are equipped with the same weapons and defense capabilities: 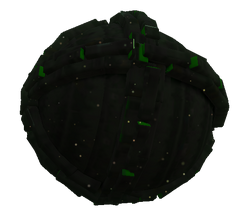 The most common ship class of the Qaudrantia Grox are a spherical design ship, classified as Grox Spheres. Though they are rarely spotted there power is feared across the Quadrants. Encountering one means you entered the Quadrantia Grox their territory. Until 04 AQF, none has ever survived an encounter with a sphere, better to say none has ever escaped their assimilation.

The Quadrantia Grox sphere comes in various classes, though all look the same and have the same size as it is the most efficient way to assimilate enemies:

The spheres have an average size of 600 meters. 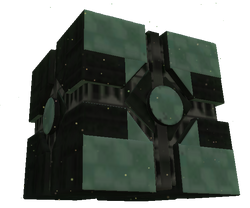 The Quadrantia Grox Hyper-Cube is the most powerful ship class in the entire Quadrants, rumored to have a crew complement of over 2 million Quadrantia Grox. Rambo Nation indicates that a single hypercube is able to wipe out the entire Rambo armada without recieving significant damage.

The Quadrantia Grox do not believe in alliances, as they consider all others below their standards and inferior lifeforms. Though they do classify other empires and nations with a threat-level with what they --Note: It is their own in-fiction opinion and not that of dino.

“Inferior, prepare to be assimilated”

“Our protocol is clear, avoid them at all cost!”

“Gah. There are things like these in the Quadrants too?!”

“Another inferior Groxic race. They will learn that the Omega is Superior”