This galaxy no longer exists. You may not settle your fiction in it.
The Pristini Galaxy was converted into the Virgo Birch Planet. For fiction interacting with this structure, refer to this page.

The Introduction to this article is written from the perspective of First Gigaquadrant scientists, rather than being an omniscient account of the facts.

“You can also build one with approximately the mass of a galaxy too...”

The Pristini Galaxy was a galaxy located near the First Gigaquadrant that was collapsed by its major Kardeshev III civilisation to form the Virgo Birch Planet. Initially, the galaxy was referred to as the GGA, or, Galactic Gravitational Anomaly when calculations on the trajectories of dwarf galaxies nearby its former position did not match up with what was observed. A very close comparison of the records of the most ancient civilizations seemed to indicate that there was once a luminous object at the epicenter of these anomalous dwarfs. The theoretical calculations of the mass the anomaly needed to have to affect its neighbors in such a way lead to the conclusion that this object had to have the mass of a large galaxy. Thus, the name "Pristini" was given to this vanished galaxy, Pristini meaning "Former".

Intricate scrutiny of these ancient records by xenopaleontologists and astrophysicists alike eventually lead to the conclusion that the galaxy began to dissapear somewhere between 1.5 billion and 1.2 billion years ago, with no mention of it being made, except for as the same observed gravitation anomaly, after 600 million years ago. However, due to the lack of accessible records covering this period, there was a large margin of error in this determination.

The magnitude of the force needed to accomplish such a feat staggered the astrophysical community once the results were published and left many questioning if this was a natural phenomenon, or the doing of some previously unknown and immensely powerful entity. One thing soon became abundantly clear to the astrophysicists that continued to study the former galaxy though. The missing mass had affected the trajectories of nearby dwarf galaxies that formed after the 600 Mya cutoff...

With the data from the currently existent galaxies, it was estimated that Pristini most likely contained at least six spacefaring civilizations that were on-par with the current Gigaquadrant powers before merging into one. No ancient xenoanthropological artifacts have been confidently attributed to any civilizations arising in the galaxy however, and it is unknown if they may have visited Gigaquadrant space.

The Pristini Galaxy was located in the constellation Virgo, at right ascension of 13h 18m 54.8s and a declination of −21° 02′ 21″. This puts the Galaxy's former position 22 million light years from the Milky Way, or approximately 5 million light years from the nearest galaxy, Cyrannus. This positioning means that the galaxy did not fall inside any space currently considered part of the Gigaquadrant.

The Pristini Galaxy contained approximately 800 billion stars, making it a significant galaxy within the local region of space. Including dark matter, the galaxy had a mass of 1.5 trillion Solar masses, which was calculated from the observed effect on other galaxies. The galaxy was a barred spiral with a medium equatorial bulge and two major arms. At its center, Pristini had a supermassive black hole with a natural mass of 4.6 million solar masses. In the scientific literature, it's existance was inferred from the type of galaxy Pristini was and the object was dubbed K37 Gem 9. No wormholes or other interspatial phenomena that connect to the Pristini region of space have ever been discovered. 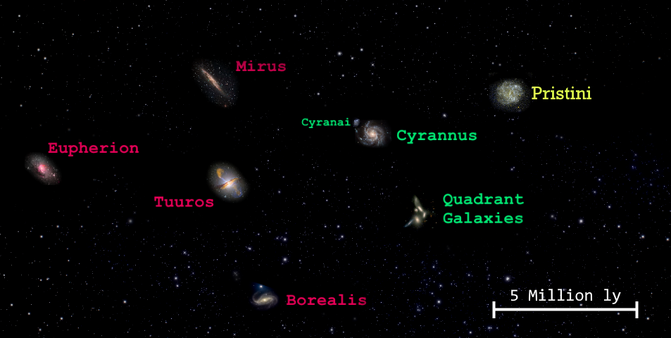 As a large galaxy, Pristini had 21 satellite galaxies gravitationally bound to it between about 50 and 1,000 ly away. One of these satellites, the Praeteritum Dwarf Galaxy had a close encounter with the mass of a galactic disk in the past, causing it to throw off a stellar stream of very diffuse stars, similar to those seen around the Milky Way and Phradox Galaxies.

All satellite galaxies except for the Praeteritum stellar stream no longer exist.

It likely took several billion years for intelligent, technological life to emerge from within the galaxy. These civilisations would have had similar views of the sky of any other member of a large spiral galaxy, even able to make out some of the satellite galaxies depending on their homeworld's position. Many spacefaring empires emerged and started to make their small marks on the space around them. As technology developed, empires spread across their neighboring star systems and many different species traded, cooperated, conquered, and colonised. The space infrastructure of many species grew, constructing orbital habitats and large space stations. Eventually, the first O'Neill and McKendree cylinders were constructed, followed by the first orbital rings in the coming centuries. The continued development of space infrastructure lead to the development of star systems that could capture more and more of the host star's energy.

On the planetary side, advances in power generation and construction technology in many empires lead to the evolution of planets spanned by one ecumenopolitan city, each hosting trillions of citizens. This marked the advancement of such civilisations into Kardeshev I status. Despite the construction of space infrastructure becoming easier, the majority of sapients would not live in space until the mid-to-late portion of this millenia-spanning period.

Intelligent empires quickly expanded across the quadrants of Pristini. Technological development lead to the construction of the first Dyson swarms from the slow disassemblage of rocky planets lead to new magnitudes of energy becoming available. Eventually, star-lifting technology became advanced enough in many empires to begin extraction of metals from the stars themselves, giving access to enough matter to build whole dyson spheres to capture 100% of a star's energy. This was the dawn of Kardeshev II civilization in the Pristini Galaxy. Shkadov thrusters were employed during this time to move the location of whole stars to more strategically, and industrially favorable locations.

Revolutions in black hole science during this period lead to the development of hyperspatial travel which resulted in a whole new level of interconnectedness between the major galactic powers since the galaxy could be crossed in a timeframe less than an individual's lifetime.

At some point in the history of Pristini, all smaller Kardeshev II empires had merged into a single Kardeshev III civilisation known as The Builders. It is unknown whether this was due to an alliance and merging of several quadrant-spanning K2 civilisations, or one hyperpower colonizing and absorbing all others in the galaxy. As a K3 empire, the builders had constructed Dyson spheres/swarms around all the stable stars in the galaxy. They possessed advanced stellar manipulation technology which meant they could turn larger stars that were too unstable to colonize into multiple smaller stars, building many spheres. The hydrogen from some of these stars were instead used as fusion reactants to produce the vast amounts of solid matter needed to construct the matter to surround these spheres. The satellite galaxies of Pristini were also colonized, although the sparse stellar density of the Praeteritum Stream made it an inefficient candidate for colonization. During this period, K37 Gem 9 was also colonized and its vast rotational energy siphoned off to at as an additional energy source. radiation from the artificial accretion disk late into this period would have been visible as two plumes of X-rays exiting the poles of the galaxy at this time.

It is unknown how long the Builder Civilisation reigned over the Pristini Galaxy, but is estimated to be at least 500 million years.

1.5 to 1.2 billion years ago, the Builders eventually began the slow process of driving every star into K37 Gem 9 to start growing the hypermassive black hole needed for the core of the Virgo Birch Planet. This event is referred to as the Great Contraction. This was done by the conversion of all stellar Dyson spheres into Shkadov thrusters to gradually move each system towards the center of the galaxy. The was done at subluminal speeds over a period of at least 500,000 years. To prevent overcrowding at the galaxy's center, many of these star systems were coagulated into more compact stellar and intermediate-mass black holes that were the actual objects fed to the supermassive black hole. The gravitation wave radiation from the frequent black hole merger events that occurred during this process would have been observable from the Gigaquadrant galaxies.

Diffuse matter such as interstellar dust and dark matter was manipulated on a large scale by some unknown means into altering trajectory towards the supermassive black hole as well. Local clouds of matter were condensed into new stars, which were then built into Shkadov thusters and moved in much the same matter as normal stars. Dark matter and non-baryonic massive matter was condensed into artificial black holes and then also sent on an inward trajectory.

This process continued until all 3 duodecillion tonnes of galactic matter had been fed into the black hole. Over this collapsing period, the geometry and luminosity of the galaxy became very distorted when viewed externally. The Great Contraction is the reason for the Pristini Galaxy's destruction and present invisibility. The construction of the resulting Virgo Birch Planet was completed approximately 600 million years ago.

Retrieved from "https://spore.fandom.com/wiki/Fiction:Pristini_Galaxy?oldid=852711"
Community content is available under CC-BY-SA unless otherwise noted.