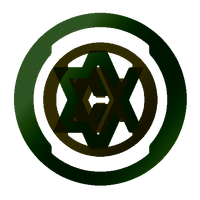 “My rule has been distinguished and fruitful for those who know their place.”

The Primercer is a once powerful Oikoumene who led their mighty domain during the Apotheosis Era of history. Though he was once a just and fair ruler, his growing hatred for Tyrómairon ultimately led to his fall from grace and his ultimate fall from power. With the exception of the Mornûnendur and fleeting interventions by Chaneonix, the Primercer is the only known Oikoumene active in the universe. When he was reawakened during the Dark Times, he assumed control over the Cognatus Empire and used them in pursuit of his ultimate conflict with his nemesis, the leader of the Galactic Empire of Cyrannus, Emperor Tyrómairon.

“Your power is but a fiction, Protector. If you cannot protect yourself, how can you possibly live up to your title?”

Like all Oikoumene, the origins of the Primercer are shrouded in mystery. However, by the time the Apotheosis Era began with the sparking of various rebellions against the Oikoumene, the Primercer had already led the Council for several thousand years. In the face of the widespread rebellions, the Primercer personally believed that exterminating all beings involved would be the most logical thing to do, a belief that was threatened by Tyrómairon, who instead persuaded the Council to instead place the rebellious races under the control of the Oikoumene once more.

After the activation of the Licent during a battle between the Neraida Gigamatrix, Bisistar Domain and the Cognatus Empire during the Dark Times, the ancient AI gained control over the Cognatus, and commanded Vos Adamae to discover the resting place of the Primercer, who was sealed away on the planet Rossá. After months of searching the planet, the Cogsangui warrior eventually discovered the Primercer's ancient tomb and proceeded to activate it, slowly awakening the Primercer from his timeless slumber. In the days that followed, the Cognatus Empire began to change beyond recognition as the Primercer and the AI Licent began to assert their "divine" authority over the zealots. However, the Primercer had only a single being on his mind, the utter destruction of Tyrómairon, who became the Emperor of the Galactic Empire of Cyrannus several years previously.

“Were it not for Qulmé's counsel, I would have de-constructed your very being to nought but brain cells and scatter you across this lifeless world.”

- The Primercer, displeased with his Blade after the events of Carthaniapian.

Sensing the awakening of his nemesis, Tyrómairon sent several of his acolytes to deal with the threat. Meketanor, Vandorallen and Agonânghâsh managed to infiltrate the Cognatus homeworld and launched an assault against the Primercer and his new minions. However, though they managed to destroy the Licent, they failed to match the power of the Primercer, who banished them from his sight as a message to Tyrómairon that he too had increased in power. With the first major battle of his ancient struggle over, the Primercer knew that Tyrómairon would wait for his next move. Several weeks later, the Primercer began to set his plan into motion, gaining control over the Orothil'Tastran Hermitage by announcing his nature as one of their gods.

Later, as the New Cyrandia Wars erupted, the Primercer enthralled a new servant to serve as his frontline warrior against the might of the Dark Lord's acolytes. Naming this Cogsangui, the Blade of the Primercer, the ancient Oikoumene commanded him to strike against the Imperial planet of Concord, resulting in the world's fall to the Cognatus and the beginning of a new conflict between the zealots and the Imperials. However, this conflict was merely a front behind the true war between Tyrómairon and the Primercer, with both seeking to gain the upper hand by influencing the political events of Cyrannus.

During the Wars, the Primercer travelled to the ancient planet Phaedron where he defeated Mormuadáin in combat and awakened his old follower Qulmé from her timeless sleep. Together, their power grew to new-found heights, leading to the Emperor officially forming the Phaedric Order to defeat them. During the second year of the Wars, the Primercer and Qulmé rescued the Blade of the Primercer from torment inflicted by Venatorius and Agonânghâsh, where he berated his follower for his failure.

“You have always been mine to do with as I please. Now, submit, lest all that remains of the infamous Dark Lord be a haze of burning dust.”

Several months later, the time had come for the final confrontation between the Primercer and Tyrómairon. Though Qulmé urged him to retreat while he gathered his strength, the Primercer dismissed her concerns and awaited his enemy with a calculated precision. When a joint Galactic Empire of Cyrannus/Unified Order of Cognalorilos armada arrived in orbit over Cognalorilos, the Primercer watched as his mortal defences failed, even sensing the death of the Blade of the Primercer at the hands of the Phaedric Lord Maethoruin. However, he had little time to dwell on these events before Tyrómairon arrived. Coldly dispatching Qulmé to non-existence, Tyrómairon entered the Primercer's domain and after a brief and bitter exchange between the two a battle of cosmic proportions broke out.

Though evenly matched, the arrogance of the Primercer proved to be his downfall. Upon his fall back to Cognalorilos, Tyrómairon viciously and sadistically drained his energies and tortured him with the mortal sensation of agony. With the last of his strength however, the Primercer revealed that an unknown enemy of the Dark Lord was preparing to return, troubling Tyrómairon to the point where he hesitated for several moments before finally banishing the Primercer from corporeality forever.

“You... think you have won, "Dark Lord", it is an illusion. I can discern all possible paths of this existence and your... victory will be all for naught. He will come, esteemed Protector. And everything you have built will be undone.”

- The Primercer in his final moments of corporeality

In the aftermath of the Primercer's defeat as well as his revelation that an enemy unknown to all but Tyrómairon would soon come, the Dark Lord kept the information secret from his fellow Mornûnendur for the time-being, while simultaneously preparing for his arrival. However, the defeat of the Primercer did bestow upon the Emperor an unparalleled level of power he had not experienced since the days prior to the return of the Primercer. Meanwhile, the Cognatus Empire became rudderless without their leader and soon lost dozens of systems to Voro Acetenus's Order before finally coalessing under the banner of Vos Adamae.

The Primercer's legacy was ultimately deep and long-lasting, though its true extent remains to be seen.

A large Oikoumene, the corporeal Primercer possesses the ability to shift his shape just like many other members of his own species. However, in his most commonly assumed form, he appeared as a large saurian figure standing over seven metres in height. One of the most notable things about the Primercer's appearance is his regal suit of armour which displays his position of great power within the ranks of the Oikoumene Council. This suit contains an elaborate head-dress that makes the former Oikoumene ruler instantly recognisable.

“Primercer. In all my years, I have come to realise that you are a bigoted, self-centred and feebleminded excuse for a leader.”

The true nature of the Primercer's personality is unknown to everyone but himself. However, Tyrómairon once categorised him as being "bigoted, self-centred and feebleminded", an analysis that the Primercer himself would deny. Confident in his power and his lofty state on the top of the cosmic "food-chain", the Primercer is by all accounts an extremely proud individual who angrily reacts when his power is called into question. The Primercer is a true believer in Oikoumene supremacy though is perfectly willing to violate some of the Oikoumene's most sacred laws, such as the great shame that comes from attempting to kill another member of their race. However, while all of this is negative, the Primercer's strength of will and intelligence provide points of redemption to the ancient Oikoumene leader.

“You understand the hierarchy that exists in the universe.”

“My foot shall fall upon your throat.”

“Your awakening was not expected. My error in keeping you alive will be rectified.”

“Oh, Ancient Lord. May your knowledge lead to the domination of the Cognatus. May your piercing eyes cast our enemies alight!”

“A new leader of the barbarous Cognatus? He will bend to our will if he wishes to retain control over his people.”

“When you lie broken, our dominance is assured.”

“I will enjoy slicing your throat open!”

“The lunatic among Oikoumene! Good thing the master replaced him!”

“Chaos brews in Cyrannus once more.”

“The Primercer! The acient ruler of all Cyrannus, with influence no doubt tretching into all Mirus! All the research I put into even collecting the tiniest his era. They are few, yes they are. They are bits of date and pieces of relics. They are true collector's items...Many hidden, many in the hands of those that do not deserve to have them! But not anymore! I made sure of that...I put them in the museum they do belong in! My museum. I oversaw that personally, yes! And now I realize...He truly is the great embodyment of the Cyrannian past! Oh, how noble he is, how great and how wise he is! How much he would known about that what once came to pass in his galaxy I can only phantom. Oh, grand being, oh, true ruler of all Cyrannius, I thirst the ancient and venerable knowledge you no doubt possess! My sources are few, but from them, I can certainly conclude that your rule was righteous! Oh, how much would Cyrannus prosper if it was under your rule once more! Sadly, your era is long gone. And the rumors that you have returned in the Unknown Regions are not historically traceable. Now I can only dream of what it would be like, should he still be able to visit my galleries and throd my collections. But I fear that is a fool's dream...for now.” 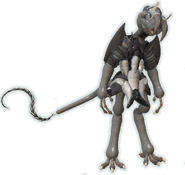 Retrieved from "https://spore.fandom.com/wiki/Fiction:Primercer?oldid=739609"
Community content is available under CC-BY-SA unless otherwise noted.