1 IA
“I do solemnly declare that I will serve the Council of the Polar Crystal Alliance and the citizenry of Hyperborea truthfully, diligently, impartially, and fairly and uphold the fundamental rights and status of equality for all sapients; I am bound by my promise to keep and preserve the peace according to the law with the best of my ability while I hold the office of warden and guardian of Hyperborea.

Let the Aegis Guard serve and protect; forever and always.''”

- Universal Oath of the Aegis Guard

The Aegis Guard is the name given to the military and police force of the Polar Crystal Alliance. Serving as an unified military force composed of all members of the Alliance, the Aegis Guard is called at times when the integrity of the entirely of the galaxy or the safety of Hyperborea are put at risk. As the fist and weapon of the Polar Crystal Council, it is composed of some of the finest soldiers of Borealis, all highly skilled from the lowest to highest hierarchy and eager to prove their worth in the name of their galactic order.

The Aegis Guard, serving as both a military force and a police, is widely present in shared Alliance space, with its focus being the Victory Nebula where Hyperborea is situated. However, they hold no power in the territories of individual member states and are largely a defensive force, with offensive tactics being considered uncommon in their routine. The Aegis Guard was created to protect rather than wage war, as its name implies, therefore forcing the Alliance's members to always ensure their own military forces are prepared for offensive attacks in the event of war.

The Aegis Guard was formed at the first year of the Ice Age, in the last months of 2,791. Grand-Commandant Tarenian Konran of the Zoles Imperium was picked by the newly formed Polar Crystal Council to serve as the leader of the Alliance's military and police force, despite arguments that a Niaka should be the one leading the Alliance police rather than anyone else, all which were disregarded. Due to Hyperborea's sheer size, the Aegis Guard's early years were considered rather difficult due to the sheer amount of space they had to patrol, leading them to employ robotic drones while the number of recruits was still not sufficiently high. Attacks on Hyperborea including the Benefactor's insurrection and the New Wranploer Legion's assault on the Council Tower led to the deaths of many Aegis Guard recruits, culling their numbers and briefly causing a noticeable drop on new members due to fear of death.

The defeat of the New Legion, however, brought a new sense of hope to the Alliance, who used the victory as a way to advertise the power of the Alliance, with many recruits citing feeling a patriotic desire to give the Guard another chance after the incident. The first major scale offensive done by the Aegis Guard would take place during the Cataclysm of the Neutral Zone, where they lend their support to the Pax Infinitus Armada of the Mou'Cyran Accords in order to destroy the Corruptus Overworld Brezank once and for all.

The Aegis Guard is structured in an hierarchy possessing four steps total, going from the everyday officers to the leaders of the organization. However, it has to be noted that the true maximum leader of the Guard is Arkarixus, the Warmaster of the Alliance and head of all its military-related affairs no matter how minimal. The de jure leaders of the Aegis Guard are the High Colonels, with Tarenian Konran serving as their direct link to the Polar Crystal Council and indeed Arkarixus himself. The Colonels come directly under them and serve as the Alliance's most valued military leaders, who are in turn followed by the Commandants who are tasked with leading over sectors of Hyperborea. The Officers are the everyday recruits of the Guard which easily make up for over half of its total number and serve as the primary law enforcers of the Alliance.

Regarding member races, the Aegis Guard possesses officers from virtually all of its member states, though its numbers are primarily made up of Zoles, Nilito, Niaka and Paladians. In the following years of the defeat of the Wranploer, many Murgur and Borealis Zazane have also begun joining the ranks of the Guard for matters of experience and also to keep in good ties with the Alliance. Races of the Unified Nation of Ottzello are common to be found as officers with the exception of Loron who are not trusted to the task. Of the empires who compose the Council, the Rovegar and the Seagon are the least common in the Guard, the former out of a general lack of interest in the Rovegar folk and the latter for the Seagon's low population making them a rare sight in Hyperborea to begin with.

While the Aegis Guard does all in its power to protect Hyperborea and the interests of the Alliance, it does not serve as a substitute to its member states's armies and navies. In the words of Colonel Konran, "We protect, but we do not babysit". Additionally, the Aegis Guard holds no power in the Alliance's member states unless they deliberately allow it, and unlike the Penumbra Unit, they are not considered above the law and are most certainly not expected to try. Cooperation between the two organizations sometimes take place, but due to the Penumbra Unit's nature as a black ops branch of the Council, these are left classified from public knowledge.

“It is through hard work that Hyperborea will remain the safest haven of Borealis.”

Tarenian Konran is a female Zoles who serves as the administrative head of the Aegis Guard, serving as its representative in the matters regarding the Polar Crystal Council. As the leader of the Guard, it is her responsibility to ensure the protection of Hyperborea and its surrounding space, and she has shown herself to be greatly dedicated to her role. Before being given her rank, Tarenian was one of the Grand-Commandants of the Zoles Imperium, sharing the title with famed figures such as Vekaron and Asraels which made her an obvious candidate for the role. 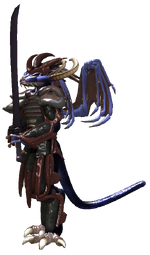 “Survival is the most prime of instincts. The protection of our Alliance is a matter most primitive yet it shall never be ignored.”

Khortaavis Chisalka is a Borealis Zazane hailing from the Merchant Fleets and among the most powerful of his race in the modern era. Widely famed for wielding the cursed katana known as Sin's Edge, he is one of the wisest and greatest members of the Aegis Guard, being one of its oldest admirals in age. Khortaavis serves as a role model for other Borealis Zazane, being a figure of justice who is not above culling the unjust should they refuse the opportunity of redemption.

“The AG are good people; firm and very militant, but they share their loyalties with the people. The idea of a police force consisting of people from all over the galaxy gives me hope that the PCA is on the right path to setting Borealis straight.”

“Aside from the Kormacvar Legacy, this is the first line of defense for the galaxy. All invaders will fear our might!”

“Don't ya jus' 'ate police who can't be bribed easily?”