Phoebe Barask is a young female Quadrantia Humanoid living on Terra Desaria, there she studied and gained her medical degree. Allowing her to specialise on Scions, she is one of the few people within the Quadrants who can heal Scions and known their anatomy and physiology. She hails from House of Barask, the former rulers of Terra Desaria. By 2820, she joined master Oakster in fleeing the Quadrants in hopes of taking arms against the suppressive Galactic Empire of Cyrannus. Joining the Rambo Loyalist faction as a medic she was assigned to Raven Team.

Phoebe Barask was born in 10 BQF at Terra Desaria within the palace of her father, Duke Barask, the rulers of Terra Desaria and it's inhabitants. Raised as a noble woman and heir to her fathers rule, she learned to speak and behave properly. During her childhood she was given a Licky as a pet, who remained a loyal friend of her ever since. Sadly, ten years after her birth, shortly after the Quadrant Galaxies were drawn into the Second Galactic War, House Barask was upsurped by the Hand of the King, Sinistaria who became the new ruler of Terra Desaria. Going into hiding, Phoebe began studying and eventually graduated with a medical degree in 06 AQF. Always interessted in the mysterious Scions, Phoebe decided to become a Scion nurse and opened her own Scion Center in the main city of Terra Desaria, located at the bank of the river. Soon Phoebe became well known and liked, though none seem to know that she is part of House Barask, something she wishes to remain a secret. Using the Rambo Galactic Holo Net and other holo nets she could recieve, she learned of the excistance of professor Kjac, a person she one day hopes to meet.

As the Galactic Empire of Cyrannus invaded the Quadrant Galaxies after the fall of Rambo Nation in 2819 Phoebe soon fled the Quadrants after meeting with Oakster and became a private medic in service of the Rambo Loyalist resistance faction. By March 2820 while on Plerax Base, Phoebe met with the Creckel warrior Creckagni Shatterhorn who assigned her to Raven Team. With the team assembled he introduced her to the other members: sergeant Yvenne Thalyssaera, corporal Anessa Ravencrow, corporal Oakster, private Yosh Vanderhoek and the druid Amdír Windrunner.

In April 2820, Phoebe participated in the successful battle of Umbrax when Raven Team arrived to reinforce the Loyalist forces under command of the Watcher cousins. During the battle Raven Team deployed guerillia tactics that eventually ensured the liberation of Umbrax with aid of the native Velocitar and the seventh legion under command of Judge Magister Ramhis. In July 2820, Phoebe participated in the siege and liberation of Impaerusqiantia.

Phoebe Barask is a kind, earnest, honest Scion nurse who take care of sick and injured Scions, but will confront a Scion trainer or summoner if they are not properly caring for their Pokémon. Phoebe is also noted to be correct and properly speaking against all due to her noble status, clever and intelligent she one day hopes to meet with Kjac so all of the Quadrants can learn of the wonders of the Scions.

After joining the Loyalists, she donned their humanoid outfit and became trained in the use of a blaster, something she hopes never to use to take a life.

To help her duties, Phoebe has her own Scions, a Licky. 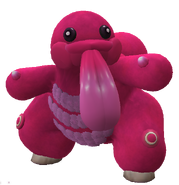 Phoebe's Licky is able to treat minor injuries as well

“I guess they are friendly”

“Better be caerful around them!”