Ozax
Watchers Beyond the World 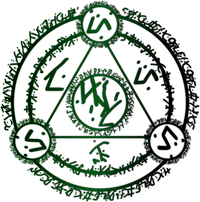 “You might not feel it; you're probably uncapable of. But they are watching you. You, me, all of us. Observing the one thing they profoundly wish to make part of their personal, ever-expanding wasteland of chaos and madness: everything. A destructive swarm of depraved freaks that, no offense intended, make all of our ‘omnipotent’ deities feel like mere ants to them. I wish they were here just to destroy us, give us all a quick death; but no, they prefer to enslave us, torture our souls, mortal or not, for the rest of eternity, while we see them stepping and spitting on everything we have ever considered ours.”

, Blessed by the Above), known mainly by the term Ozax (Zalax Common: Swarm Folk), are a collective group of Chaos Monsters associated with Aberric Energy. The Ozax, unlike the other branches of Chaos Monsters like the Samut’angar, have had little contact with the wider First Gigaquadrant and remain a highly alien, little understood threat to the First Gigaquadrant. The Ozax inhabitant the plane of existence of Marrow, a freezing cold realm that spreads as the Ozax drag more and more realities to become one with the realm. While other Chaos Monsters have the desire to destroy and kill, the Ozax have a natural desire to dominate instead - Ozax hierarchies in Marrow are complex, widespread, and above all divided. Ozax fight and despise one another as much as they fight and despise life from the universe, and the ruins of former realities that journey to Marrow intact become the beginnings of new Ozax kingdoms. Ozax are, while viciously rabid and aggressive, capable of reason and staying their wrath if they are given the incentive to do so, and many throughout history have summoned individual, powerful, reality altering Ozax to make dark pacts and deals with them. Deeply religious and highly militaristic, the Ozax are infinite in population, and all worship their lord Khivarinkthaurix, their creator and ultimate god, and view his own direct creations, the Heirax, as “angels” of a sort.

The origins of the Ozax, alongside most other Chaos Monsters, are unknown. The study of Ozax, derisively termed as Ozaxology, has not produced any solid answer on the origins of the Ozax. Unmanned expeditions into Marrow have only given various theories on how the the Ozax came to be, and the most widely accepted theory is that the Ozax are far older than the universe and were born shortly after Marrow first manifested in Chaos. Following the creation of the Heirax, the Heirax birthed the Ozax to inhabit Marrow and to serve as its own denizens and invasion force so Marrow could satiate on its hunger for planes of realities. The Ozax lacked any considerable presence in the First Gigaquadrant until approximately 1,000,000,000 BC, when the Ultraterrestrial Valkar inadvertently entered Marrow and “kicked the hornet’s nest”, setting off an interdimensional invasion of the Valkar that ended with the rapid extinction of the Valkar and the cessation of their civilization. One of the Valkar’s outposts, the Eupherion Galaxy, was caught in the Ozax’s rampage and rendered lifeless in a matter of years. Following this event, the Ozax kept their presence away from the First Gigaquadrant, and rarely attacked en masse - Eupherion faced only a few invasions from the Ozax across a billion year timespan, conducted out of desire for “food”, sport, and simple entertainment, or to taunt the already dead Valkar by repeatedly destroying their creations.

In between these invasions of Eupherion, the Ozax were, nonetheless, still highly influential in the inner workings of the galaxy. Cultists dedicated to the Ozax were found across the galaxy, and Therusist religions across the galaxy more often than not included the Ozax in their pantheon. Politicians, crime lords, and corporate leaders could sometimes be tempted with the power of the Ozax, and many of them would make pacts with Ozax entities - in return for their service, their worship, or certain deeds and sacrifices, these people would be granted immense power over Aberric Energy, knowledge, divinations of the future, favors, and even command over minor Ozax armies. One of these individuals during the end of the Zalax would partake in a deal with the eldritch god Quorak-Tal, and would eventually become the demonic entity Kharaahk as prt of the deal. During the War of Ages, the Ozax were not found, refusing to participate and staying within Marrow.

In the overarching Ozax society, the Ozax follow a type of kratokratic heirarchy where the strongest rule. The “king” of the Ozax is, and has always been, Khi’voranix as his Ozax manifestation of Khivarinkthaurix, of who is worshipped as a supreme god by the Ozax. Stronger and more intelligent Ozax are regarded as the leaders of Ozax below them, and as such the strongest Ozax often lead enormous Ozax “kingdoms”, designated in Gigaquadrantic terms as “realms” and given a corresponding letter and number for identification. Realms can be shaped to the desires of the leaders controlling them, and are very diverse from each other and are infinite in number, needing classification. These Ozax leaders are designated as Aberric Lords, as to distinguish them from the more “demonic” Samut’angar. Aberric Lords are universally extremely powerful and complex, often so complex and powerful that Marrow is the only suitable place for their existence and should they manifest in the universe they would tear reality at the seams. Aberric Lords hold immense powers over reality and time in Marrow, and to a lesser extent, holds powers over reality in the universe they are interacting with. Aberric Lords are figures worshipped by mortal cults, and oftentimes figures desiring great power will commune with an Aberric Lord with desires of power or wealth. Aberric Lords themselves have no need of any offering a mortal makes, and are under no obligation to honor a pact or even answer a summons in the first place. Aberric Lords will mainly bless mortals with their power or wish out of entertainment, not unlike watching an animal in a zoo. Aberric Lords, because of their power, aren’t referred to under an Ozax species. Their shapeshifting means that they are a class of their own, and Aberric Lords are documented with the same number and letter as their realm, though with “lord” replacing “realm”.

The Ozax language, known as Khaûr, is considered complex, brash, and hard on the ears and mouth. Those well-trained in the art or those afflicted by Aberric Energy can speak the language flawlessly, though still have to learn the meanings behind various symbols. The written language is parts pictographic and parts alphabetical, and words not capable of being drawn will be written with a vaguely alphabetical system. Words that can be represented as pictographs will be represented as such, an example being the Khaûr word khazkhurakazhikan (pictured), meaning eye of slaughter - referring to Angazhar. Khaûr has special supernatural qualities intrinsic to its nature as the language of a group of Chaos Monsters, and as such is often used by Ozax occultist circles. Khaûr, when written, can serve various purposes if given incantations derived from Aberric Energy. Khaûr is often used to imbue weapons with Aberric Energy, summon Ozax, and create “magical” books by writing in Khaûr. Khaûr can even be used as a highly dangerous cognitohazard, and those reading a certain word of Khaûr can be struck dead instantly should the writer wish. Learning and writing in Khaûr has been banned almost entirely by the civilizations of Eupherion, and utilizing it at all permits an instant death penalty. Finding written Khaûr on any surface or digital platform entails the dark presence of occultists, or worse, an Ozax itself.

The behavior of the Ozax range from rapidly aggressive and destructive, to cunning and manipulative. All Ozax naturally possess extreme malevolence, stemming from their Aberrix Energy composition and as such hold truly immense disdain for mortal life. Lesser Ozax are often likened to unintelligent animals, “wildlife” of Marrow that serves as food for larger Ozax or as particularly gruesome pets and servants. Lesser Ozax are extremely aggressive, even to each other, and when loosed on the universe will slaughter nonstop until they are put down. Oftentimes, the stronger the Ozax, the more intelligent and analyzing they are. Ozax naturally desire to dominate other individuals, Ozax or otherwise, lesser than themselves and will go to great lengths to accomplish this goal. Ozax, as mentioned, form enormous kratocratic social groups with a strict heirarchy - where one Ozax commands all those below it. To satisfy their desire to rule in certain ways, the most powerful Ozax will answer summons and bestow great power on certain individuals while keeping them in their debt, allowing the Ozax a stake in reality as well.

The Ozax are designated in various “orders”, or castes, of demon, of which are all dependent on their morphology and ability to use Aberric Energy. Of the third dimensional members of the Ozax that the Eupherion Galaxy is concerned with, the Ozax orders range very widely, and are not nearly as numerous as other dimensions of Ozax. The orders range from the animalistic and aggressive ‘Swarm’ demons that commonly appear throughout the universe, to the immensely powerful and conniving ‘Concierges’ that attend the many Aberric Lords of Marrow, all of which are of an extreme threat to the well-being of Eupherion and the wider Gigaquadrant. Demons of a particular order are all generally similar in appearance to one another, though there are notable exceptions among the Ozax; Swarm Ozax are all of varying appearance, and many of them look radically different from each other.

Retrieved from "https://spore.fandom.com/wiki/Fiction:Ozax?oldid=844437"
Community content is available under CC-BY-SA unless otherwise noted.