Osha Stefani is an Ortella, and populair female singer within Rambo Nation around 05 AQF with her first song "Shot a Rambo". Though young, she hopes to make a carreer in the Intergalactic Community. Young, populair and cute, she is also known for her notorious reputation as party animal, often found drunk after those parties.

In later years, she continued her reputation as a party animal and singer, though also explored uncharted or rather unknown planets in Rambo Nation space for the Quadrantia HoloNet Discovery Channel! Though it meant she had no time free for another album.

Osha Stefani was born in the year 17 BQF at the Cyrandia planet known as Ramaprica. She went to school and high school, where she studied art and music, and eventually began writing songs for other performers at the age of 18 (01 AQF), earning her a nice income and with it she met a lot of other famous singers.

When Osha turned 21 in 04 AQF, she decided to sing her own song, which she began writing herself. However in that year Ramaprica was drawn into the Great Cyrannus War when it came under attack by the Confederacy of Allied Systems and was conquered. Later on Osha managed to escape Ramaprica, and days after it was destroyed by the dreaded General Zillum.

Filled with grieve she moved away from the Cyrannus Galaxy and migrated to the Rambo Capital, located in the Quadrant Galaxies. There she bought an appartment in the crowded city of Amnuvallionia. Overcoming her grieve she returned to writing her own songs and finally in the year 05 AQF she released her first song, "Shot a Rambo", which gave her at once a #1 spot in the Quadrantia Net Musical Hitlists. She surpassed the bands Intergalactic Band and the Mirus Intergalactica and the couple Kekta and Hekta. However experts believe these four singers will probably dominate the top of the hitlists for the remaining of the year.

Yet her musical carreer came into danger when the United Republic of Cyrannus was reformed into the Galactic Empire of Cyrannus and started the Dark Times. Further more the annexation of the Rambo colonial sector adn the following battle of New Ramhall and withdraw of Rambo forces from the Cyrannus Galaxy meant that Rambo were growing distrustful of Cyrannians. Yet her due to her own cunning, and that of her manager Osha managed to get a clearance to perform both in the Quadrants and Cyrannus.

Near the end of the 2nd month of 01 NE (or the 8th month of 05 AQF) Osha was asked by the Founder himself to perform at a concert at the Rambo Capital together with Kekta and Hekta, two singers from the Kraw Galaxy. Osha was delighted and agreed, she always wanted to give a concert with somebody else. Upon her arrival she was honored to meet the two ET-singers and both prepared themselves in a luxerous hotel (at costs of the Rambo Goverment) for the coming concert. Osha became a bit nervous when the Founder told her it was a Nation wide live broadcast, as she never did that before. Though with the aid of the two Kraw she managed to perform just fine at the concert, which lasted for hours and was the most visited and watched concert at the Holo Channels.

Afterwards Osha began planning a new album, and tried to find ways to perhaps even get a concert within the Galactic Empire of Cyrannus. In the fourth month of 03 Ne/06 AQF, at behest of Empress Ramashe she was asked by Ram'Lendila to give a private concert to two fans. These two fans turned out to the daughter and son of famous diplomat Apollo. Osha didn't had to think twice and give the concert as a suprise for the both of them. She sung and danced with them for over an hour before she had to leave again for another concert. After meeting the two children, and the concert later that evening it was the first concert where she didn't get drunk afterwards but went straight to bed.

Near 08 AQF, Osha was seen less and less on stage, as she herself wanted to explore the Quadrant Galaxies and visit uncharted planets after she recieved a contract from the Quadrantia HoloNet to do such a program for its Discovery Channel. With a famous singer as its lead person, the program became one of the most popular on the HoloNet among teenagers. After the fall of Rambo Nation in 2819 (21 AQF) and the subsequent relocation of the Quadrantia Ortella population back to the Cyrannus Galaxy, Osha managed to use her status to remain in the Quadrants albeit as an Imperial citizen.

Osha Stefani is a kind person, though can sometimes be a bit of a snob due to her musical carreer. She thinks highly of herself, and always want to be in the middle point of the attention. As such, she has no problems that the entire Nation knows her personal life. Acting happy and alwasy having fun, the burden of being famous sometimes is too much for Osha and she needs a time out, some criticizers believe her to be instabel.

However as being kind and taking time to sign signatures, she is loved by her fans and even by those who aren't fan of her style of music. A gifted song writer and singer, her voice is considered one of the sweetest of her time. She also likes to dance, and often practice for her songs. A devoted singer you can say.

Yet her love of party (and her alcoholic consumptions) made her a target for criticizers and the media, who love to make pictures of her when doing dumb things (walking over cars and even worse). Though Oshe herself doesn't care, as she believes she has the right to do so as she is still young.

The sound records of Osha Stefani, with all her songs! 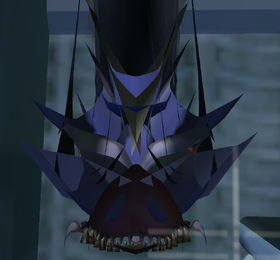 “Hmpf, this female singer her songs are more for the youth than for traditional citizens like myself”

“I love her songs, as I am a fan. She is a great and fun singer, and likes parties too!”

“Though her single Shot a Rambo sounds great, I am unsure if I like the mix of pop and rock”

“I'm a bit of a singer myself. Although, since I have enhanced vocal cords that can mimic any sound, I'm probably cheating.”

The Png files might require the Dark Injection mod