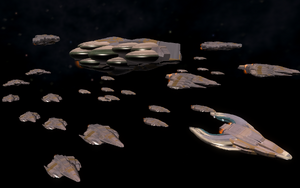 The Orothil'Tastran Hermitage is a reclusive society that dwells within Cyrannus's unknown regions. Their elisiveness means that the sight of their signature silver-and-gold starships is a very rare sight outside the poorly-explored Timarsera Region.

This reclusiveness does not mean the Hermitage's vessels are weak however. Fearful of raiders, the Orothiltatrii - a subspecies of Draconis transplanted to the Cyrannus Galaxy over a hundred millennia ago - created designs inspired by the precursors they now worship. Intending to instill o ntheir enemies that to fight them, was to incur the wrath of the ancients.

A simple and easy-to-build design. The Tir'Shakor class frigate was designed primarily for in-system partols and wolfpack flotillas. One of its primary purposes is to act as a scout vessel and early-warning unit. Equipped with transwarp drives and an EMP unit, the Tir'Shakor class works best in combat as part of a large unit.

Due to their abundance and mass-produced nature, they can be crewed by no less than six personnel without any impediment to operating performance. The vessel's small size and advanced magnetic drives grant it an incredible level of maneuvreability against larger ships. 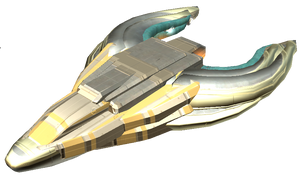 The original Ter'Veri class crusier was built by the Hermitage's precursor as an answer to the increasing numbers of marauders attacking theri space. Fitted with an advanced hyperspace drive and interdiction field emitters, the Ter Veri was designed to pursue marauder bands, bar them from FTL jump and attack with incerceptors. The interdition emitters themselves are deployed by the two curved arms at the rear of the ship.

The relatively expensive cost of such high-ernergy equipment means that while these ships are foten used in frontier sectors, the Truthkeepers make every effort to preserve each one as each interdition emitter is a valuable asset.

When the Hermitage formed, the elder council agreed to use the design to furtheri ncrease their presence. While thie ship is formidible at its job, the focus on the enrgy-hungry interdiction fields and advanced hyperspace drive mean that effective lone-wolf operations are virtually impossible. To adapt, Ter'Veri often operate in hunting teams of five to twelve. 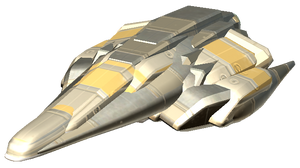 Built as a frontline vessel. The Ter'Veri class crusier serves as the mainstay of the Truthkeepers' navy. Unlike several other classes, the Ter'Veri's desgin is focused on sheer firepower and is equipped with a backup reactor for intense firefights.

Like all of the hermitage's vessels, there are a series of EMP emitters built into the design in order to whither down a target's shields and subsystems. The Ter'veri features similar design aspects to the much younger Vor Sh'Shari battleship such as fins and peripheral fin structures designed to house larger weapons. The Ter'Veri was in fact the last ship class designed until the Orothiltastrii reformed theri empire into the Orothil'Tastran Hermitage, making this design one of the last of the "old-era" models.

Nonetheless, the Orothiltastrii have taken greak pains ot keep this venerated design up-to-date. with the latest threats such as the Cognatus Empire and potentially the Galactic Empire of Cyrannus should the Hermitage's reclusiveness ever be broken and such an event as war arise. 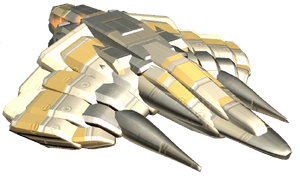 The Vor Sh'Hari class battlecrusier was built from the ground up to be an imposing warship in the field. Armed with numeorus weapons the ship was build with warfare specifically in mind and instances of this class are frequently used as comamnd crusiers by veteren Truthkeepers.

Because this class lacks the fast-tracking laser emitters of smaller classes, the Vor Sh'Shari houses two drone bays and enough space for 20 drones within its large wings. The winged profile of this class was intentionalyl to give it a distinct shape on the battlefield. Being one of the oldest battlecrusier models, the Vor Sh'hari's heritage is reflected in the more luxurious layout of its interiors as it originally served as a command crusier for the most exemplary Truthkeepers in the early days of the Hermitage. As technolgy and manufacturing processes progressed, its significance phased out and higher ranking officials have become more partial to the larger Kar'Shikari class.

The Kar'Shikari class battlecrusier was built to be the spiritual successor of the Vor Sh'hari. It is larger, more advanced, double the drone bay, mroe dominant wings and is fitted with 30% more emitter hardpoints than the Vor Sh'hari as well as a more powerful shield array. it is for these reasons that fleet commanders will use this class as a command vessel.

Like with Vor Sh'Shari variants, the Kar'Shikari was built to display euqal parts elegance and military strength. Because the Hermitage is nto inantely warlike these ships are few-and-far between. Their development was originally spurred by the expanding threat of the Cognatus. During peacetime the presence of a Vor'Shikari vessel can indicate the presence of a ranking Loresage, particularly among senior circles from Fosepist, where many of the Kar'Shikari's in existence are assigned to defend.

Adapted from the designs of older migration ships, the Vor'Orcana was designed a s a purpose-built drone carrier that typically finds itself at the sternguard of most fleets and as a large-scale troop transport. Built into the core of the ship is an advanced AI designed to control the drone fighters, of which the Vor'Orcana is capable of holding a compliment of 2000 drones along with manufactries inside the lower decks to replace lost or damaged drones.

The Vor'Orcana retains several fatures of the old Shil'Kiam migrators, albeit on a smaller scale. Many hanger bays were refurbished from what would have beem biodomes and artificial neighbourhoods.

Based on ancient generation ship designs used by the Tersimian Empire in it's early days of spaceflight, the Shil'Kiam class is a behemoth designed to ferry entire communities though the void. Those still in service are used by the Loreseekers as remote bases and are one of the few classes of ship that frequently have Loresages as captains.

This is because the Shil'Kiam is not a warship. They were intentionalyl designed for deep-space forays perhaps even travel to explore the areas beyond the Hermitage's home cluster. Many in service double as wandering temples and shrines where Loreseekers pay homagee to the Ancent Ones and study information gathered on expeditions.

The Shil'Kiam's chassis is littered with self-contained habitats that can measure between 1,300 to 2,000 metres in diameter and are capable of detaching from the main ship in the event of an emergency. Some habitats are hollowed out and used as massive freighters, often to carry material to build new solar cities in orbit around stars. The massive construction costs mean that although vital to the hermiatage's mission, each oen is immensely valuable.

“Disciplined, orderly and elegant. The Ancient Ones would be proud of our ingenuity I am sure of it!”