Tier 4 (part of the Galactic Empire of Cyrannus)

Similar to technology posessed by the Draconid Imperium

3 Earth Years
The Oligarchy of Praetinna is a breakaway faction of Draconis that were isolated from the Draconid Imperium at the dawn of the Dark Times. Rather than evacuate, most of the population stayed defiantly and were it not for the actions of then-prefect Geleriva Delsacrian the fledgeling power could have been extinguished with all other forign powers within the mid-rim.

The population has since readily acceptted the Galactic Empire of Cyrannus as their new leaders with Galervia as their new mandator.

Originally moderate numbers of Draconis were scattered across the inner-rim worlds after contact was made between the Imperium and the Confederacy of Allied Systems. Merchants and traders came to exchange goods in the final years of the Great Cyrannus War. When the Empire was established the billions stuck in Cyrannus from the mandate gathered together to avoid extermiantion on the outpost of Praetinna.

The Imperium had abandoned them for fear of retaliation from the newly-founded Empire and the population prepared themselves. When the Empire arrived ready to bombard the planet, Geleriva Delsacrian (the system's prefect who had been elected by house Dalsacrian some month prior) Asked for negotiations. She agreed for the colonies to be spared and in exchange they would join the Empire.

Over the next year a radical reform took place. Geleriva declared herself the colony's new head-of-state and representetive after being selected as mandator for the Draconis colonies. Minimal contact remained with the greater Imperium. The newly-founded Oligarchy underwent a severe socioeconomic shift, providing materials and soldiers for the imperial army and overall militarising themselves whilist still retaining key aspects of traditional Imperial culture.

Although small, the Oligarchy is currently one of the largest strongholds for the Following of Drakon's Path, which is still widespread. The population, having grown to propaganda and distrust of the old Imperial Government are cautious and prideful but many old values still remain although the practioners focus less on Drakon as an entity and more on the teachings themselves.

Inhabitants live comfortably, moreso than in the Imperium due to the technology provided by the Empire. Within the first year of the Empire's rule the population became staunchly loyal with a lot of citizens believing that the Empire had similar ideals to the Imperium. Geleriva herself is considered an icon for saving the young colonies and solidifying Draconid presence in the Empire. Although somewhat distrusted, the imperium is still a respected entity within the Oligarchy, even by the Mandator erself.

In contrast to the Imperium, the Oligarchy is primarily run by House Delsacrian. Originally a low-status noble family in the imperium the importance of the new mandator had made them the de-facto interior government. In embracing Imperial ideals they hold little power compared to Mandator Geleriva herself, effectively serving as her subordinates but she is known for using them as advisors. Lesser governors and members of administration are hand-picked by the house's inner-circle who base their choices on loyalty, dedication and merit. As a result Geleriva's level of control over the oligarchy is near-absolute being made up of the people she most greatly trusts and who show the most loyalty to her and the empire. 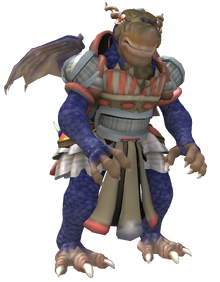 “What I hated about democracy was that it only served as an excuse for arrogant politicians to bicker all day long.”


A young member of House Delscarian, she was elected by her house as prefect of the outpost of Praetinna which served as a direct route to the Imeprium via wormhole. When the colonies were isolated she used initiative and planning to gather what Draconis citizens she could. While at the time numerous citizens asked for her to protect them, she openly declared the colonies would break off from the Imperium and join the empire out of the need for survival.

While her abilities are questionable, she was delighted when she was picked to serve as the local mandator. This solidified her loyalty to the Emperor although she secretly holds some small respect for the Draconid Imperium for getting where it is today. She is vocal in the idea that the public do not always know whst is good for them and that republics are often filled with self-serving idealists who lose their way. Naturally she favoured the empire's heirarchical political structure. Gelervia herself is a shrewd and calm woman, prefering tact over physical fighting on the battlefield and is an idealist believing that it is possible, with dedication and perseverence, to build an empire on words alone. 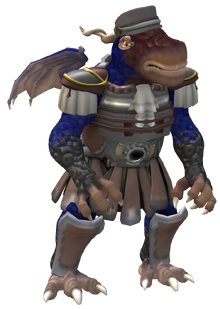 “Order comes though discipline and respect as well as fear. Within the Oligarchy I am a demonstration of that discipline.”


Marshal Derserum Karamus is considered the right-hand of mandator Geleriva. Originally an admiral assigned to secure the trade interests of the Draconid Imperium he effectively took charge of the remaining ITN forces after the Imperium called for a withdrawl following the mandate of Emperor Tyrómairon calling for all outsider powers to evacuate.

He has firm belief in the goals and intentions of Gelariva Delsacrian and under her governance was informally given comamnd over all remaining Imperium forces in Cyrannus. When the Oligarchy was abosrbed int othe Empire he held an informal position as marshal responsible for maintianing the Oligarchy's ability to raise and maintain a defensive force to contribute to the the Empire. Derserum himself however is a reserved man. Who secretly believes that signing over to the empire was a cowardly act. His faith in Geleriva's ability and his dedication to her are the primary reasons he had not fled either to the Imperium or underground.

“While the Senate may not approve of giving away an entire venture to the Empire. Perhaps this state can be used to improve relations between Cyrannus and the Imperium.”

“It does not seem right to leave our kin at the mercy of those imperials without naval support.”

“They made a wise choice.”