The Old Niaka Order was the original empire of the Niaka and the most influential pirate society of the Borealis Galaxy after the Wranploer's empires.

The Niaka Order was founded roughly 14,000 years before the current age. Thanks to the technology of the Cold Relays, the Niaka could advance quickly, just like most other races of the galaxy. At its beginning, the Niaka started a nearly uncontrolled expansion across their space, defeating any resistance with their mecha suits. Eventually, the Niaka and the Wranploer met, and as a way of profiting, the two species allied. During this time, the Niaka Order also began its war with the Seagon Empire, who would be their main enemies for the following years. For the next centuries, the Order's history was of expansion and continuous war of attrition against the Seagon. During the First Borealis Galactic War, the Niaka preferred to not get involved and remained neutral.

The Niaka Order suffered a major blow at the Earth year 2,766, when Chief Xerkea organized a revolution inside the government. Xerkea's loyalists wanted to change the Niaka's ideals and become a lawful empire, causing the Order to be divided into two empires: the old government and new one, known as the Niaka Special Forces. The Niaka pirates were exiled off Special Forces territory and Xerkea took over the Niaka homeworld of Ikkiz. Because of this event, the Order adopted the new name of "Old Order" and ever since seeked the destruction of the traitors who forbid them of their original home.

The Old Order had very minor involvement during the Second Borealis Galactic War. During the Borealis Grox War, the Old Order launched an invasion on Ikkiz right when the planet was about to be attacked by the Borealis Grox Empire. This resulted into a three-way-fight between the Special Forces and their allies, the Old Order and the Grox. After much insistence from the Polar Crystal Alliance, the Niaka empires decided to join forces and worked together to push the Grox off their homeworld. The Old Order would later be one of the many empires present during the Symphony of Flesh and Steel, where they helped push into Grox territory to eliminate them permanently.

By the fifth year of the Ice Age, the Old Order began falling into disarray due to Captain Lord Xoraika's incompetence and greed. Citizens of the empire began fleeting to the Polar Crystal Alliance looking for better life conditions. The Old Order would eventually hire the services of Zoltik Relkhul and Soltako Armed Military to create a scheme called Operation New Order, which involved kidnapping races across the galaxy, brainwashing them into obedient soldiers and then using them as an army against the Niaka Special Forces. The plan almost succeeded until it was foiled by Xerkea and Commandant Asraels of the Zoles Imperium. Captain Lord Xoraika was killed in action and the Old Order was then attacked by both the Special Forces and the Zoles, who deemed the attack on Ikkiz as an act of war against the Polar Crystal Alliance.

The Old Order was defeated and surrendered to the Alliance, ceasing to exist and its inhabitants being unified under Xerkea's rule. Some Niaka pirates escaped, refusing to join the Special Forces and either became independent or joined Wranploer remnants such as the New Wranploer Legion or the Oltauris Consortium.

As a nation evolved around the concept of piracy, the Old Order was an empire ruled by criminals and did not have an equivalent of a police. Leaders were chosen via the assassination of the former. According to their culture, if a Niaka was weak enough to be assassinated, then he did not deserve to rule the Old Order. The Old Order was notably much spiritualist than the Special Forces, believing their homeworld of Ikkiz had sacred attributes and as such, should not be harmed by warfare. It was noted that in all invasions on Ikkiz, the Old Order never attempted to attack the landscape, only concentrating on the Special Forces' spaceships.

The Old Order's settlements were usually poor-looking, as the lack of an orderly force inside the empire caused the Niaka to expand through their planets with no control. Crime was rampant across their cities to the point every Niaka was considered a criminal by default. However, those Niaka with more wealth could live in much better conditions, often in far away colonies so they did not have to live among the poor themselves. 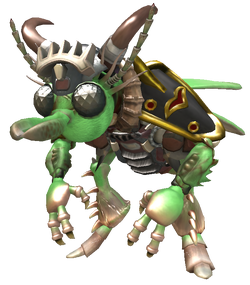 “I'm not allowing that Xerkea runt to run our species into the ground.”

Captain Lord Xoraika was the final ruler of the Old Niaka Order, taking the power after assassinating the previous ruler. A very proud follower of the Old Order's ideals, he was determinated to end the Special Forces, and was ashamed that it was ruled by a member of his own family. Xoraika was short tempered and was prone to bursts of anger, a trait which appeared to be common on his family. He had much disdain against the Polar Crystal Alliance and saw the Wranploer as an old, fallen race who needed to be replaced. As all other Order Niaka, Xoraika had a deep hatred toward the Seagon people.

Xoraika orchestrated the events of Operation New Order and eventually attacked Ikkiz himself, where he fought and was killed by Xerkea after having his suit fall on top of him, crushing him under its weight.

“You have the privilege of being in our presence. Enjoy it while it lasts.”

“What the heck do you want?”

“Surrender already. I've got half of a galaxy on my side now.”

“Distateful insects. You are not a threat, you are but a nuisance.”

“For the prosperity of the Niaka people, the Old Order must fall.”

“Turning on me, ain't you? I've always said, I do not tolerate traitors.”

“You stand as a force to oppose the Polar Crystal Alliance. This is nothing but good for our aims as of now. We shall be watching. Argh. Matey.”

“You are greedy and selfish. We like that. Just don't steal our stuff.”

“There's a hu-u-u-uge bounty on your leader's head, do you know that? Yarrr!”