“I have seen them! They are monumental in form, as perfect as one could imagine, and they were quick to point that out about themselves. Yet, despite their pride, they would throw themselves into the maws of darkness to purge it from existence, even if meant being torn asunder in the process. Despite their vanity, their hearts are pure, and the universe is a better place with their guidance.”

The Obvia'Atra, also known by the name Ravenrii, were a race of beings who served as the Essentials associated with Celestial Energy. Self-proclaimed defenders of the omniverse, much of their existence was based on combating the forces of the Samut'angar and the servants of the Xhodocto, believing them to be a blight on reality which could not be allowed to exist, while occasionally communing with mortals for various reasons, often to give them guidance when they most needed it. A mortal realm under their control, known as the Federation of the Core Worlds, was among the most influential inhabitants of the late Tigris Galaxy in the Onuris Universe.

The Obvia'Atra were utterly dedicated to the eradication of what they believed was evil or wrong, though they were not unreasonable - they chased down Essentials associated with darkness, but rarely went out of their way to attack mortalkind. In fact, those who had contact with the entities described them as honourable, knightly paragons who saw mortal life as their greatest treasure; a treasure which required their utmost attention and protection. The Obvia'Atra and all related to them were eventually exterminated by the Xhodocto during the Third Xhodocto War, bringing an end to their constant vigil against the darkness.

The Obvia'Atra are creations of the godform known as Kkia'Sihm, hailing from the Plane of Existence known as Illum Alta (most known as Heaven by mortals) to serve as her loyal subjects. Upon being confronted by the reality of Chaos, the Obvia'Atra declared war upon the followers of the Xhodocto, leading to a virtually eternal war being waged across existence as the servants of Kkia'Sihm declared they would see every one of them destroyed. Despite their open defiance, the Xhodocto are not known to have directly intervened in the Obvia'Atra's actions; it is believed their constant war against the Samut'angar served as an amusement for Angazhar.

Since time immemorial, the Obvia'Atra acted together with the Thoi'olerthae of the Realm of Dreams, with the two races becoming akin to angels in the eyes of mortals. They would also grow close to the Vyro'Narza following their ascension into godhood, as they too were sympathetic to the lives of mortals. This came to play during the War of the Ancients, when the Obvia'Atra joined forces with the Vyro'Narza against the Zhulultu, ultimately leading to the foundation of the Federation of the Core Worlds at the Tigris Galaxy; an empire of mortal followers of the Obvia'Atra, who would be placed there primarily to aid in the development of the Krass when the time was right. The Federation of the Core Worlds would become an influential member of the galactic community, being responsible for the foundation of organizations such as the Universal Alliance of Nations and the Universal Trading Union.

During the War of Ages, the Federation of the Core Worlds pledged itself to the Seven Starr Alliance and fought the Congregation, though the Tigris War ultimately ended with the destruction of the Tigris Galaxy, taking the Federation with it. While remnants managed to flee at the time, they were wiped out during the Annihilation years later. The Obvia'Atra themselves were finally wiped out entirely during the Third Xhodocto War, likely due to Angazhar having had enough of their defiance; the Xhodocto tore Illum Alta apart, vanquishing the Obvia'Atra and causing their associated Celestial Essence to cease existing entirely.

The Obvia'Atra were formidable creatures composed of Celestial Essence, who stood at an average of four meters in height and weight roughly five hundred kilograms. They were divided between males and females, with both being adorned with great horns and spikes across their bodies which gave a faint resemblance to armor. Obvia'Atra were naturally muscular and imposing in appearance, though were not particular distinct among one another; most males and females were identical in physical terms due to a belief there was nothing to change or improve in their physical forms.

The Obvia'Atra embodied order and altruism in their most proactive forms; unlike their Thoi'olerthae siblings, whose compassion for mortals largely took an indirect approach, the Obvia'Atra believed physically acting against darkness was the best way to ensure the continuity of existence. They were often described as caring and reasonable beings, willing to defend mortals and other Essentials from supernatural threats to the very end of their existences, though they were also known for being extremely vain; the Obvia'Atra, while not believing themselves inherently superior to their allies, were convinced they were the most physically perfect beings in reality, in worst cases leading them to be among the most stubborn Essentials.

Being composed of Celestial Energies, the Obvia'Atra possessed mastery over it and used it in their daily basis. They were perpetually enveloped in auras of radiant light which soothed mortals and burned demonic beings with their very presence, and they were proficient in using their essence to create structures and objects; from weapons to entire cities. Most meetings between Obvia'Atra and mortals happened when the Essentials were shapeshifted into seemingly mundane forms - they were able to reshape their bodies as they pleased, often taking the form of beautiful, physically fit angels or knights. Obvia'Atra were not anchored to their home realm and could be permanently destroyed in the mortal universe, though it was an exceptionally difficult task to achieve as they were virtually impervious to conventional weaponry. 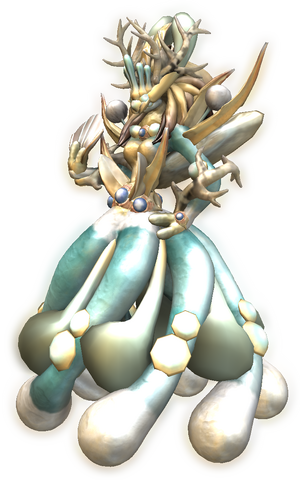 “Fear not. My design exists only to perpetuate the perfection that is the light.”

Kkia'Sihm was the godform who created the Obvia'Atra in her image, and the ruler of the realm of Illum Alta. She was known as "Imperatrix" by both the Ravenrii and the inhabitants of the Federation of the Core Worlds, using a mortal avatar to serve as the queen of her mortal servants during their existence. Opulent and beautiful beyond mortal understanding, Kkia'Sihm believed the Xhodocto to be akin to a cancer in reality, and as such dedicated her life to opposing them. As the greatest being in Illum Alta, she had powers akin to a divinity, making even her greatest Obvia'Atra knights appear like children in comparison. She was ultimately destroyed by Angazhar alongside her creations, allegedly fighting back against the coming tide of destruction even when she realized her time had finally come to an end.

“We are no stranger to the idea of things coming to an end. But the Obvia'Atra's end was unexpected, and was premature. They will be missed.”

“They undermine our order, and disturb the balance. Therefore, they had to meet an end.”

“Now that they're gone, I feel they were better than I gave them any credit for. Or maybe I'm just confused. Still, never nice to lose allies.”

“Pride is but the weakest devices on the field of war; flesh and soul burn and scatter - pride rendered inert. The ophidian pull of resolution and fate was the most artful of demises; devoured by an unending maw.”

“The false angels' misguided faith has blinded them. There can be no chosen race for mortals to place their faith into, to worship them as if they were gods, no - only the absolute that is Spode is worthy of reverence, and only we can save ourselves.”

“For millenia, that was an ideal we aspired towards. Now that they are gone, that only means someone has to fill the vacuum.”

Retrieved from "https://spore.fandom.com/wiki/Fiction:Obvia%27Atra?oldid=765807"
Community content is available under CC-BY-SA unless otherwise noted.