Being 41.3% of the Nivenian Economy

The board of directors resides in the Departmental District of Nivenia Prime, and most of the company's operations take place within the Nivenia system. However, there are expeditions heading toward Thadus 0037, the Caeruleo system, and the Paulo Fluctus Beta system, and the Megastructural Construction Corporation makes trade deals with empires across the Gigaquadrant.

Interestingly, since 170 BNE the Megastructural Construction Corporation has constantly benefited from legislative and judicial decisions from the Nivenian government. While many suspect conspiracy, there has never been any proof of these accusations.

The advertising department of the Megastructural Construction Corporation has long operated under the delusion that the most capital letters, exclamation points, and trademark symbols they slap onto a product name, the better. While most Nivenians are actually stupid enough that this might work, they typically forget that they deal with shipments of not credits, but teracredits, and thus the custodians of these large sums of money probably are not stupid (after all, a fool and his money are soon parted).

To give an example of this, it is advisable to look at how the name of the Exawatt photon generator changed to the Ultimate Terraforming Lightbulb 1.0™, and hw its sister products somehow morphed into all-caps when the advertising department got their hands on the product naming. If there is any good thing about the advertising department of the Megastructural Construction Corporation, it is that at least they do not directly try to entirely fill your life with ads. They instead make sure that others can display their advertisements on the Ultimate Terraforming Lightbulb 1.0™ and similar products.

In general, the Megastructural Construction Corporation is supportive of other corporations, at least when they are not competing, either for customers or for the bigger cut of the profit on a supply chain. The Megastructural Construction Corporation usually could not care less about random people by themselves, though they do care about large numbers of people voicing complaints, or important people voicing complaints; either of those looks bad for the company. All in all, while the Megastructural Construction Corporation maximizes profit at all costs, their needs align very closely with the needs of the people. As they are a construction corporation, their products could not be sold unless there is a sufficient market for massive engineering projects that make even enormous planets look like dust grains. The only way this can happen is with a peacefully and quickly expanding, extremely large population of not-impoverished people. To accomplish this, they lobby and bribe for governmental policies that promote this situation. As they have been doing this for centuries, it has pretty much come true at this point, and "a peacefully and quickly expanding, extremely large population of not-impoverished people" is a petty good description of the Nivenian Empire.

Another requirement for their continued success which they lobby for is an extremely capitalistic economy with minimal regulation and taxes. As this view (and the view mentioned above) align very well with the Nivenians in power almost all of the time, this is generally what ends up happening. They are thus pro-corporation and anti-regulation, yet anti-war more than both, as wars heavily disrupt business most of the time. While they do not generally fight physical battles to get what they want, they hold a lot of sway in the Nivenian legal system and have large amounts of favors to collect from various people, in addition to a massive army of trillions of lawyers. In the Nivenian Empire, their legal department is an almost unstoppable legal entity.

The Megastructural Construction Corporation is highly renowned for its invention of the Ringworld in 445 BNE, and its construction of ever-larger structures since. The Megastructural Construction Corporation is largely considered responsible for the current extremely high population capacity of the Nivenian Empire. Another accomplishment worth noting was the DIY Ecumenopolis product line - products used on planets to transform them into ecumenopolises quickly and easily. Several sales have been made to alien empires, and the product line is enjoying a resounding success.

The Megastructural Construction Corporation was the first entity in Nivenian History to completely disassemble a planet (shown below). Using the full power of a Nicoll-Dyson beam built around the Caeruleo System, they vaporized three carbon-rich ice giants in late 29 NE, using the resources as construction material for new ringworlds and as chemical feedstock for the production of plastics and habitats. The actual material extraction took roughly a hundred trillion workers the duration of the planetary evaporation procedures to accomplish using massive electromagnetic scoops, and the inhabited moons were protected from the plasma waves by installing massive reflective and heat-resistant panels between them and the planets that they were orbiting. 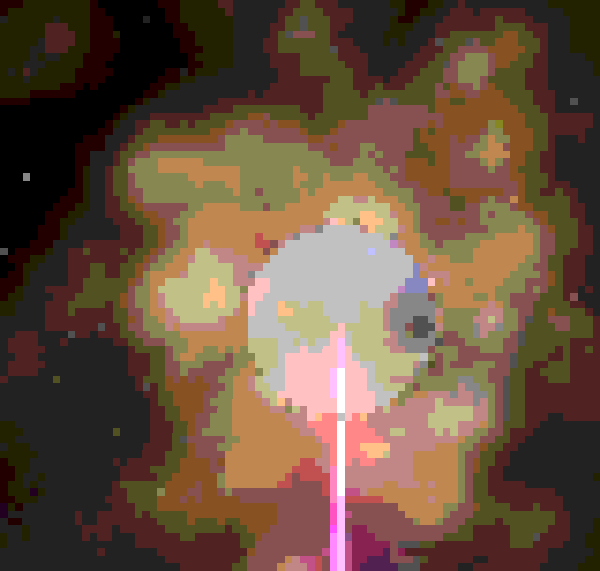 The Megastructural Construction Corporation has had over a decade of experience with various methods of reducing Andasium (VIII) Oxide to Andasium metal. This process started with the construction of Andasium Reductor One, a quaint operation (by today's standards, at least), and was slowly scaled up until the current near-Kardashev-2 megastructure operating on beamed energy from the Caeruleo System to synthesize andasium for both the Nivenian Empire and the Gigaquadrant at large - Andasium Reductor Four.

Andasium Reductor One was constructed at the end of Neochios, 22 NE. While it could only synthesize a hundred million metric tons of andasium per day, it was the original electrolysis machine that proved the commercial viability of the project. Adasium Reductor Two, the next version, was constructed between Dekemurios and Neochios of 23 NE, and further proved the commercial viability of very large-scale andasium synthesis, as it was the first andasium reducing plant built in zero gravity - Andasium Reductor One was simply a large industrial facility on Nivenia Prime, while Andasium Reductor Two was a facility constructed out of a small moon of Nivenia Secondus, the resulting station a full nine hundred kilometers in radius. The next step on the gradual ladder of improvement was Andasium Reductor Three, built between Martex and Novemex of 25 NE, which was the first actual megastructure in the sequence. This megastructure was essentially pushing the limits of what could be done with the technology of the time, as it took the form of a torus wrapping around the primary of the Nivenia System at a radius of ten million kilometers, and was able to manufacture half a quadrillion metric tons of andasium per day, having to employ 75 trillion workers. By this point the gigaquadrant at large was beginning to notice Nivenian andasium synthesis, something that the Nivenian Empire was uniquely suited to accomplish, given the dependence on not just energy, but cheap labour for profitable andasium synthesis.

However, Andasium Reductor Four was superior to its predecessors on all fronts. With the construction of Andaisum Reductor Three, the andasium synthesis industry was already employing nearly a hundred trillion Nivenians, but with the advent of petaflux adnasium synthesis techniques in Novemex, 31 NE, andasium could be manufactured at much larger scales - stellar scales. Andasium Reductor Four was designed to product a massive 720 quadrillion metric tons of andasium per day, something that would finally put Nivenian andasium synthesis on par with the mining and extraction techniques of other gigaquadrantic nations.

Construction of Andasium Reductor Four took place between Novemex, 31 NE and Novemex 38 NE - when the structure was completed, at the barycenter of the Nivenia System, it employed seventeen quadrillion nivenians (who worked on an eight-month work cycle, so as to allow them to return to their families for four months out of the year, and reduce the load on the necessity of support infrastructure.), and began to fuel a slow, but steadily progressing urbanization of a location that used to be in the middle of nowhere.

In general, the Megastructural Construction Corporation will sell almost anything, as long as it is either large or bought in bulk. Typically, their main products are habitats with hundred to hundreds of thousands of times the surface area of a typical planet, to the point where the unit of measurement for surface area becomes the "kiloEarth" - a thousand times earth's area. Some of their more successful products, most innovating products, and largest products are shown below: