“There is only one rule within the Nijusi Syndicate; Nijusi is king. You would be surprised as to what goes on in there; the media presence paints a rosy picture of the matter. Unravelling all of the layers reveals a gold-coloured dystopia. Tuuros' crime - violence, drugs, arms and all else in between is the commodity of the Nijusi Syndicate. Of course no one is going to debate that - those that speak out against the Nijusi Syndicate amazingly tend to go missing.”

Historically, the territories of the Nijusi Syndicate were once part of the Sumikian Commerce Nexus; under an economic bid to move much of their economic activity to the safer zone of the Tuuros Galaxy and away from the proximity of the Vranntan Order and The Schism, based in the Imi-Xal Sector. The territorial expanse of the Xittan-Yaton Sector was mostly funded through trade and commerce with the Asilaphean Empire and Nanusuloan Convocation. As the economic activity began to stagnate in the Imi-Xal Sector, Tuk Nijusi, at the time a piratical overlord, signed private deals with the Vranntan Order - notorious for their piracy and violent regime across the Pal-Tal Sector - to supply them with further advanced military hardware in exchange to forcibly split the Xittan-Yaton Sector territories and place Nijusi in power.

Agreeing to the terms, the Vranntan Order had remained in the Xittan-Yaton Sector for approximately two years - huge numbers of their forces laid in uninhabited territory awaiting for their numbers to amass to the point where the Order and Nijusi's secret company of Sumikians loyal to him had a strategic advantage. Invading the planet of Sumarec - the Xittan-Yaton capital, Nijusi and the Vranntan, hundreds of thousands in number laid siege to Sumarec. As it was not predicted due to Nijusi creating convoluted loopholes to avoid detection, Sumarec was unprepared and thus the siege had only lasted a month. It was among the bloodiest conflicts in the Tuuros Galaxy's history that did not involve The Congregation, and as much as four million were killed over the month's span. Nijusi secured a victory however by exterminating the directorate on Sumarec, and it was over the months after that the rest of the Sector's territory became part of Nijusi's new syndicate. Sumarec was later renamed Nijusisumarec, after the new President himself.

The Nijusi Syndicate however was not met with a positive response however; Nijusi inherited a strong economy and in turn instantly made enemies with the Sumikian Commerce Nexus, which was left with their wealth halved in the incident. The Nanusuloan Convocation and Asilaphean Empire immediately condemned Nijusi's actions, although Nijusi had worked to quell the fiery response of his coup as he had set up lucrative trade deals with the Convocation and the Empire. Such deals were so productive that neither could afford to sever their ties with Nijusi - this had strained their relations with the Sumikian Commerce Nexus, and the years after were mainly a power struggle between the Commerce Nexus and the Nijusi Syndicate. The Vranntan Order as well had began to alter their deals with the Nijusi Syndicate; something that Nijusi himself disliked intensely. Nijusi had manipulated the politics of the Order and had the War Arbiter at the time 'removed' from power - which caused the Vranntan to instate a new War Arbiter who would continue a line of War Arbiters that entered more stable economic participation with the Syndicate.

In present times, the Nijusi Syndicate remains as arguably the most powerful and terrifying force in the Tuuros Galaxy, with Nijusi having established his own civilisation over the course of a thousand years. Appearing much like an immortal dictator, something taken in the Tuuros Galaxy with much fear, Nijusi has distanced himself from the underhanded motives of the Nijusi Syndicate and has entered more legitimate means of trade to mask the illegality of the Syndicate even further. His trade deals, forced or not extend throughout almost all of the Tuuros Galaxy, including the Sumikian Commerce Nexus. Nijusi himself has also established multiple mediums of more democratic participation with the Galaxy - having started the Tuuros Galaxy Theater Festival after the dissolution of The Congregation in 2766. The first of many that would later contact the rest of the First Gigaquadrant, Nijusi would alter the terms of the Theater Festival for its fiftieth anniversary and extended his invitation towards the entire Gigaquadrant to participate, with others warning the Gigaquadrant of the immense power of the Sumikian.

Despite the frequent attestation that the Nijusi Syndicate adheres to corporatism, in which the Syndicate is in fact devolved into multiple subsidiary factions which have influence off-capital, much of the Syndicate is in fact headed by a board that Tuk Nijusi appoints personally. They function in similar parameters to ministers of a more 'official' government, as they administrate different sectors of the Syndicate's welfare as well as economy. However, the Nijusi Syndicate does not possess a foreign minister nor does it have a significant foreign policy much like the Sumikian Commerce Nexus; whilst they remain politically neutral to the Tuuros Galaxy, the Nijusi Syndicate tends to have even less dealings in the foreign sector than the Commerce Nexus does.

Although the board of directors are in fact shareholders of the Syndicate, and their personal wealth reflects that, Tuk Nijusi remains the majority shareholder of the Nijusi Syndicate, controlling 68% of all shares. Nijusi himself rarely takes control of the Syndicate's activity in modern times, and merely sits in on board meetings to overhear the discussions of his subordinates. In the occasion that Nijusi does wish to undertake an executive role, his board often tends to waiver their authority in his presence on the account that Nijusi's authority has an extreme degree of enforcement. 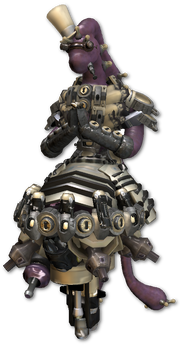 President Tuk Nijusi is the first and current President of the Nijusi Syndicate. Having overseen the administration of the Nijusi Syndicate since its formation, Tuk Nijusi's control of the Syndicate has seen multiple levels of criminal activity - illegal arms trade, illegal drugs trade, unsanctioned commerce of materials, embezzlement, among countless other things that may deem him a vehemently corrupt dictator. Having signed more legitimate deals over the years, Nijusi's reputation has softened, although there are still many that call him out for his criminality and his dealings with the Vranntan Order.

Nijusi's main profit is supplying multiple factions across the Tuuros Galaxy to further advance their war machine; whilst this has been most lucrative with the Vranntan Order, many smaller factions in between who have been in conflict for over a millennium have been supplied with Nijusi's goods and hardware.

“It is only a matter of time.”