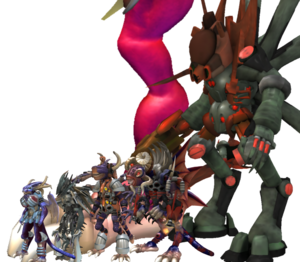 “Where you perish, the Legion grows. In our grip, all of Warlord Torrent's enemies will burn and make way for his new juggernaut!”

Dark Grip was the name given to a special operations team of the New Wranploer Legion, composed of individuals hand-picked by Torrent himself to acted as his personal enforces and highest ranking lieutenants.

Dark Grip was created shortly after the founding of the New Wranploer Legion in the first year of the Ice Age. Worried about dangerous teams of enemies around the galaxy, like the Penumbra Unit, UNOC and Da Rogue Leedas, Torrent decided to organize his own team of super-powerful soldier to obey his commands. The first member of the squad was the Elder Levarcor Brakarion Gragon, followed by the maniacal arsonist Kravh Helljaw. Torrent would then uplift a Sankáryn who named itself T'enth-ei, and later encounter the Borealis Zazane assassin Dolgan Tuchaki, the Niaka Xegriek and the Zoles insurrectionist Chahenthras.

Dark Grip served as Torrent's main mean of controlling the New Wranploer Legion as well as fighting the Penumbra Unit, serving as a substitute for the Guild of Shadows though the latter were involved in training Dark Grip to some extent. Each member of the squad was granted access to a lesser version of Torrent's skin-hardening nanomachines which gave them all the ability of greatly increasing their strength and resilience. Dark Grip antagonized Vekaron and his team in specific for several years starting for their first encounter during the fourth year of the Ice Age, though with time, the team began to suffer due to Torrent's gradual loss of rationality. During the seventh year, Dark Grip began falling apart after Xegriek was arrested, Dolgan Tuchaki betrayed the unit and joined Vekaron and T'enth-ei, Chahenthras and Brakarion Gragon were killed in combat one by one. Dark Grip officially came to an end following the death of Kravh Helljaw, who was the last survivor of the squad.

Dark Grip was a team composed of individuals who were fully loyal to Torrent and followed all of his commands without questions. They were considered above the rest of the New Legion military, only listening to Torrent's orders and having the right to ignore everyone else. To show off their power, Dark Grip made no effort in being silent about their operations unless explicitly ordered to. Dark Grip usually worked as a team unless the task required members to work separate from each other.

All members of Dark Grip were equipped with the best equipment the black market could get, each customized to fill the necessities of the member in question. In addition, all members of Dark Grip had a lesser version of Torrent's skin-hardening nanomachines, making them incredibly tough and giving them immense physical strength. However, Dark Grip's nanomachines were overall less efficient than Torrent's and not all members had the ability to read enemy movements. These were countermeasures made by Torrent in case any member of Dark Grip attempted to rebel against him.

Dark Grip were Torrent's personal servant and lieutenants. Their was is to destroy whatever opposition remained on the Warlord's path and lead the forces of the New Legion into war. 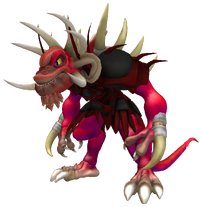 “Come at me, Alliance. I will stomp you all under my feet in the name of the Warlord!”

Brakarion Gragon was an Elder Levarcor who served as the internal leader of Dark Grip. Formerly a captain of the Borealis Consortium Network, Brakarion was found by Torrent and offered a position of power for his battle and leadership skills. Tremendous large, at 25 meters in height, Brakarion was the largest Levarcor ever recorded. It was implied that he was the result of a discontinued experiment of creating an army of titanic-sized Levarcor by the old Wranploer Legion which failed for unknown reasons. Strong and intelligent, Brakarion lead Dark Grip with fervent loyalty toward the Warlord who made him possibly the most powerful Levarcor of all time. 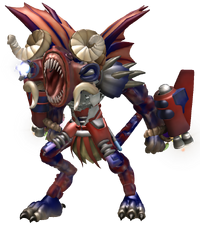 Kravh Helljaw was a psychotic Varkorus who served as the main assault force on Dark Grip. Unlike the rest of the team, Kravh was never officially a soldier and was instead a serial killer well known for causing chaos and arsoning on his path. He was eventually contacted by Torrent, who convinced him to join his cause in enchange of freedom to burn and destroy everything he wanted. Through a series of cybernetic implants and mechanisms, Kravh could launch explosive fireballs as well as set himself completely on fire. He fully experienced the pain of being burned, but did nothing about it, for it was a pain he loved. 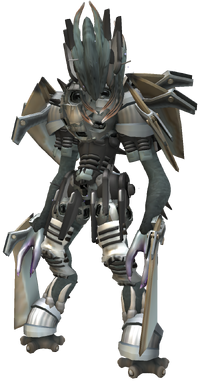 T'enth-ei was a Sankáryn who served as another lieutenant of Dark Grip. Formerly a scout of the old Wranploer Legion and Consortium Network, T'enth-ei was chosen by Torrent for the need of an agile agent and for T'enth-ei's positive combat experience. Equipped with several mechanical implants on his legs, T'enth-ei was capable of running at the speed of average 460 m/s, with his highest recorded speed being 820 m/s. was is equipped with special head implants which negated his species' common weakness toward loud sounds and also possessed several plasma shooters mounted on his shoulders. He could attack his enemies by using a pair of large vibroblades or by outright ramming into them at high speed. T'enth-ei displayed an undying hatred for all Zí-Jittorám and wished for nothing but to slaughter them all for their mistreating of his race. 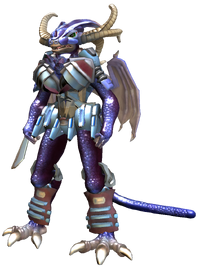 “The one deemed "fragile sex" will break your bones into pieces and splash your entrails across the wall.”

Dolgan Tuchaki was a Borealis Zazane who served as another lieutenant of Dark Grip. One of the few Borealis Zazane still involved with Borealis crime, Dolgan was chosen by Torrent to be a member of Dark Grip due to her exceptional skills. Personality-wise, calling her a tomboy was an understatement. She was considered overly masculine in attitude, always partaking in "manly" actions and had a distaste toward "others' desire to pass their seeds". She was equipped with a special sniper rifle-coilgun hybrid that fired powerful antimatter-fueled bullets that caused extreme collateral damage to her enemies. Additionally, she was equipped with camouflage equipment which allowed her to become invisible to the naked eye, so she could approach and backstab her enemies. 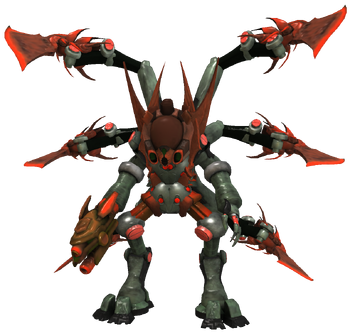 “We carve our way to create a true new order! Torrent's order!”

Xegriek was a Niaka who served as another lieutenant of Dark Grip. Formerly a member of the Old Niaka Order, he had the lower half of his body destroyed in a battle against the Niaka Special Forces and replaced with multiple robotic appendages. He joined the New Wranploer Legion sometime after the Second War, where he was chosen as a member of Dark Grip for his fame across the Arm of Wildness. Xegriek fought by using a special, tremendously powerful mecha suit created from the best parts the black market had to offer, and he believed serving under Torrent would bring Borealis to a new age where there were no more rulers to be followed and no more oppressive empires like the Special Forces to stand on his way. 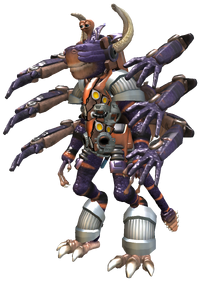 Chahenthras was a Zoles who served as another lieutenant of Dark Grip. Born and raised within an exiled clan of Zoles traitors, Chahenthras was the last of her kind after she had witnessed the merciless execution of her family in her younger days. Chahenthras was regarded as an expert in terms of her engineering feats and intelligence-gathering skills, often used as a means to gather information for Torrent rather than fight on the frontlines, and fought using multiple cybernetic limbs that stemmed from her back alongside a multi-bladed polearm when she was exposed in the open. She was not afraid to manipulate and deceive enemies when necessary and enjoyed watching her enemies, specifically Zoles of the Imperium, suffer - in contrast, she desired a liberated galaxy, free of empires where people were allowed to live as they pleased as long as they were willing to fight and die for it. Due to her nature as a Zoles she was often abused by Torrent and others, and was commonly regarded as the weakest of Dark Grip's lieutenants.

“Try all you want, Torrent. Get the best soldiers you can. We will kill every one of them, and you!”

“OUR WARBOSSES IS BETTA”

“Look at those copycats. They think they can even compare to me and my siblings? They are as sorely mistaken as they are inferior. And besides, it's like looking at a cat-walk of ugly.”

“As a Penumbran, I find this attempt at replicating our prowess disrespectful... I hope they didn't hear that.”

“Are you people trying to knock-off the Wraith Legion? That is quite an entertaining prospect I must say.”

Retrieved from "https://spore.fandom.com/wiki/Fiction:New_Wranploer_Legion/Dark_Grip?oldid=613558"
Community content is available under CC-BY-SA unless otherwise noted.