Military of the Cyrannian Republic

To protect and serve the New Republic, its people, the constitution and its allies.

“Our imperative is to protect our citizens, not to wage war. We attack only as a last resort.”

Behind the Naval and Ground forces of the military lies the New Republic Intelligence Service (NRIS), which is responsible for the gathering of information regarding potential threats to the Republic, whether they be from a single individual, a foreign government or a far-away conflict. Though not as pervasive as its Imperial counterpart, Republic Intelligence is nonetheless a force to be feared. Officially overseen by the Republic Senate, NRIS is also responsible for carrying out covert operations both within Republic territory and outside it. For these reasons, Republic Intelligence, while by no means a secret organisation, tends to remain out of the spotlight lest the citizenry begin asking questions they may not like the answers to.

The military of the New Republic was formed soon after the creation of the government and was in many cases a merger of various already existing groups such as the militaries of the Republic in Exile and the various other remnants of the United Republic of Cyrannus that were disunited after the creation of the Galactic Empire of Cyrannus at the conclusion of the Great Cyrannus War. Though initially centred on Apatalore in the Quadrant Galaxies, the Military soon moved its headquarters to Mou'Cyran after it was established. From the massive military complex in the middle of the Ionian Ocean, Republic Command soon established a more definitive hold over the three main arms of the Republic Military including the Navy, Army and Intelligence service. Initially, the Republic used almost exclusively old United Republic of Cyrannus weaponry and machinery though they quickly designed starships, vehicles and weaponry updated to modern Cyrannian standards, primarily to compete with the Empire should war ever come to the Republic's lands.

As the Republic expanded into the Coru Secundus region of the Cyrannus Galaxy, so do did its list of potential adversaries. As well a facing off against the occasional Neraida incursion, the Republic faced a more immediate threat in the form of the Rihanae Pact, an organisation consisting of the Jenassian Regency and the Regellis Star Empire. Though these battles would primarily be naval in nature, such as an important battle over Mou'Cyran itself, the Republic would face its first large land engagement on the new Ermitant homeworld of Venetia alongside many of its allies both within the Mou'Cyran Accords and outside it, including the Brood of War, Algolurn Popular Republic, Indoctrinate Collective, Naakjian Confederation, Delpha Coalition of Planets and Rambo Nation.

The Republic Army is the main land based force of the New Republic as well as the second largest branch of the Republic Military after the Naval forces. Due to the emphasis that the Republic places on space combat, the Army functions primarily to defend Republic worlds against the threat of attack by a foreign power though it also serves alongside the Navy during planetary invasions or liberations, most famously during the Great Battle of Venetia, when the Republic Army fought alongside the Indoctrinate Collective, the Brood of War and others to liberate the world from the Bisistar Domain. Though ultimately reporting to the overarching Republic Command and serving at the will of the Senate, the Army is led by General of the Army Anqual Gahan, a Mon Nahdar with a noted hatred for the Galactic Empire of Cyrannus. In the early years of the Republic's existence, the Army retained equipment mainly stemming from the United Republic of Cyrannus though it later invested in more advanced designs for both its soldiers and vehicles.

Main article: Fiction:New Cyrannian Republic/Navy
The New Republic Navy is the primary military and exploratory body of the New Republic. The main purpose of the fleet is to provide defense for the Republic against alien threats, to explore the cosmos, to engage in diplomatic relations with new, undiscovered species and to wage war should worse come to worst. The navy is led by Republic Command, a group of high ranking officers chosen by both the President and the Senate. When the New Republic was initially formed, it made extensive use of the Venator-class Star Destroyer, which had proved its worth time and time again since the days of the Intergalactic War. Though no plans exist to remove the Venator-class from active service, plans for more powerful Star Destroyers to serve alongside it resulted in the development of the Phoebus-class Star Destroyer. As well as Star Destroyers, the Republic also fields science and exploration vessels such as the Nova-class, which were developed in tandem with Rambo Nation. These vessels are at the forefront of scientific investigation in the New Republic.

An enigmatic and somewhat shadowy organisation, the New Republic Intelligence Service is the largest and most important intelligence agency acting in the name of the New Republic. Officially overseen by the Senate, in truth NRIS is a primarily independent organisation which only ostensibly acts under the supervision of the civilian assembly. Though not as pervasive as its Imperial counterpart, Republic Intelligence is nonetheless a force to be feared. NRIS is also responsible for carrying out covert operations both within Republic territory and outside it. For these reasons, Republic Intelligence, while by no means a secret organisation, tends to remain out of the spotlight lest the citizenry begin asking questions they may not like the answers to.

Navy: Fleet Admiral Willelmus Cretacea is a highly regarded officer serving aboard the Republica, flagship of the Republic fleet. The father of Apollo, Cretacea has fought in conflicts including the Trucinex War and the Great Cyrannus War.

Army: General of the Army Anqual Gahan is a passionate and intelligent officer fiercely proud of the troops that fight under the banner of the Republic. A Mon Nahdar who knows the full extent of the Empire's capacity for cruelty, his hatred for the hyperpower is no secret. 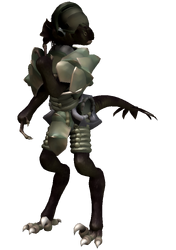 Intelligence: Director Aev Tempaere is just as enigmatic as the agency he leads. His devotion to the Republic fringes on zealousness, solely driven by a desire to advance his career and protecting Republic citizens from threats from within or without.

“A dutiful organisation formed to safeguard the interests of the Republic and her citizens.” 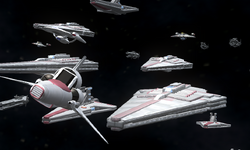 Retrieved from "https://spore.fandom.com/wiki/Fiction:New_Cyrannian_Republic/Military?oldid=790417"
Community content is available under CC-BY-SA unless otherwise noted.