“We fight for the Republic - to victory or death.”

The Republic Army is the main land based force of the New Republic of Cyrannus as well as the second largest branch of the Republic Military after the Navy. Due to the emphasis that the Republic places on space combat, the Army functions primarily to defend Republic worlds against the threat of attack by a foreign power though it also serves alongside the Navy during planetary invasions or liberations, most famously during the Great Battle of Venetia, when the Republic Army fought alongside the Indoctrinate Collective, the Brood of War and others to liberate the world from the Bisistar Domain.

Though ultimately reporting to the overarching Republic Command and serving at the will of the Senate, the Army is led by a Supreme General of the Army, a rank currently held by Anqual Gahan, a Mon Nahdar with a noted hatred for the Galactic Empire of Cyrannus. In the early years of the Republic's existence, the Army retained equipment mainly stemming from the United Republic of Cyrannus though it later invested in more advanced designs for both its soldiers and vehicles.

As with the other branches of the Republic Military, the army was created soon after the formation of the New Republic in 03 NE. Initially headquartered on Apatalore in the Quadrant Galaxies, army headquarters was later moved to the new capital of Mou'Cyran in the Coru Secundus region of the Cyrannus Galaxy, specifically on a large island in the planet's Ionian Ocean. Soon after the establishment of the Republic, the New Cyrandia Wars erupted in several regions of the galaxy necessitating a military buildup sanctioned by President Apaltar and the Republic Senate, this led to new weapon and vehicle designs being developed to replace those in use since the days of the United Republic of Cyrannus, an initiative largely helmed by the newly promoted Supreme General of the Army Anqual Gahan.

Throughout the New Cyrandia Wars, the forces of the army would fight valiantly on behalf of the Republic in conflicts ranging from the Great Battle of Venetia, the Cataclysm in the Neutral Zone and the Siege of Vasuband. After the war ended, the New Republic hired the elite Kicath Agent known as Agent Upsilon from the Kicathian Republic States of Borealis to help train an elite squad of Republic Special Operations Troopers to defend the Republic in the uncertain galaxy of the future.

The Republic Army is the second largest fighting force in the Cyrannus Galaxy, counting millions of troops from thousands of worlds among its proud members. Logistically, the army is staggering in size and complexity, though manages to function quite efficiently—a tribute to the dedication that the Republic inspires both with regard to those who actively serve and the countless civilians of the Republic who count on the armed forces to keep them safe from the many enemies conspiring to bring about an end to democracy and self-determination in Cyrannus.

As with any military organisation however, the Republic army is organised along a regimented hierarchy of command to ensure unit cohesion throughout the galaxy. Officially, the army is ultimately overseen by the Republic's Senate, though in reality, it is the President who tends to represent the Senate in day-to-day strategic planning. As the commander in chief, all major decisions by the army must be made with the President's input, who in turn passes orders down to the army's top ranking generals.

Utterly different from the grand scale of other fields of the Army, Special Forces operates via a small number of elite soldiers to ultimately strike out against potential enemies when they are at their weakest, inflicting heavy damage with their weapons and tactical intelligence. Divided into squads of highly trained commandos, only the elite of the elite of Republic soldiers are approached with a position in SpecForces—the most famous of whom being Commander Corvexa of Banshee Squad, known for her service throughout the New Cyrandia Wars and the Cyrannian Cold War.

“All of us owe our lives to the brave beings in the army, who defend our worlds and ensure that the tyranny of Tyrómairon does not spread unabated.”

“Armies are a relic of warfare. What hope does a tank have against a fully armed destroyer? The Senate should pump more funding into the Navy if it truly wishes to defeat the Empire.” 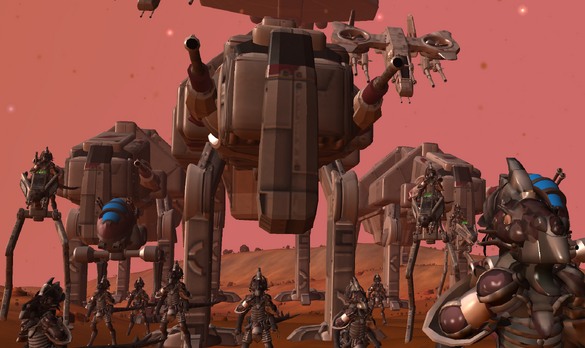 Retrieved from "https://spore.fandom.com/wiki/Fiction:New_Cyrannian_Republic/Military/Army?oldid=732094"
Community content is available under CC-BY-SA unless otherwise noted.