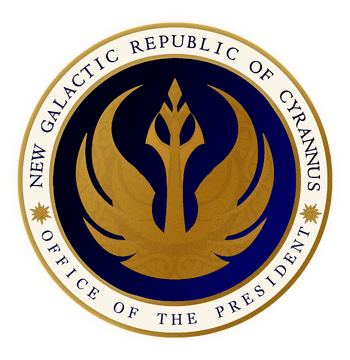 The New Cyrannian Republic Presidential Election, 07 NE was officially the second presidential election of the restored Republic, though most commentators considered it to be the first due to the incumbant President Apaltar running unopposed during the election of 05 NE. Though many expected Apaltar to run again, or his Proconsul to run in his stead, both Apaltar and Apollo declined to run. In the later months of 06 NE, several candidates put their names forward to the New Republic Senate to seek a nomination, though by Martex 07 NE, three major frontrunners came to the fore: Senator Nexarón Valkistair of Caelis'caeri, Senator Raesa of Adelentia and Senator Asharia Iessari of Ithirebor.

The election garnered Gigaquadrantic attention due to the ongoing quagmire of the Cyrannian Cold War.

Despite the ongoing turmoil of the Cyrannian Cold War, news about the race for President of the Republic dominated the media of the Republic for much of 07 NE, particularly upon President Apaltar's announcment early in the year that he would not run for the office, claiming that in these dark days for the galaxy, "we need new ideas and new leadership, now more than ever". Attention soon turned to Apaltar's Proconsul, the former President of the United Republic of Cyrannus, Apollo. Though immensely popular and frequently mentioned by political commentators seeking to root out potential candidates, the Proconsul announced that he would step down from the position at the end of Apaltar's term and instead seek a seat in the Senate representing his homeworld of Capricaerón.

Thus, the political playing field was thrown open to dozens of Senators, governors and planetary leaders seeking the highest office in the Republic. Quickly, several frontrunners began to emerge, amongst them Nexarón Valkistair of Caelis'caeri, Raesa of Adelentia, Asharia Iessari of Ithirebor and Amirtae Buroa of Achiliquin. Additionally, candidates from Angrenos, Londlithui, Ennoriath, Nevrasón and Mornuidhol put themselves forward but were generally overshadowed by the frontrunners. The resulting campaign focused largely on the geopolitical--and existential--threat posed by the Galactic Empire of Cyrannus, with Nexarón Valkistair quickly gaining popularity for his uncompromising refusal to deal with them. This viewpoint was considered to border on warmongering by Senators Raesa and Buroa, both of whom believed that the Republic should do its utmost to preserve galactic concordance.

Three months into the race, Senator Iessari ended her campaign and endorsed Senator Raesa following a continued slump in the polls. Two weeks later, Senator Buroa followed suit in supporting Raesa for the Presidency. Polls showed that Raesa and Nexarón Valkistair were neck and neck, with neither candidate showing an immediate advantage over the other. 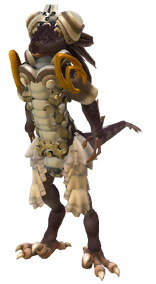 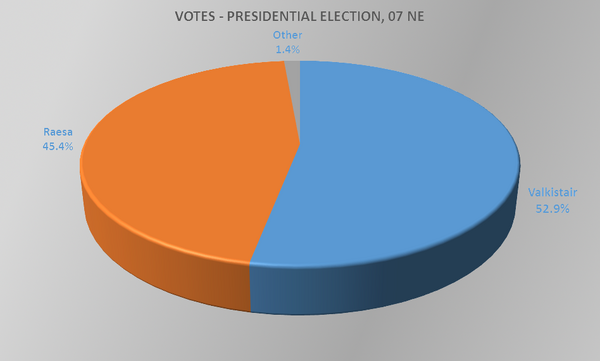 After a year of campaigning, the New Republic's citizenry went to the polls on 34 Novemex, 07 NE. Though many commentators claimed that the race between Nexarón Valkistair and Raesa would be one of the closest in the history of the New Republic and the United Republic, it soon became apparent that Nexarón Valkistair had won a decisive victory over his competitor, winning 52.9% of the popular vote compared with Raesa's 45.5%. Demographically, Nexarón Valkistair tended to do well in the frontier worlds along the neutral zone within the Galactic Empire of Cyrannus such as Venetia and Coruaan, while Raesa won more secure worlds such as the ecumenopolis of Coruanthor and Mou'Cyran. The extragalactic colonies were more divided. Raesa won an expected landslide victory in her native Quadrantia colonial sector—with the noted exception of New Capricaerón—while Nexarón Valkistair won in the Borealisan, Plazithian, Andromedan and Mirusian Colonial Sectors.

The election of Nexarón Valkistair—the first Trucinex to gain such a high office—was broadly welcomed, particularly when he offered Raesa and three other Presidential contenders positions in his cabinet in order to promote unity during the dark days of the Cyrannian Cold War. Two months later, Nexarón Valkistair would be inaugerated on the steps of the Senate Building in Republic City on Mou'Cyran in a ceremony attended by many dignitaries and heads of states, including the outgoing President and Proconsul. In his inaugural address, Nexarón Valkistair expressed his hopes for the future:

When four years ago the Republic was reestablished, we as a people stood single-minded in spirit. Though we knew that the path ahead would be arduous, we dedicated ourselves to the fulfillment of a great vision, one of a galaxy free of tyranny, of persecution, of rule by fear. We of the Republic stood defiant, as we stand today, against those who would trample on our liberty as a bulwark behind which the defenceless can take shelter. Even in these dark days, this has not changed. Indeed, let us not doubt the future of our democracy. The people of the Republic shall not fail, we shall never give into darkness. We, as a Republic, know the truth that democratic government shall always triumph over oppression, that we as a people are bestowed with the innate capacity to protect all of our people against threats once considered insurmountable, to solve problems once considered unsolvable, to defend those once considered beyond our reach.

I, Nexarón Valkistair of Caelis'Caeri, do now avow and affirm that I take the Office of the President of the New Galactic Republic of Cyrannus, and that I will protect and defend the sovereignty of the Republic with every fiber of my being.

“Ah the democratic process... The debates, the arguments, the twists and the turns. My idea of fun.”

“Pretty obvious to whom I am given my vote and support!”

“It is interessting to find out which one will be most favorable and benefital now for me in my new achieved position, now these elections might have an impact in my tenure as Chancellor of the Royal Crown”

“A worm rises in the pile of others.”

“Gorf tried to get self to run for president, but Dad Apollo scoffed at Gorf for a good 5 minutes.”

“The people of your Republic have spoken, and spoken well, electing a leader fortunate enough to possess what most lack: foresight appropriate to the moment, and the mandate of his mother country. Thus, Mr. President, I salute you as an equal, the legitimate head of state of a sovereign and proud country animated by the same virtues of liberty and democracy as my own.”

- Alexandre I of France

“Boy ain't this complicated. We usually just bring in leaders based on competence and have them retire when they get to old or kick them off if they become incompetent or corrupt. If they refuse... well then a quick assassination takes care of that! Then again I suppose this method does keep the floors cleaner though, so congrats!”

- Exarch Zuki of the Vanara Houses