“To defeat the Primercer, we must begin from below. After all, that is how one devours a whale; one bite at a time.”

The war to end to the Cyrannian Imperial State continues unabated, however, a more sinister threat to the Galactic Empire of Cyrannus lurks within the depths of the Cognatus Empire. An ancient enemy of the Emperor, the Primercer is a force of power rivalled only by one and his continued existence is deemed unacceptable by both the Emperor and his Phaedric followers. Word has reached Orbispira about the Blade of the Primercer, a powerful warlord and assassin in the employ of the god of the Cognatus and so in order to defeat the Primercer, the Lords and Inquisitors of the Empire must destroy him from below... 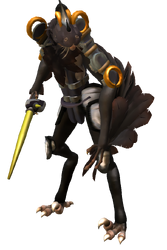 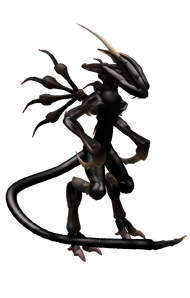 Blade of the Primercer: Cognatus Warlord

The sun was setting on the galactic capital of Orbispira, casting an illuminous golden glow onto the city world's endless skyscrapers. Sitting in an Imperial Shuttle, Grand Inquisitor Charcar'maer watched as the craft slowly descended into the cityscape toward its destination; the imposing Imperial Palace. Below, the Inquisitor could see the massive statue of the Emperor himself at the entrance to the massive multimile plaza leading up to the massive Palace complex. After a few moments, the shuttle touched down in one of the hangers dotted across the Palace and was greeted by a contingent of the Emperor's royal guard as well as several Palace officials organised to meet the lofty guest. As he stepped off the shuttle, the Inquisitor was approached by a short Basileus officer, who directed him to the suite of Lord Venatorius, one of the Emperor's mysterious emissaries and of all the Emperor's acolytes, the one most interested in the activities of the Imperial Inquisition.

The door to the office opened with a slight hiss. Venatorius' room was noticeably less ornate than the rest of the Palace, with its functionability more akin to an Imperial Star Destroyer rather than the centre of Imperial power. Gazing at the cityscape at the head of the room stood Lord Venatorius, adorned in his frightening armour and helmet with his arms held behind his back, hidden by his black cape. The Inquisitor bowed, though the Phaedric Lord remained in his place. Nevertheless, Charcar'maer knew that the Lord was aware of his arrival. The High Inquisitor did not presume to know why Venatorius had summoned him, though he knew better than to assume it was to do with the ongoing war with the Cyrannian Imperial State.

The Inquisitor was generally highly adept at reading people's emotions, though the words of Lord Venatorius made the very marrow in his bones tingle, as emotionless and sterile as the room itself.

The Inquisitor raised his brow, surprised at the line of questioning.

Finally turning to face the Inquisitor, Venatorius activated a hologram of a Cogsangui in black, sinister armour.

Bowing his head deferentially, the Inquisitor left the office keen on destroying the Blade and earning the favour of the Phaedric Lord and the Emperor.

Travelling in the void of hyperspace, the Inquisitor's Extinction-class interceptor was a fearsome sight feared throughout the galaxy. When it entered realspace, it cloaked in order to avoid the sizable Cognatus fleet in orbit over the partially glassed planet of Carthaniapian, the base on which the Blade of the Primercer allegedly occupied. The atmosphere of the planet was still recovering from the Neraida bombardment during the Great Cyrannus War though according to his sensors, it was breathable to Charcar'maer, who eventually touched down at the coordinates provided by Lord Venatorius. Exiting the interceptor, Charcar'maer surveyed his surroundings and noticed a lone building standing solitary in the glassfields. Using his blaster to destroy the door, the Inquisitor entered the room with his blade ignited, saturating the room with its unnatural glow.

The smoke filling the room masked a large figure armed with an energy sabre of his own.

With unnatural speed and ferocity, the Blade of the Primercer clashed with the Inquisitor, who deflected his attacks with a grace natural to his people. Knocking the Blade to his feet with a slam of his powerful tail, Charcar'maer held his blade at the Blade's throat.

Growing in fury, the Blade kicked the Inquisitor's leg, knocking him to the ground.

Using his natural ability of flight, the Inquisitor escaped a swipe from the Blade before locking swords with the Primercer's servant in a vicious duel. Headbutting the Inquisitor, the Blade kicked Charcar'maer into the glassfields outside the facility. Using powers bestowed unto him by his master, the Blade shot a bolt of energy from his fingertips, which the Inquisitor dodged by jumping to the left, though was unable to escape a second bolt, which sent him flying through the air and landing in a heap on the ground. Approaching with his blade ignited, the Blade approached the injured Inquisitor.

Just as the Blade was about to deal the Inquisitor a killing blow, two figures suddenly translocated behind him.

"You are inconsequential in the scheme of all things. Bow to the will of the Dark Lord and know true power."

Despite his immunity to fear, the voices of Venatorius and Agonânghâsh were enough to chill the bones of the Blade...

The Blade turned his attention away from the Inquisitor and toward the two newly arrived Phaedric Lords. Venatorius was garbed in his frightening armour, his glowing red eyes piercing the Blade's very being. However, even the image of Lord Venatorius paled in comparison to Agonânghâsh, who appeared to be surrounded by dark energies much like a black hole, with all surrounding light simply disappearing when it came close enough to the most powerful enforcer of the Emperor's will. Nevertheless, the Blade remained defiant.

The Blade boldly growled and prepared to pounce on the new arrivals. Venatorius motioned with his hand, grabbing the Blade with an invisible stranglehold.

With another flick of his wrist, the Blade was thrown to the ground at great force, cracking the petrified ground where he landed in a heap. Venatorius and Agonânghâsh approached the Blade, who struggled to get to his feet.

Agonânghâsh raised his claws toward the Blade, who began contorting on the ground in pain. Grasping at his head, the Blade was lifted into the air, the surrounding area around him turning into an impossible labyrinth of red and black, the only semblance of order being the outline of Lord Agonânghâsh, whose glowing eyes bared into the once fearless Cogsangui, bringing him to the cusp of madness. Lowering his arms, Agonânghâsh returned the scene to one of normality though the Blade continued convulsing on the ground.

Agonânghâsh turned and nodded at Venatorius, who nodded in turn. Using his powers, Venatorius snapped every one of the Blade's limbs, leaving him defenceless against any of the natural predators still roaming the icefields.

Awakening finally, the Inquisitor noticed only a faint black shadow disappearing before getting to his feat.

The Blade writhed on the ground as the Inquisitor's shuttle lifted into the sky. The sun above rose above his head twice, indicating the passing of time. However, after nearly three days of constant torment and pain, two figures translocated to his location. The Primercer and his newly awakened Oikoumene ally Qulmé. The two Ultraterrestrials regarded their acolyte with emotionless faces, their contempt and disgust for his failure hidden behind their haughty demeanour. With his arms outstretched, the Primercer healed the Blade of his injuries. Finally coming to his senses, the Blade fell to his feet before his gods.

With a tone of disgust hidden in his cool, arctic voice, the Primercer commanded the Blade to rise to his feet.

Retrieved from "https://spore.fandom.com/wiki/Fiction:New_Cyrandia_Wars/Year_Two/Shadow_of_Despair?oldid=652778"
Community content is available under CC-BY-SA unless otherwise noted.