Maiden Voyage of the Imperatore

Chathanglas
“Those who act contrary to Imperial interests will face the might of the Imperatore. I will keep the rebels in line.”

During the first year of the New Cyrandia Wars, the rebel Basileus Admiral Chathanglas launched a devastating attack against the loyal Imperial colony of Abrion, destroying the massive Executor-class Dreadnought Illustrious in the process. Keen to restore Imperial order to the region, the Galactic Emperor Tyrómairon prepares to contact one of his most loyal Grand Admirals in order to reward him with the command of the most powerful warship in recent galactic history... 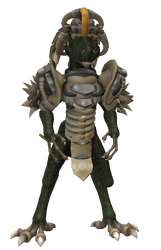 Two days after the destruction of the ICS Illustrious during the Battle of Abrion, Grand Admiral Carandial sat contemplating the ongoing Second Cyrannian War in the spacious and richly decorated ready room of his flagship, the Empirical. Though he honestly didn't care about the opinions of others, he noticed that where once his subordinates looked upon him with a degree of respect, he was now viewed with suspicion. Understandable perhaps given the role of his people in two rebellions against the empire during the past year. Nevertheless, Carandial was determined to prove himself in the eyes of the Emperor as a loyal imperial subject. As he sat watching the fantastical colours of hyperspace pass by the viewport, he received a top secret transmission from the Imperial Capital.

To his surprise, the image of Tyrómairon himself appeared on a nearby viewscreen, his hands templed. Carandial genuflected before the Galactic Emperor.

Carandial bowed his head as he stood upright. He folded his arms against his chest and nodded.

Carandial was perplexed. The Emperor wasn't exactly known as the "gift-giving" type.

Carandial was almost speechless. He had heard only rumours of the Nemesis-class, but dismissed them as a myth. From what he heard, the Nemesis-class was the most advanced class of warship within the Imperial Starfleet, so large they are capable of carrying entire squadrons of Star Destroyers and equipped with enough firepower to potentially conquer an entire galactic region, or as the more outlandish theories held, an entire galaxy.

Since her early days in the Navy, Carandial had shown a large degree of interest in the young Alavar, who was considered to be one of the most promising officers in the Imperial Navy. While he was perhaps not entirely convinced that she had earned enough experience to be granted control of one of the Empire's most powerful dreadnoughts, he none the less felt a certain degree of pride in his informal protege.

In orbit over Orbispira, Carandial watched in awe as his shuttle docked with the mighty Imperatore. It was clearly larger than any ship he had ever seen, being large enough to contain over ten internally docked Imperator-class Star Destroyers. With a slight thump, the shuttle touched down in one of the cavernous hangar bays on the mighty flagship followed by the hiss of the landing ramp opening. As he stepped onto the deck, he was greeted by a Libertus officer.

Nodding in acknowledgement, Carandial was soon directed towards the site-to-site transporter, instantly transferring himself and Rh'vaurek to the main bridge. Returning the salutes of the bridge officers, Carandial sat on the command chair, a sense of pride and patriotism filling him. Though he was somewhat regretful that he left his beloved Empirical behind, he was nonetheless confident that the Imperatore would prove to be the most powerful warship in Cyrannian history.

A cheer rang out throughout the ship as the crew of the Imperatore applauded proudly. On the bridge, Carandial gave the order for the fleet to engage the wormhole drives, almost instantaneously warping to their coordinates in the Outer Rim.

On the bridge of his flagship, Admiral Chathanglas sat watching footage of his devastating victory over the Imperial colony of Abrion, becoming the first individual to destroy one of the Empire's mighty Executor-class Dreadnoughts. As he watched the once proud ship crackle and burn under the intense turbolaser bombardment, his first officer noticed a vessel suddenly appearing several hundred kilometres in front of the State fleet.

A bolt of turbolaser fire lanced across space towards the corvette. However, it impacted harmlessly against the shields of a phased ship. Frowning to himself, Chathanglas and the other commanders of the State fleet watched in horror as dozens of Imperial vessels, large and small decloaked around the lone corvette, followed by the titanic Imperatore, which de-phased and turned to face the rebel fleet. On the bridge, Carandial smiled as he gave the order to fire.

Carandial decided to withhold from firing the main weapon, the matter cannon, which had never been used before in battle, just encase it failed to work. He was fully confident in his fleet bearing down on the foolish rebels, who were over-confident after their victory. With the Interdiction fields ensnaring everyone in the system and stopping reinforcements, he ordered superlasers, multi-terraton tubolasers and vortex torpedoes to be fired repeatedly. No mercy.

The shields of a good third of the rebellion had been silenced by the barrage of superlasers, while vortex torpedoes chased after fighters and smacked into the hulls, melting the hulls of several main cruisers into white hot plasma, characteristic signs of exploding black holes. Any crew within the vicinity were incinerated and irradiated.

Chathanglas knew that the ships hit couldn't be saved. By his orders, rebel ships courageously crashed through their dying frontal guard, firing their own turbolasers, disruptors and even vortex torpedoes. This surprised Carandial slightly, but nevermind, recordings of the situation could be use as anti-rebel propaganda.

The rebels were hitting all they had at the ships producing interdiction fields, they were moving out in dagger formations almost single file, and that meant a directed assault would only destroy the ships in front. The rebels obviously were passionate enough for such sacrifices. But they were not counting on the matter cannon...

Carandial set the order to fire the matter canon, his fleet stopped firing to witness the event. Chathanglas meanwhile was confused, but didn't order a break in formation. The Imperatore trembled as the cannon unloaded. It was emitting a colossal discharge of quark-gluon plasma at 99% the speed of light. The Imperatore had to thrust forwards so as not to be pushed back. The collapsing quarks created a dense soup of proton-electron pairs and neutrons. But the matter cannon packed a second wallop, a beam of high energy gamma rays which collided with the soup creating particle-antiparticle pairs all travelling 99.99% the speed of light.

The results were nothing but spectacular, and terrifying as petatonnes of energy were loaded onto one of the rebel formations. The vapourised remains of the rebel fleet in front only helped in destroying every ship.

Carandial, although taken aback by the sheer ferocity and overkill, chuckled to himself partly in awe. This was a DCP style attack, one the DCP would be impressed with. Furthermore, the snobs of other hyper-powers who claimed the Galactic Empire of Cyrannus lacked the upper edge in firepower using conventional weaponry now had eggs on their face. As if by magic, the weapon had quickly dispersed into a puff of ionised hydrogen. No harm would reach the annexed civilians of Albion.
Meanwhile the other rebel formations were in complete shock and disarray. Losing any strategy, the Empirical and the Imperatore, along with the rest of the fleet made short work of the rebels unable to escape, most simply tried to flee the Imperatore.

Chathanglas managed to escape in a small shuttle by sheer luck, he had not been in the eviscerated formation. He felt bad with himself for abandoning his fleet as they had given their lives to protect him. But in the frantic bustle he made a run for it to the other side of Albion, waiting for the interdiction fields to be switched off as his ground forces were scooped up via transport beams from orbit. He removed his admiral sigil and cried of anguish and terror.

Standing victorious on the bridge of the Imperatore, Carandial watched what little remained of the once mighty State warships crackle and disintegrate into nothingness. Throughout the fleet and in the liberated cities of Abrion, cheers rang out as the surviving State troopers were rounded up and imprisoned as traitors to the Empire. Though once considered a strict officer, Carandial allowed the main bridge to celebrate their great victory over one of the largest rebel fleets in the Southern Outer Rim. Approaching from behind, Captain Rh'vaurek and the newly promoted Admiral Rela Loupál saluted the Grand Admiral who returned their gesture with one of his rare smiles.

Carandial began to walk towards his ready room but turned as he was about to exit the still celebrating bridge, his eyes gleaming and voice somewhat cheerful. For a Basileus, of course.

As he entered the ready room, the image of Emperor Tyrómairon appeared, the distinctive skyline of the Orbispiran Palace District visible in the background. Carandial bowed.

The Emperor clasped his hands together, his expression content and his voice as cold as the depths of space.