Defeated, reformed into the Empire of the Murgur

“My race can easily stomp you flat on the floor if you do as much as look at us weird. And thinking we're dumb only make it worse, trust me.”

The Murgur Warbands wer eseveral factions of Murgur, violent, boastful and greedy creatures hailing from the Corrupted Sector of the Borealis Galaxy.

The Murgur are a species who hails from the desert world of Kaos, located in the now-named Corrupted Sector of the Borealis Galaxy. The ancient history of the Murgur has long been lost due to the lack of scholars in their race, but it is known that they have never achieved an unified culture and have been enemies with each other since before they became space-faring. Achieving spaceflight roughly 15,000 years ago, the Murgur society became divided in multiple warbands collectively known as Murgur Warbands. These warbands fought and destroyed each other regularly, and at the same time, the Murgur race began infesting the galaxy due to how fast they breed, gaining influence and fame for their formidable strength and combat prowess. Four Murgur warbands became permanent and made themselves the greatest among all of them: Kraknor, Muganda, Vorazius and Hegdar. The Kraknor Warband would be the greatest of all, with the strongest warriors and largest territory. The Muganda Warband became known as the most accessible to aliens and as the most social. The Vorazius Warband was known as the richest but most xenophobic, and the Hegdar Warband was actually taken over and became slaves of the Borealis Grox Empire.

The Murgur were present in the First Borealis Galactic War, where the Kraknor Warband used the war as an excuse to attack both the Zoles and the Wranploer, until they were eventually driven back. This event became known as the Kraknor Rebellion, which resulted in the deaths of millions of Zoles and Wranploer. During the Second Borealis Galactic War, the Murgur race was hit with the Hegdar Revolution, where the Hegdar Warband's link with the Borealis Grox was revealed. The event ended with the Warband being destroyed by the three others, the Zoles and the Niaka.

The Murgur returned to activity at the seventh year of the Ice Age, when the Warbands were caught in a civil war due to the Kraknor Warband's warmongering attitude. Muganda Groanknir, leader of the Muganda Warband of the Murgur, got in contact with Wragrot and convinced him to retake Kraknor due to Tismahgo's crimes. Wragrot eventually travelled to the Murgur homeworld of Kaos and fought Tismahgo one-on-one, killing him and obtaining the favour of the Murgur people. By doing this, Wragrot left Vekaron's team and founded the Empire of the Murgur, the first unified Murgur government in recorded history.

Edulia
Add a photo to this gallery

Reaching almost 4 meters tall in height, the Murgur are one of Borealis's toughest species. Surpassed only by the Cold Loron, the Zí-Jittorám and the Borealis Zazane, the Murgur are dangerous foes to fight at melee range. They are fast and agile creatures, and given their numbers, are a real threat to most minor Borealis natives. The Warbands were among the most populous factions of the entire galaxy. Murgur reproduce extremely fast and often encourage their servant races to do the same. Murgur are well known for their excellent regeneration abilities, being able of curing wounds in a matter of minutes if the body isn't exposed to combat stress.

The Warbands were governed by a Warmaster in kratocratic way. To be a Warmaster, one most defeat the previous one in honourable battle. Assassinations were considered taboo and Murgur who attempt, or even succeed, in murdering a Warmaster were branded as clanless and were either killed or banished from the Warband's territory. The servant species of the Murgur had very little influence, and the highest they could be in leadership ranks were captain of a small squad of other servants species. Most Murgur were brutish, rude, greedy and love to fight. They were notorious thieves, and could never be fully trusted. Some Murgur were more violent than others, with the Kraknor Warband being the overall most aggressive, and Muganda Warband the least.

Murgur tended to live rather rudimentary cities by the galaxy's standards, High ranking Murgur lived in more dignified fortresses, but most Murgur lived in cramped, badly designed populated centers, as the lack of non-warriors in the species made their cities grow in an uncontrolled manner. They were scavengers, and as such possess little bits of many different species, making their cities quite diverse in appearance. 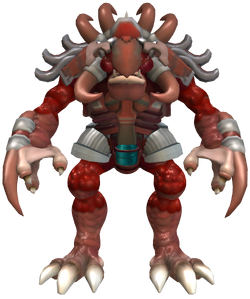 “For the Warmaster's glory, we spill the blood of our foes!”


The Kraknor Warband were commonly seen as the "standard Warband" due to having the largest population and influence of Murgur of all Warbands. They were well known for being the most aggressive of all warbands, murdering their victims in overly violent ways, as well as being incapable of diplomacy. During the seventh year of the Ice Age, Kraknor was defeated when Tismahgo died. 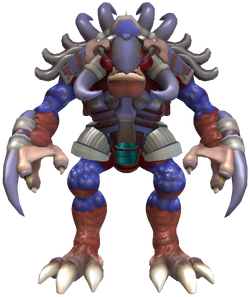 “We can work together, for the right price. Otherwise, I'll rip your legs off.”


The Muganda Warband were notable for being the overall "nicest" Murgur, which mostly concentrated on being bounty hunters rather than looters. This attitude approached them and the Wranploer, who usually hired them for their own dirty schemes. During the seventh year of the Ice Age, Muganda reformed its population into the Empire of the Murgur. 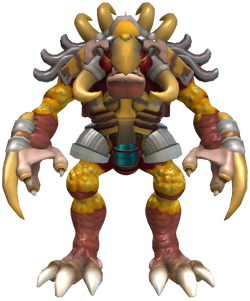 “Machines should not think! We smash machines to pieces!”


The Vorazius Warband were known as the richest of the warbands, having the most luxury of them all, which always resulted in jealously and attacks from Murgur rivals. The Vorazius Warband was also known for its xenophobia toward cyborgs and robots. During the seventh year of the Ice Age, Vorazius was destroyed by Kraknor, who absorbed all of their territories. 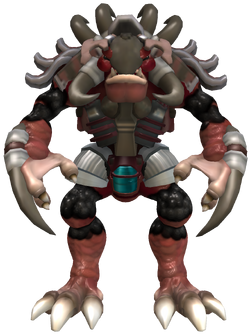 
The Hegdar Warband was the little known fourth warband, the few aware of its existence mentioned on its extreme secrecy, strange for a species like the Murgur. Very little was known about them, and they were rarely seen in action, but their few sightings had apparently being sabotaging the other warbands in multiple occasions. During the Hegdar Revolution, they were revealed to be pawns of the Borealis Grox Empire. The revolution marked the destruction of the Hegdar, the survivors being taken away by the Grox to be assimilated. 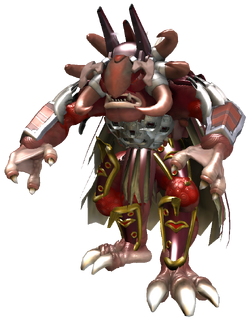 “You will all die in Kraknor's name!”

Kraknor Tismahgo was the last Warmaster of the Kraknor Warband. An extremely belligerent warrior with questionable sanity, Tismahgo obtained the throne of Kraknor in an assassination attempt which ended in the previous Warmaster, Wragrot, disappearing. Despite this dishonour, Tismahgo took over the Warband through fear and might, and was its leader for over 800 years. Tismahgo was one of the physically strongest Murgur known, and like all typical members of his Warband, he was a bloodthirsty soldier who enjoyed killing innocents and enemies alike. Tismahgo had no regard for his men and had only stood as their ruler through intimidation. 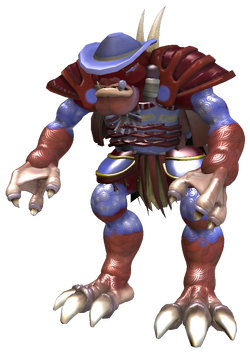 “I have no business with you as long as you do not disrupt me or my plans.”

Muganda Groanknir was the last Warmaster of the Muganda Warband. Groanknir is the closest the Murgur have to a traditional businessman, perfectly capable of making deals with aliens as long as he profits off them in the end. Groanknir has had deals with several empires in the past, including both the Zoles and the Wranploer, who have found use on his Warband's military capacities. Groanknir is overall more passive and easygoing than most Murgur. However, he is not afraid to get his hands dirty and kill enemies himself when provoked. One notable trait is that Groanknir believes an united Murgur government is possible through diplomacy and not bloodshed, and he supports the idea, even if he is not the ultimate ruler in the end, which eventually happened when the Empire of the Murgur was created. 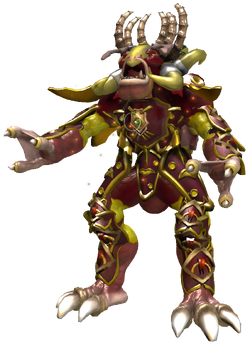 “Your riches belong to Vorazius!”

Vorazius Zukarnos was the last Warmaster of the Vorazius Warband. Often being called "greed in Murgur form", Zukarnos was well known for his affinity with gold and his never-ending narcissism, believing himself to be the greatest of all Murgur. Zukarnos was arguably a posh Murgur who judged people by their wealth, which was frowned upon by all Murgur Warbands but his own.

Zukarnos had an extreme technophobia, which started after the Great Purging. Zukarnos believed technology could not be allowed to grow sentience and had ordered his Warband to discard robotic enhancements and artificial intelligences. Due to this, the Vorazius Warband had become stagnant and was slowly becoming a defunct and dying government, by the hands of a man who cared for nothing but his wealth. 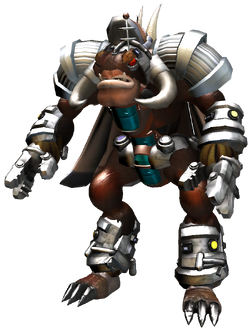 Hegdar Bistinus was the final Warmaster of the Hegdar Warband. A servant of King Mirras III, Bistinus was responsable for the Hegdar Revolution which had the Hegdar Warband conquering the Murgur homeworld of Kaos and nearly succeeding in mind-controlling the entire species until he was stopped by a combined effort of the three other main Warbands, the Zoles and the Niaka.

Very little is known about Bistinus, but as he was a servant of Mirras III, he is assumed to have been a mindless drone. Genetic experimentation was detected on his body through autopsy, implying he was one of Commandant Khensu's victims.

“I've misjudged the Murgur, yes. But are there members of this race who are idiotic brutes? Certainly.”

“Pirates of the worst kind, exterminating them is a good passtime!”

“Sometimes we can hire them to do some dirty work for us...but they are most of the time a nuisance.”

Retrieved from "https://spore.fandom.com/wiki/Fiction:Murgur_Warbands?oldid=604262"
Community content is available under CC-BY-SA unless otherwise noted.