“Alas, the time of the Oikoumene by flesh has passed, replaced with the Empire. Oikoumene by spirit and leadership.”

Like all Oikoumene, Morumadáin was born amidst the Valin'uvalyë, an energy synonymous with the enigmatic Thirteenth Tribe, though the details of his early existence remain obscured by the shroud of the past. A mighty warrior, against whom there were few equals among his kind, Morumadáin was a devout believer in the Path of Valin'uvalyë, an ancient belief system which revolved around the ancient saying, "all of this has happened before, and all of it will happen again", referring to the cylical nature of time, and harmony between the opposing forces of Light and Darkness. When the great Vector of Order, Tyrómairon rebelled against Erumaethran and the noble Estementari, Morumadáin united with his kin in opposition to the Dark Lord, and what he considered to be the perversion of the natural darkness with Tyrómairon's.

Thrice defying the Dark Lord, Morumadáin was responsible for defeating many of the Dark Lord's followers, the mighty Mornûnendur. However, when he was approached by Tyrómairon himself, Morumadáin found his core values deconstructed by the deeply persuasive Dark Lord, who promised an era of peace which would last into perpetuity. Casting aside his allegiance to Apolithanatár, the Lord of Light, Morumadáin rebelled, as the Apotheosis began to reach its conclusion. Through unknown circumstances, Morumadáin's physical form would be banished from corporeality, as close as an Oikoumene could ever come to death, and thus he would remain until Tyrómairon's return during the Intergalactic War. Reviving Morumadáin, Tyrómairon began to plot his return to power, a plan which eventually culminated in the establishment of the Galactic Empire of Cyrannus—a vessel through which the Dark Lord planned to impose Oikoumene dominion over all.

“Flee kirus and curse in vain. Consider yourself fortunate that the Dark Lord does not desire your death, for I would gladly grant it to you.”

During the New Cyrandia Wars, Morumadáin arrived on Phaedron during a duel between the Phaedric Lord Venatorius and the rebellious Mortalitas Zillum. Casting him away, Morumadáin was suddenly confronted by the Primercer, who attempted to convince Morumadáin to abandon Tyrómairon and join his cause. When Morumadáin refused, the two engaged in a vicious clash, during which the Primercer defeated him and cast him from Phaedron. Ultimately, however, the Primercer would be defeated, although soon after his defeat, the Lord of Light himself returned due to the actions of an ortellan child. Bracing himself for the war to come, Morumadáin prepared to once again face his former leader.

A being of few words, Morumadáin was regarded as one of the most fearsome Oikoumene in battle, during an age in which such prowess was often overlooked in favour of one's intelligence and mastery of Valin'uvalyë. Nevertheless, though less powerful than Apeligateza and Thaurlathrón, Morumadáin is among the most powerful Oikoumene, whose wrath is terrible to behold. Nevertheless, among the Mornûnendur, Morumadáin is the most likely to counsel caution and restraint, retaining a belief that each mortal life is precious, and that as Oikouemene, even the Mornûnendur should not forget their roles as guardians and overseers, rather than tyrants and monsters. Nevertheless, Morumadáin believes that, in the grand scheme of totality, Tyrómairon's plan is the last and best hope for an ordered universe.

“His prospective differs from my own. So much the better for the continuity of the Dark Lord's vision.”

“A formidable warrior, he is a fundamental part of the Plan. We shall see it done together.” 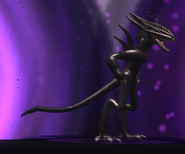 Retrieved from "https://spore.fandom.com/wiki/Fiction:Morumad%C3%A1in?oldid=759447"
Community content is available under CC-BY-SA unless otherwise noted.