Former military arm of the Oikoumene
Sect of followers of Tyrómairon

Led by a Herus (Dark Lord)

A new age has come.

“The time will soon come, for as darkness has always been eternal, so shall our power. My kin—the Oikoumene, my Mornûnendur—we did not pronounce judgement on that which we ruled. Neither must you. We moved stars and shaped them to our will. We warped space and time, twisting the cosmos to our design. If a species died in the process, so be it. The lives of most are of small consequence. This is what our foes fail to understand, that life requires a guiding hand, an outside force to effectuate evolution. We are that guiding hand, Meketanor. Do not mistake your blades, your energies, as the source of your power. No, true power need not bare teeth, claws or weaponry. We can subdue with the manacles of astuteness or by our very force of our being.”

The Mornûnendúr, originally known as the Warriors of the Revelation are an ancient and mysterious sect of individuals serving under the direct control of Tyrómairon, Dark Lord and Emperor of the Galactic Empire of Cyrannus. Originating in ancient times, the Mornûnendúr initially served as the elite military of the Oikoumene civilisation and even today is ruled by remaining Oikoumene individuals including the Dark Lord Tyrómairon and various other less power Lords. In modern times, the Mornûnendúr rose again after millions of years of inactivity and began to recruit powerful members of other less advanced races to do the bidding of the more powerful Oikoumene.

Striking from the shadows, the lethality of the Mornûnendúr was well known across the Oikoumene civilisation with the Mornûnendúran leader, Tyrómairon being considered the most powerful Oikoumene in existence, not only due to the vast military might under his command, but because of his mysterious powers that defy even Oikoumene knowledge. In modern times, Tyrómairon used these powers as well as his own resolve and meticulous planning to bring about Mornûnendúran rule by creating the vast Galactic Empire of Cyrannus. The creation of the Empire opened the ranks of the still entirely secretive sect, resulting in the indoctrination of several powerful beings designed to do the Dark Lord's bidding.

“We must maintain order in the mother galaxy.”

Like the Oikoumene themselves, the history of the Mornûnendúr is utterly known. Perhaps the details regarding the origins of this mysterious group reside only in the incomprehensible minds of Tyrómairon and the other remaining Oikoumene leaders, though if this is the case, there is no way to ascertain the truth for certainty. When the Mornûnendúr were eventually established as the "Warriors of the Revelation", they were led by Tyrómaironás, a fair and just individual considered by most to be the most powerful Oikoumene in existence. Other notable Oikoumene known to have joined the Mornûnendúr in this era were Ekrillium and Apeligateza,who continue to serve Tyrómairon to this day. During the Apotheosis Era, the Mornûnendúr were responsible for crushing any and all rebellion against the Oikoumene civilisation. However, the Primercer, the leader of the Oikoumene grew jealous of the power Tyrómairon had amassed and attempted to destroy the Mornûnendúr from within.

Millions of years after he began his long hibernation, Tyrómairon awoke during the Intergalactic War in a more different world. It is unknown why Tyrómairon choose to awake at this time in history, but some believe he was brought out of hibernation by the meddling of crashed Republic troopers. Nevertheless, he quickly began to gather any and all information about the current timeline, eventually forming the intricate stages of his Grand Plan around the current political atmosphere. Wasting no time, he began to reassert his dominance, with many powerful acolytes quickly joining him, believing that he was a god. Tyrómairon also began to reawaken some of his chief Mornûnendúran lieutenants such as Ekrillium.

During this time, the Mornûnendúr came into conflict with the ancient Atlantica, former allies of the Oikoumene and a definite threat to Mornûnendúran plans. The conflict resulted in many deaths and destruction on both sides, but ultimately ended with Tyrómairon mysterious making peace with these powerful enemies, no doubt for some nefarious purpose.

“t is time, my Mornûnendur. By failing to cast the Traitor from corporeality, I have loosed damnation upon this galaxy. It is time for that failure to be rectified for now and all-time.”

When Tyrómairon began to finalise the first stage of his master plan, he formed the Galactic Empire of Cyrannus, ending the Great Cyrannus War and bringing about the order that the Mornûnendúr craved. Meanwhile, the many acolytes served the Emperor's wishes to the best of their ability, infiltrating enemy factions and eliminating potential threats through the galaxy and beyond. However, when the Cognatus Empire managed to awaken the ancient Primercer, the Mornûnendúr were forced to mobilise for war. Led by the acolyte Agonânghâsh, the Mornûnendúr managed to cause severe damage to the infrastructure of the Primercer's new capital but ultimately failed to kill their old nemesis.

Over the next several years, the Mornûnendur and their Phaedric acolytes continued to plot and act against the Primercer's forces on many occasions, leading to the awakening of two new Oikoumene Qulmé, Lieutenant of the Primercer and Thaurlathrón, strategist of the Mornûnendur. Though the conflict would be destructive, it would be fought behind the scenes and end only during the final days of the New Cyrandia Wars, when Tyrómairon himself travelled to the Cognatus capital of Cognalorilos, where he faced both Qulmé and the Primercer. Though the battle would be epic and destructive, Tyrómairon was victorious, casting down his foes only to hear that the Other would soon return. Perturbed, Tyrómairon secretly began to prepare for this eventuality.

In the ancient times when the Mornûnendúr served as the main military force of the Oikoumene, Tyrómairon held the title of "herus", a title loosely translated as "Dark Lord". The Dark Lord holds complete control over the entire organisation, which revolves around Tyrómairon's millennia long plan, which spans entire empires, civilisations and species. Tyrómairon is the only Dark Lord of the Mornûnendúr to exist and is commonly believed to directly behind the creation of the Mornûnendúr. Under Tyrómairon, the Mornûnendúr have endured for millions of years, long after the rest of the Oikoumene race mysteriously vanished. Tyrómairon's plot ultimately resulted in the creation of the Galactic Empire of Cyrannus, though this is only the first stage in his grand plan.

Tyrómairon is not the only surviving Oikoumene in the Mornûnendúr. soon after his rise during the Intergalactic War, the Dark Lord awakened many of his most loyal followers from ancient times. These Mornûnendúran "Monaus" serve directly below Tyrómairon and follow his will to the letter. Presently, there are only four Monaus in active service to Tyrómairon, Ekrillium, Apeligateza, Morumadáin and Thaurlathrón, though the Dark Lord has expressed active interest in reawakening more of his former trusted lieutenants. The Monaus are also served by the acolytes, though some like Ekrillium distrusts their use. 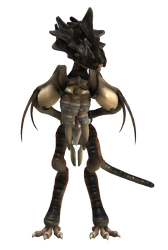 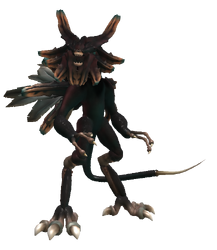 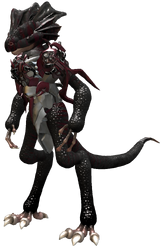 Acolytes are the lowest rank in the present incarnation of the Mornûnendúr. The title did not exist in ancient times, though when Tyrómairon rose during the Intergalactic War, he discovered the power of the many sentient races that now inhabited the Gigaquadrant. Impressed by their power and resolve, the Mornûnendúr began to recruit and create "acolytes" designed to carry out the will of the Dark Lord and the other Oikoumene leaders. When the Galactic Empire of Cyrannus was created, the ranks of the acolytes began to slowly but surely expand, with powerful individuals joining a field of their particular expertise, such as assassins, warriors, justiciars and scholars. The most powerful acolyte is the sinister Agonânghâsh, a dark shadow of despair created from the unnatural powers of the Dark Lord himself.

Curiously, an unusual family structure exists among the acolytes. The Mornûnendúran Lords encourage this sense of comradery, believing that the acolytes work more efficiently.

“We restore order to the orderless.”

“Why do you resist the inevitable?”

“Obstacle to the Dominion.”

“They are nothing but fiends! And they say we are the demons.”

“I will serve the Warriors with all of my power to the very end of my existence.” 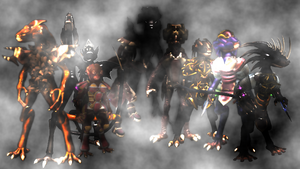 Retrieved from "https://spore.fandom.com/wiki/Fiction:Morn%C3%BBnendur?oldid=759444"
Community content is available under CC-BY-SA unless otherwise noted.