Hailing from the same species as Levarrion and Gorubla, Morglûkia is a criminal slug like create found on the moon of Anummiae, 2nd moon of the Rambo Capital. Often called Morglûkia the Great he has his criminal headquarters on the moon. From the outside it seems like a simple office, instead it houses Rambo Nation her most influantial and powerful criminal. He is the nephew of Gorublia and Morglûkia is evil and ruthless for both his servants and enemies.

Morglûkia hails from somewhere within Quadrant 21, but his species was forced to relocate to Quadrant 82 due to the Secoolian treat and presence. Showing up in Rambo Nation records around 6 BQF he was already present during the Second Galactic War and the Intergalactic War, profiting from the war and his rivals, the Syndicate difficulties finding jobs, Morglûkia was able to buy an office at Anummiae, which became his headquarter. Many of the citizens of the moon respect him as he helps them with troubles but also finances various festivals or events at the moon. Thoug close to the Senate Executive Palace, he has found ways to be kept out of the law sight and is very very succesful. Though there are suspictions against Morglûkia, none have ever been proven.

At 03 AQF, the Nation was contacted by the Confederacy of Allied Systems, they proposed peace. Morglûkia disliked this event and hired the bounty hunter Zevracence to kill the CAS representative who would visit the Senate Building at Väeressaë. This would mean peace would not happen and his smuggeling routes would still provide a lot of profit. He was pleased as later on in the year 04 AQF the Confederacy and the URC declared war on eachother, drawing Rambo Nation with them into the conflict. He earned a lot of profit, yet during the 4th month the Confederacy managed to conquer Karzhamahri Nui, brilliant plan by CAS Admiral Lizaconda.

With the following weeks the Ramsoria Run was breached and not civilian ships were allowed to travel over the populair trade route. With less income Morglûkia contacted Zevrancence, the bounty hunter. But he couldn't help, he was trapped on the planet he was due to the breach of Ramsoria Run.

After the holo transmission he ordered his slave servant, the Feolhviaeri slave Ktrn to find a way to come into contact with Confederate officials. However as the Rambo began a counter campaign against the Confederacy it wasn't needed anymore and Ktrn failed in her efforts.

After her return Morglûkia his influance and wealth increased due to his smugglers escaping Rambo Nation ships at the Ramsoria Run. In the twelth month of the year 04 AQF Senator Chuinaylia visited Morglûkia with a request to hire Ktrn for a mission. At first Morglûkia refused but when Chuinaylia showed him a free pass from Rambo controls he eagerly accepted. Happy he escorted Chuinaylia and Ktrn outside, and placed his hand at Chuinaylia her hip, though she didn't comment on it. Morglûkia was happy with this, perhaps one day the senator could become his servant after all. Afterwards he returned back to his daily matters.

During the fifth month of 05 AQF he allowed one of his smugglers, Ramindia to lead a smuggler fleet to attack a New Basileus Empire fleet blockading an URC trade route. After victory Ramindia returned and gave 30% of his bounty to Morglûkia, who was happy with the new income and the new way to smuggle spice and more to the Core Worlds of the United Republic of Cyrannus.

Yet with the sudden change he was quite happy as he would get more income from his smuggling activities and could ask a highter price due to increased Rambo Nation security. Around the start of 01 NE/05 AQF sixth month the crimelord grew bigger and more fat than ever before, signaling his wealth and power throughout the Quadrant.

When the Galactic Empire of Cyrannus was formed Morglûkia saw new chances at profit and increase of wealth and power. However Rambo Command and the senate agreed to send the Angforst to blockade the Quadrantia-Cyrannus wormhole. As such the sole entry into Cyrannus was off limits and Morglûkia saw his profit going downhill. When the second month started of 05 AQF his nephew, Gorubla managed to get him inside the senate executive palace and Morglûkia confronted Chuinaylia with it. He claimed that their deal wasn't furfilled this way, as the year wasn't over yet. Chuinaylia her voice betrayed that she didn't like his appearance but none the less she gave him what he wanted, a small window into the security of Angforst which allowed small freighters to pass. Happily he went back to his own office to plan his new smuggling routes and activities.

Upon a paradox at Rambo City where one of his smugglers, Uruviel became involved in he was contacted by Empress Ramashe who ordered Morglûkia to lend Uruviel to aid the Nation. Morglûkia at first refused, claiming that something like that would cost her a lot of money. However Morglûkia complied with the Empress when she gave a direct order to do so (the Empress is the only one who can do this in the entire Nation if it is for state matters). Ramshe also backed up her order with a threat, if Morglûkia would not comply she would send the authorities to him to investigate his criminal "empire".

After a year of Rambo "protectrate" profit went down for Morglûkia. With increased security measures by the Empire it became difficult to always have success with smuggling. When the Prince Naxor, taking the identity of the Dark One, leader of the Blackstar Cartel proposed an alliance Morglûkia accepted. He invited the Prince to his office and also invited his prized bounty hunters, Ktrn and Zevracence to be present. Naxor was accompanied by his servants Trodaka, Sentry and Sotrakh. The party was fun, with lots of music and drank, dancing slave Yunilinage an alliance was made. During the meeting Morglûkia himself became a bit of drunk, and was happy with the alliance made and allowed them to leave the planet safe again, if the meeting did not meet his expectations he would have killed his visitors.

Within the first weeks Morglûkia regained new profits and re-ensured his power in the criminal circuit within the Quadrant Galaxies. In the fourth month of 06 AQF/03 NE, Morglûkia grew annoyed with his best bounty hunter, Zevracence. Together with Uruviel he stole an experimental Hutter warbird. Fearing unwanted attention from authorities, and a theft without his permission he wanted to unleash his wrath upon Zevracence. However Morglûkia was contacted by the leader of the Cyrannian Syndicate, Flovos Pretio before he could unleash his wrath at Zevracence. Though he never met the Capricyránae, the rumors about him at reached his ears. Intriqued he listened to what Flovos had to say and eventually agreed to resque a Chinwakya named Adelheidis at Flovos demands. Flovos would travel to Morglûkia's holdout while Zevracence and Uruviel would complete their new mission. Pleased he contacted Veldiaviëa-his sister to give Zevracence and Uruviel his ultimatum or to accept this new mission. Accept the job, and he would forgave them the crime of stealing a ship without his permission and the promise they would live another day.

He then ordered Ktrn to make preperations for Flovos arrival, with Rambo authorities unaware that he was coming. Upon their arrival, he invited both Flovos and his companion, Queen Asenath of the Panthrea Slaver Guild inside and offered them a drink. Though Flovos already agreed with the freeing of Adelheidis in turn of a new Cyrannian ship, Asenath was not so easily convinced and desired that all slaver ships to operate freely within the Quadrants. In return, she would Morglûkia a share of the captured slaves and any material possessions they would find. Surprised, he hesistantly agreed with her terms, as he hold possesion over the patrol tours of the Rambo Nation navy patrols, it could work out perfectly.

Afterwards as both officials left, Morglûkia was pleased with how things turned out. It seemed a new criminal triumvirate had formed itself to rule over the criminal underworld within the entire Cluster. A while later Morglûkia was informed of the so called Draconid Act. A decision made by Empress Ramashe that enabled the Draconid Imperium to expand their colonial presence within Quadrant 82. Though he didn't mind their expansion, Ramashe her allowance for their aid in patrolling Rambo Space as well was something Morglûkia disgusted, as it would make his employees as a criminals and smugglers a whole lot difficult, possibly resulting in a loss of profit. Perhaps when all was settled, he should visit Chuinaylia again to gain new patrol schedules of both the Draconid and Rambo patrols in certain colonial sectors.

Morglûkia is ruthless to both his servants and his enemies. After he arrived in Rambo Nation he has shown himself as a capable and cunning crime lord, who soon rose out to become the most influential criminal crime lord of the Quadrant Galaxies. As Rambo Nation never experienced such an underground criminal network Morglûkia managed to set up his own imperium within months without much interference of Rambo Nation authorities.

Morglûkia expects full loyalty of his servants and demands that every smuggler and bounty hunter will do everything to accomplish their mission, and when captured that they do not point their finger in his direction. Morglûkia is also known to like diners and female attention, like he showed with Ktrn and Senator Chuinaylia. Morglûkia is very fond of his pet, a white Ramar Shaddarian Wolf by the name "Growler".

He was given an Anggressor-class cruiser wich know acts as his personal yacht, known as the Delicia Luana. 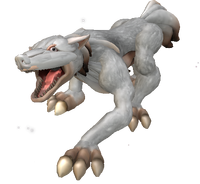 Ktrn, his most trusted bounty hunter and gives him personal massages.

Uruviel, a young yet great pilot.

Zevracence, a loyal bounty hunter who is often employed by Morglûkia. Is often assigned on the most dangerous missions.

“A most disturbing creature, claiming to be the most influential crime lord of Rambo Nation. Though he aided me in saving the Chairman, he dared to touch my hips!”

“A crime lord of Rambo Nation, his reputation is well known to Rambo Command but he still manages to avoid the authorities. A cunning individual indeed.”

“Our buisness dealings shall be most profitable. May those who oppose us know not to cross us.”

“Keep up the good work! If the Rambo authorities STILL haven't found you, they must be even more incompetent than the ones trying to catch me! ”

“I dunt see why mah boss wants ta ally yas. Yer just a big fat slug, an you can't even fight, an you've got these weird fetishes an you should get a life!”