“The history of the galaxy is full of bloodshed, death, sorrow, and misery but also victory, perseverance, prosperity, and glory.”

The Mirus Galaxy is a galaxy located within the Ikiwa Eropsii Cluster of the First Gigaquadrant, quite close to the vast intergalactic void leading to the Cyrandia Cluster, with which the galaxy's natives often have an intertwined history. Much of the history of Mirus has revolved around the United Lanat Empire and the Drakodominatus Tyranny, though the galaxy is also home to a great number of other civilisations such as the Waptoria Alliance of Species and the Unified Federation of Glory, many of which have unified into organisations such as the Unified Alliance of Enlightenment. After playing host to apocalyptic conclusion to the Dominatus War, many of Mirus' natives have become embroiled in a conflict with the waring Xonexi Allies and Delpha Coalition of Planets for control over former Dominatus space, while the United Lanat Empire begins to reassert its control over the central territories of the galaxy, though the control of the Galactic Core is contested by the Alpha Cyber Collective, who want its abundant energy for themselves.

The ancient history of the Mirus is shrouded in mystery but it is known that there once was a powerful 'First One' empire that spanned over half the galaxy known as the Uonic. The Uonic left little behind and what has been left is either useless or so damaged it can't be used. Another mystery about the Uonic is that it seemed they almost disappeared without a trace. There was no signs of steady decline, just a sudden disappearance. A few theories exist of why the Uonic disappeared but most agree that such an advanced empire could not be destroyed by force.

Shortly after the disappearance of the Uonic, a new empire took power of the Mirus Galaxy. It was the empire simply known as the Enlightened Ones. The Mirus Galaxy was at that time dangerous with ever-changing space debris fields, and strange phenomenons such as false visions and hallucinations, with made it, generally speaking, sparse of life. The Enlightened Ones somehow banished the anomalies and the debris fields. They then started to create a lifeforms, and scattered them across the galaxy. Eventually, they made the mistake of taking in a group of renegade Grox colonists to fight against Meta-Grox colonists around the core, and upgraded them into what would become known as the Alpha Grox. These Grox, however, rebelled and used their control over cybernetics to transform themselves into the masters of the Meta-Grox colonists. Thus the Alpha Cyber Collective was born, and destroyed the Enlightened Ones, or so it was thought, before turning to dormancy on the worlds around the core.


The species the Enlightened Ones created began to become space faring and colonize the stars but none of them would ever reach the full extent or technological might of the Uonic or the Enlightened Ones. Several galactic super powers rose to power. One empire of faith, one of trade, and one of war. These empire kept relative order in their respect areas of control and had little quarrel with each other. But after awhile tensions began to build between the three superpowers as their power grew. A massive war broke out between the three superpowers and their allies and in a desperate fight for control over the galactic core they ended up destroying themselves and many other smaller empires. This alwo awakeded the Alpha Cyber Collective from their slumber, who abrubtly started to strip nearbly planets of their recourses to feed their massive fleets. After the collapse of the three superpowers, nothing was to stop the smaller empires from waging all out war with each other.


The Mekkans are a species of Mechanical sentients that only want Destruction of Organic Life + Grox. The Mekkans in the Mirus galaxy have been inactive for over two thousand years, and have just been reactivated by someone by the name Sauron. Many assume Sauron was the Mekkan's Creator. Others suggest that Sauron was a coincidence. Either way, the Mekkans are a large threat to the universe, if left unchecked, and it's numbers are expanding at a rapid pace. The Mekkan Collective is what holds the Mekkans together. And the one leading them is the Collector, a strange being that is barely held together by a bunch of wires. The Collective is rarely researched, and few have information on it, for example, the Dragonoid Empire

After the fall of the three superpowers chaos and war reigned supreme over the Mirus galaxy but after several hundred thousand years of constant war things began to calm down. Several small interstellar empires would rise up but none could manage to become complete galactic superpowers before collapsing. The Tralor would emerge in this period as the dominant race in the galaxy, building an empire which would eventually develop into the United Lanat Empire, a menace to the Cyrandia Cluster as much as Mirus. Meanwhile, the Unified Alliance of Enlightenment broke out over Mirus, resulting in the return of the Enlightened Ones and redrawing much of the political map of the galaxy as it did rise to the Unified Alliance of Enlightenment, which aimed to bring peace and prosperity to the galaxy, and marked to first time the Imperium of War would extend their waylike plans to the whole galaxy instead of just to their sector of space. This same period also saw the rise of the Drakodominatus Tyranny, which expanded expodentially throughout the entire Gigaquadrant with the aim to conquer it in its entirety. The resulting war later on would be one of the deadliest in the Gigaquadrant's history and by the time it ended, Mirus would be changed beyond recognition a second time.

The end of the Dominatus War would result in the so-called Scramble for Mirus, when the Xonexi Allies of France, the Tybusen Intergalactic Allied Federation and the Draconid Imperium against the Delpha Coalition of Planets seized key territories of former Dominatus space without consulting the galaxy's natives. This drove up tensions between the natives and the Xonexians, resulting in the creation of a new alliance of natives, former friends and foes alike, to expel the interlopers. When the Great Xonexian Schism reached Mirus, conflict between the XA and the DCP occurred throughout former Dominatus space. Meanwhile, halfway across the galaxy, the Galactic Empire of Cyrannus began an unseen expansion toward the heart of Mirus. 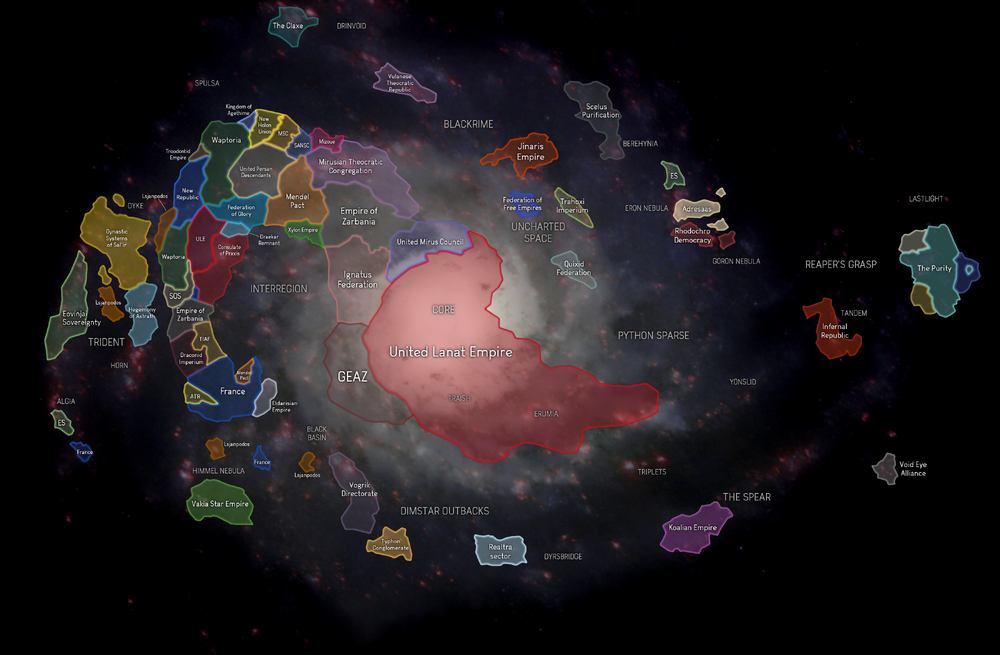 This is a region of space at the westernmost point of the Mirus Galaxy that has is rife with dying stars, dead stars, and black holes. In addition to this, it also has plentiful normal stars which support life on paradise planets, which stand in stark contrast to the life that is spawned near the dying stars. This sector of space has 100,000 solar systems of all forms, ranging from ones based around hypergiants, to those around neutron stars among others. That number, however does not include the black holes in the area. This region of space, was completely controlled by the Drakodominatus Tyranny, and accounts for just less than 10% of the solar systems that they currently occupy.

The Traish Sector is almost under complete Tralor control. The Traish sector is noted in being one of the most prosperous, safest, and oppressed sectors in the whole galaxy due to the firm hand of the United Lanat Empire. Tralor are the most politically influential of all the Mirus races. They are known for being skilled warriors, stubborn traditionalists, and at times fierce conquerors. Due to the Tralor's brutal fighting style and past alliances they often get wrote off as simple minded brutes but that is hardly the case. Tralor are a surprising philosophical race with a deep respect for the arts.

“Mirus belongs to us. Forget this at your peril.”

“War flows freely here as money does in our neighbouring galaxies. Hail Mirus, for it's constent struggle have made it strong.”

- Imperator Caligustus of the Imperium of War

“Much has changed since I first beheld this galaxy. At one point, I would've been satisfied with seeing it burn as a glorious sacrificial pyre to my power. Now, I wish for nothing more then peace this day forward. Yet, such things are not always possible...”

“Mirus, is our home, and we are her guardians. Imperialism seems so rampant now adays. Powers seem to think this galaxy nothing but a savage breeding ground for war. But, beautiful Mirus is far more then that. So much more.”

“Our home is where we start our universal cleansing. From here, the entire galaxy will be wiped clean of mistakes.”

“Organic life is Irrelevent, all shall bow to us. Surrender and be assimilated.”

- The Collector of the Mekkan Collective

Add your own flags! 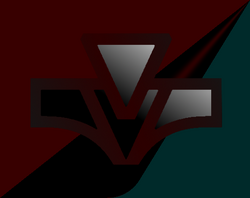 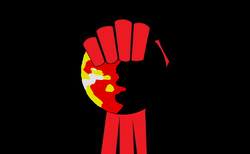 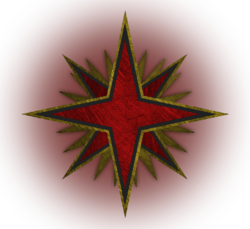 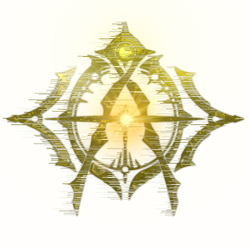 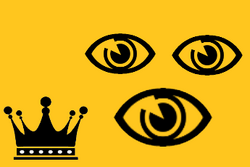 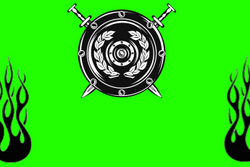 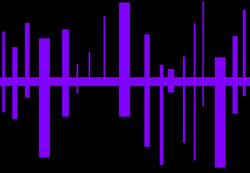 Retrieved from "https://spore.fandom.com/wiki/Fiction:Mirus_Galaxy?oldid=861934"
Community content is available under CC-BY-SA unless otherwise noted.