Capacity for at least 10,000 civilizations.

N/A
The Milky Way Galaxy (also known as the Plazith Rim, Vintergatan, among uncountable names) is one of the major galaxies in the Gigaquadrant. Spanning between one hundred thousand and one hundred and ten thousand light years in diameter, the Milky Way is known as one of the most diverse galaxies in the Gigaquadrant, being the home of many civilisations such as the Delpha Coalition of Planets, the various states of Humanity, the Indoctrinate Collective, the Salsetthe Republic and the nations of the Katar Sector, amongst many others. With so many varied civilisations, the history of the galaxy is endless. Only the most ancient civilizations know what had happened millenia ago, but rarely share their memories to the younger races, which are nevertheless growing in their own power and prestige. Up until recently, most extragalactics saw the primary face of the galaxy as the Civilisation, though the dominance of this faction has been questioned in recent decades. Very suddenly, a large empire of Pilgrims have appeared.

The history of the galaxy is vast. Only the most ancient civilizations know what had happened millenia ago, but rarely share their memories. Wars are in bold. Large sections are broken down into sectors and arms, so some information might be repeated where relevant.

The emergence of life

At some point in this era, the Milky Way's Precursors began to evolve "First Ones", Pseudomorphs and Draconians, joining the ranks of the Ardenta Grox and Xynaxes as rulers of the galaxy (see Plazith Rim Precursors). 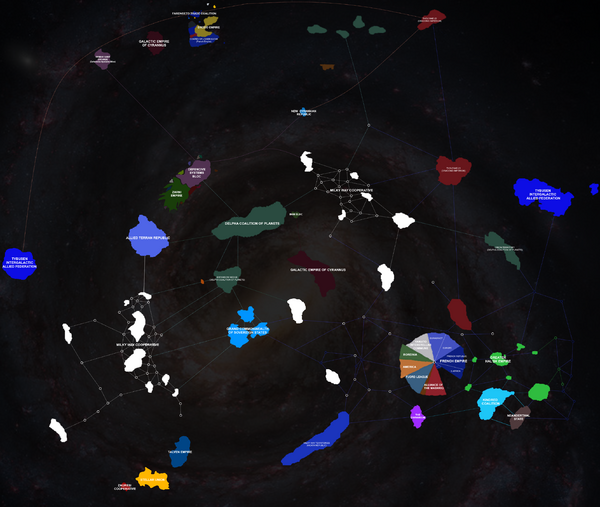 A political map of the Milky Way, circa 2806 CE

The Milky Way is between 100 and 120 thousand light years across, and contains over 400 billion stars. It is one of the largest and most influential galaxies in the Local group of galaxies (partly because many empires in fiction are within it). The Milky Way completes a full rotation about once every 50 million years. The disk is about 1,000 light years thick and the bulge is about 12,000 light years thick. The halo that surrounds the disk and arms is 180,000 light years thick, and contains mostly old stars and hypervelocity stars that have been kicked out of the galaxy by the Galactic core. The Halo is a very poor place to colonize and contains few planets with life and fewer colonies than the disk. The DCP has colonised Far Star, named after a comet in the Chilius system. The Halo also contains globular clusters and some dwarf galaxies that are getting shredded and absorbed into the Milky Way.

The Milky Way does not have one dominant faction, but does contain very large and powerful empires. The Milky Way is a very big galaxy compared to most, and has over 400 billion stars, so there is lots of room for many, many factions. Because there is so many, it would be very difficult to create one large alliance or even conquer the entire galaxy, although the DCP's territories are expanding more quickly than most. There was an extinct galactic empire that existed millions of years ago known as the Coadunation of Autonomous Beings, but the members such as the Naucean are thought to have ascended.

Due to recent conflicts, some civilizations are joining the "Milky Way" cooperative, neither an alliance or an organization, empires simply combine their efforts to become one Meta-civilization when the need arises, either to gather a new energy source or during a galaxy-wide conflict.

There are over 10,000 civilizations inhabiting the Milky Way (although the majority are Tier 6 to 4, avoid contact or are in the far reaches, and remain unknown). Most are very alien (Tier U), and rarely interact with other empires or are interested in galactic affairs. However, some of the more powerful empires do. Some civilizations don't make it long after their discovery of nuclear energy, this means finding dead radioactive worlds is not too uncommon. The Galactic Core is rather devoid of normal life, due to the intense radiation, with only the harshest of life forms like the Grox surviving, and the Galactic Halo contains mostly low metallicity old stars, meaning life is also less common. Civilizations tend to exist in certain space environments that are calmer, and thus can form quite closely to each other.

Note: When an empire has a line through it, it might be extinct, or presumed extinct/unknown after the Annihilation if the user has not reclaimed it.

To use this scale, add your empire in each arm by order of Tiers, and note their status. If they didn't evolve in that region but have colonies, add colonies to the list. The list below shows the major influencing powers of the galaxy. However, many more exist, including varios Tier Unknown civilizations and Truly Alien life recently discovered.

“A Cyrannian, an Andromedan, and a Milky Wayan walk into a bar. After a few hours, the Milky Wayan puked all over the floor. The janitor started to cry, but the Cyrannian said "Don't cry over spilled milk." Thus the Earthman saying.”

“This galaxy became our legacy, and soon we shall reclaim the center for the Old Grox, and destroy our organic enemies for the Ascending.”

- Overmaster Grell of the Omega Hive