The Metruia Nebula is the most known nebula in Quadrant 82, a large nebula within the Core Regions of the Ramboidae Realm. Planets in the proximity of the nebula are Pauvenris and Karzhamarhi-Nui. Within the nebula lies the classified planet Lesrekta. Along the endges of the nebula runs the Ramsoria Run, an important trade route and hyper lane.

The nebula is a favored smuggling route for criminals, though patrols are dense. The nebula is also known for its high number of missing vessels that seem to be relocated to various location within the Endless Space, amongst them the Argoroth Sector.

The Metruia Nebula is an ancient nebula, formed upon the formation and creation of the Quadrant Galaxies. The nebula was first explored in 2350 (448 BQF) by the Rambo Nation starship, NX-01 Enterprise where by sheer luck they stumbled upon the hidden world Lesrekta.

Over the following decades, the nebula became known for its dangerous nature, with spacial electric storms and dangerous anomalies. Many ships, both smugglers and Rambo Nation starship have either gone missing or found destroyed and Rambo Command advises to avoid the nebula without indication. During the First Galactic War in 2794 (04 BQF), the nebula feated the Captain of Space and War, where captain Captain Rambam of the USS Luna was involved with hunting down the dreaded Labyrinth under command of Lizrawn. In 2802 (04 AQF), during the Great Cyrannus War captain Lizaconda used the nebula to hide from captain Ramcard and the USS Dallas and often led various attacks against the allied forces.

In May 2820, the Imperial Arquitens-class light cruiser ICS Unfortunate went missing after hunting down a Rambo Loyalist craft. The USS Harakaze was send to investigate but went missing as well, relocated to the Argoroth Sector after hitting an anomaly. On 10 September 2820, the Legatus star destroyer ICS Autokrator went missing with all hands.

During the Twilight of Divina events, the Metruia Nebula became a staging area for the Singularim Pact fleet when they planned their assault at Karzhamarhi-Nui and later on the Rambo Capital.

The nebula houses a large number of Quarantia's, dangerous creatures.

The star chart below features the locations of the planets and the positions various ships were lost while transmitting their lost coordinates before vanishing. Though Lesrekta is visible, it lies deep within the nebula and is normally not seen upon approaching the nebula. 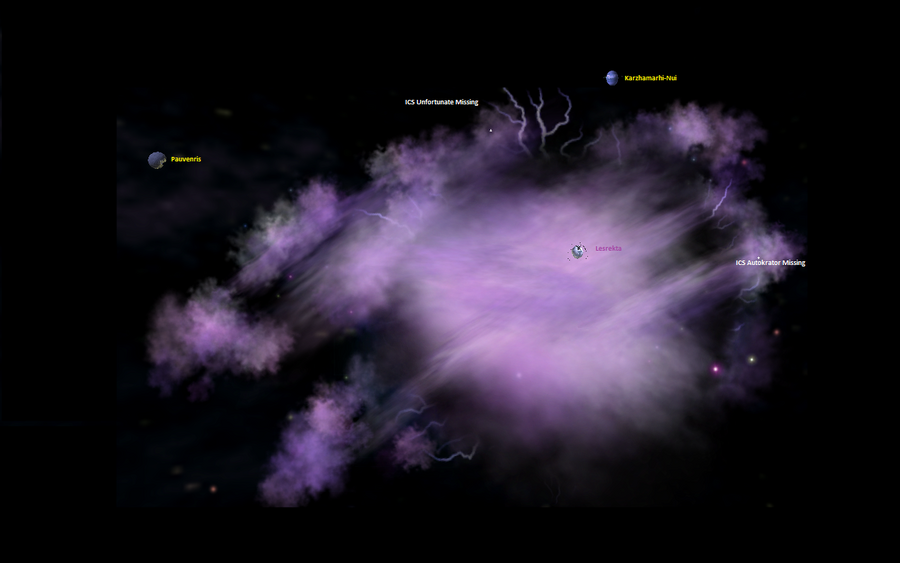 Retrieved from "https://spore.fandom.com/wiki/Fiction:Metruia_Nebula?oldid=852118"
Community content is available under CC-BY-SA unless otherwise noted.