To bring high Eleven culture and sophistication to the heretics of the land.

Expanding
“By my honour as Golden Queen, we will bring patience, knowledge and reason to the barbarians of the East. Thus is our duty as the rightful rulers of this world, bestowed by the gods to expand our dominion to those unfit to rule themselves. Menel' i' alkar en' i' mal tari!”

The Menelmeri Empire is a large empire on Koldenwelt that originates in the ancient and mysterious "Golden Lands" far to the west of Marmor. Led by the Menelmeri Elves, the Menelmeri Empire is fueled by a will to dominate the world thus bringing the choatic lands of Koldenwelt under supreme Elven rule. The Menelhelwen themselves are an an ancient, immortal race of high elves that possess a great natural applitude for magic, though are also known to be great scholars and intellectuals within the walls of their great golden cities, which gleam magnificently against the perpetually golden skies of their homeland.

Led by the Golden Queen Alwaen, the Menelmeri Empire has expanded beyond the borders of their lands in the west in recent years with many of their scouting ships making landfall in the northern reaches of Marmor as well as the main continent. Though the reasons behind their presence in the lands of the east remain unknown, their motives towards those they see as a threat cannot bode well for those unlucky enough to consider the golden elves of the Menelmeri an enemy.

The Menelmeri empire rose from the mysterious land of Menelinor, otherwise known as the "Golden Lands", far across the ocean from the largest continent on Koldenwelt. Though their land was initially divided by their people, a great threat that threatened all those in the golden lands prompted the Menelmeri Elves to unite to defeat it. In the centuries after, the Menelmeri built gleaming cities built from glass and gold which coupled with the natural golden tinge of their skin earned them the common name "Golden Elves". Though a veritable paradise, a rigid social hierarchy is in place in the land of the Menelmeri upon which much of their society was based.

However, several centuries before the present time, Menelmeri scouts ventured across the seas and discovered a new continent.And thus, plans for expansion into this untamed land were set in motion.

Led by the new Golden King Alwaen the massive fleets of the Menelmeri soon arrived on the island continent of Marmor, immediately sacking the Gonian city of Gonia and declaring dominion over the island continent. Though held at bay by the Dracacituí kingdom of Marmoreal, the northern half of the continent soon fell to the elven armies. However, in the face of the growing darkness from the southern region of Gul Guthur, the elven army under the command of Lord Nelulin stopped clear of entering this dark land, fearful of the land of evil to the south.

Though Marmoreal remained independent from the Menelmeri Empire, it is believed that it is only a matter of time before they capitulate to the Golden Elves of Menelinor. With their dominion over northern Marmor almost assured, the eyes of Alwaen turned to the main continent, a land full of wealth, knowledge and people ripe for the picking. Establishing the mighty bastion of Galadhae on the shores of the Western Ocean, the mighty armies of the Menelmeri began to scout the nearby regions of the main continent.

The Menelmeri Empire is led by a monarch known as the Golden King/Queen, who wields almost unlimited power over the direction of his or her mighty dominion. However, the most notable Lords and Ladies of the Empire may also aspire to join the Aureate Council, an advisory body to the monarch which holds a considerable amount of sway in all provinces of the Empire. Until recently, Lords and Ladies of the Aureate Council were exclusively Menlmeri Elves, though in recent centuries its ranks have expanded to include the conquered races of the Empire. The seat of power of the Empire lies in the elven capital city of Aendrithor, a city constructed from glass and gold that towers high over the surrounding countryside. Home to over one million people, Aendrithor is the largest city on Menelinor and is considered one of the largest on Koldenwelt. At the centre of this great city lies the Caeltas Tower, a massive spire that serves as not only the focal point of Aendrithor but also the Menelmeri Empire at large, with the Golden Queen herself residing on the tower's cloud scraping pinnacle.

The Menelmeri Empire is one of the most prosperous civilisations on Koldenwelt, a fact that can be readily seen in both the golden tinge of Menelmeri cities and the lavish and grand appearance of the Empire's elven masters. The Empire's policies are generally considered by outsiders to be xenophobic in nature, with the Menelmeri Elves holding a sense of inherent superiority towards most, if not all, other races of Koldenwelt. Unlike many elven races, a veneration of nature is not found in Menelmeri culture. Instead, there exists a pantheon of gods that are representative of the constellations seen in the night sky. At the head of this pantheon sits Meria, the Holy Matron of the Empire, who represents the strength and glory of the Menelmeri Empire over other civilisations.

“Bask in the presence of the Menelmeri, cretin. Your rightful masters.” 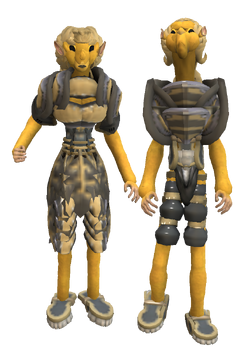 The Menelmeri Elves, sometimes referred to as the Western High Elves are the natives of the continent Menelinor far to the west of Marmor and the primary continent of Koldenwelt. Biologically, the Menelmeri are quite weak in comparison to humans and orcs and possess a noticeable gold-white tinge to their skin colour, a title that most Menelmeri dislike. In general, the Menelmeri are slender, tall, possess thin black or dark red eyes and the prominent pointed ears found on most elven races. Individuals that do not conform to this picture of an ideal Menelmeri are often shunned and cleansed from society.

Menelmeri culture is complex and proud, much like other elven races. The masters of architecture, the Menelmeri have crafted some of the most beautiful cities and structures on Koldenwelt, often while using white and gold-coloured stones which gleam magnificently against the skies of their homeland. Within the halls of these cities, the culture of the Menelmeri flourishes with majestic works of art and sublime pieces of music making Menelmeri cities a mecca for those granted the honour of entering them. Most Menelmeri take exceptional pride in the culture of their civilisation, an attitude that often results in Menelmeri being considered pompous and elitist by other races.

Though the Menelmeri Elves are quite at home in most climates found on Koldenwelt, they tend towards tropical regions of the planet close to large bodies of ocean, perhaps explaining the strong dependence the Menelmeri Empire has on its powerful maritime navy. Due to the fact that the Menelmeri see the rest of the world through a primarily colonial viewpoint, they are quite accustomed to waging war against other races though find such actions as barbaric, instead preferring to destroy enemies through patience and subterfuge. In combat, the Menelmeri are particularly proficient at archery, though they also make for capable hand-to-hand combatants.

Native to the island continent of Menelinor far to the west of Koldenwelt's largest continent, the Menelmeri Empire is one of the most expansive civilisations on Koldenwelt, spreading from the golden spires of Aendrithor to the swamps of Gonia and even as far as the fringes of the northern regions of the world. Menelinor itself is a mysterious land, of which little is known by the races who dwell beyond its shores. By all accounts however, Menelinor is a tranquil paradise of green fields, still rivers and alpine mountains, which the Menelmeri have incorporated into their famous cities, which dot the landscape of their homeland.

The jewel on the crown of Menelinor is the great city of Aendrithor, the capital of the Menelmeri Empire and the home to over a million elves, making it one of the largest cities on Koldenwelt. Considered by the Menelmeri to be the spot upon which the god Meria created Menelinor, the city is considered to be holy ground by its elven inhabitants, who are still wary about other races stepping within its walls, despite the increasingly cosmopolitan nature of the Empire.

The Menelmeri Empire possesses one of the most awe-inspiring militaries on Koldenwelt, with the Battle-Mages and Archers who serve under the Golden Queen being considered some of the deadliest in the world being instrumental in the conquering of the north of Marmor without suffering serious casualties, despite the ferocity of their opponents. The true pride of the Empire however is the navy, a force which boasts near unparalleled mastery of the waves in western Koldenwelt, with entire fleets of ships protecting the supply lanes from Menelinor to the lands of the east. The primary vessel of the navy is the Runcibae Dreadnought, a class of ship fueled by the ancient magicka wielded by all Menelmeri elves.

Serving as the primary face of the Menelmeri Elves in their conquests in the east is Lord Nelulin, a genius tactician who is considered by many of his opponents as being a cruel and sadistic warlord keen on forcibly spreading Elven dominance to the far reaches of the world. Though there is a tinge of propaganda against the Empire at work in this opinion of Nelulin, the ferocity of his armies and his own personal skills in battle lend credence to this rather foreboding description.

“Let us guide you towards power and glory.”

“There are few pleasures as fine as your company.”

“Bask in the knowledge that the Menelmeri have awknowledged you.”

“Menelmeri supremacy is the only way.”

“It pains me that the younger races require an education into who is the rightful owner of these lands. By Meria, they will know true order and prosperity.” 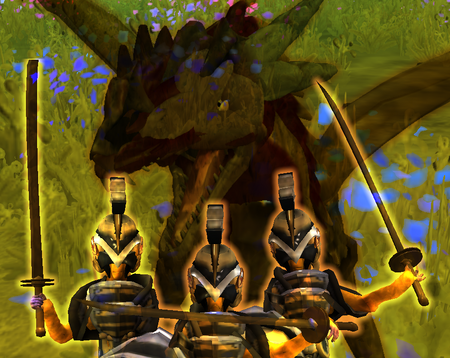