The Marinoxidiz, also known by technical names such as Marinox'Kikra were demonic successors of the Marinox created by Shu'wokerama to serve as the vanguard of the Corruptus during the Second War of Black Fog. Created from the designs of the Marinox by their original inventor Errr, the Marinoxidiz were a race of tremendously powerful demons who sought to throw the Onuris Universe in an eternal nightmare with their new god-master, Shu'rimrodir, under the control of all.

Working alongside the Errrbots forces created by Errr and the Loron'Kikra allies supplied by Kolossus, the Marinoxidiz launched a terrible campaign through the First Gigaquadrant, focusing on the Milky Way Galaxy due to their desire for vengeance against their old nemesis, the Dracogonarious. The war caused by the Marinoxidiz led to the deaths of trillions, nearly caused the complete extinction of many races and nearly brought the universe to its knees before they were finally defeated and destroyed, where their souls were recycled and turned into zombified husks which now serve the Corruptus' modern incarnation.

The Marinoxidiz were created by the entropic god Shu'wokerama sometime during the late 27th century, exact date unknown, by using Errr's original Marinox design in an effort to convince the Ermitant to allow himself to serve as a host body for Shu'rimrodir to eventually be summoned through. They came to populate a total of six Corruptus Overworlds scattered across the galaxies of the Gigaquadrant and developed their technology by attacking and looting the Grox Empire. At the beginning of the Black Fog War, the Marinoxidiz invaded the Milky Way in the form of a monstrous nebula which engulfed entire worlds, aiming primarily for the Dracogonarious Empire and other major powers of the galaxy while shortly after also expanding through Andromeda, Cyrannus and Ottzello. The capital of the Marinoxidiz, the Corruptus Overworld known as Primogius, remained hidden in the void between galaxies.

The campaign of the Marinoxidiz lasted a total of three years, which led to the deaths of trillions of sapients across all the galaxies they invaded. The monstrous war machine, made out of the Marinoxidiz, the Errrbots, the Loron'Kikra and the demons of the Corruptus would only come to a halt due to the efforts of Jerkon, Koluap and their many allies including the Delpha Coalition of Planets, the Kicath Empire, the Third Sovereign Domain, the United Republic of Cyrannus, the United Nations of Ottzello and the Divinarium. The Corruptus Overworlds of the Marinoxidiz were killed one by one until Primogius itself was attacked and destroyed, leading to the demonic monsters not longer being able to create more of themselves to attack their enemies. The ultimate defeat of Shu'rimrodir inside the Nightmare Region led the surviving Marinoxidiz to be reduced to ash alongside the rest of the Corruptus' demons, leading to their complete extinction.

Following the Annihilation, the Corruptus reused the Marinoxidiz's souls to create the entities known as Mari'verao, zombified husks inhabited by the tortured souls of the demons who now serve as siege monsters for Shu'rimrodir's hordes. The Marinoxidiz are also assumed to have inspired the design of the Marinox used by the Andromedan Grox Empire during the Andromeda War due to their very similar appearance.

The Marinoxidiz took the appearance of immense, demonic creatures roughly salamander-like in physiology, much like their Marinar and Marinox predecessors. The shortest Marinoxidiz were three times larger than a Marinox while retaining most of their incredible agility, and their bodies were decorated with immense bony plates and spikes as well as a pair of large, leathery wings. Much like the Marinox, the Marinoxidiz were cybernetic in appearance, and all possessed robotic eyes on the right side of their heads as well as implants across their chests. Marinoxidiz were genderless, not possessing distinguishable males or females, though they referred to themselves with male pronouns.

There was a single goal in the Marinoxidiz's existence, which was the ultimate surrender of the Onuris Universe to Shu'rimrodir and Errr. They had no culture whatsoever other than this, and dedicated the entirely of their existences to combating their Dracogonarious enemies and their allies. The Marinoxidiz were sadistic, destructive and cruel creatures who enjoyed causing as much pain and mayhem to their victims as possible, often slowly in order to make them beg for death and showed little regard for who they fought, as long as they won in the end. They appeared largely indifferent toward their allied forces, apparently seeing them as an extension of themselves though they clearly enjoyed being under their control. Marinoxidiz typically were too focused to develop complex personalities, but exceptions such as Marigrax and Karnak are known.

Due to their great size and supernatural traits, the Marinoxidiz were immensely strong creatures, able to tear even their Loron'Kikra allies apart with little difficulty while moving at surprisingly fast speed. Gravity did not seem to affect them like it affects normal creatures as they appeared indifferent in mannerism regardless of the planets they invaded. By using altered Grox technology, they were advanced enough to fight against even the greatest hyperpowers of the Gigaquadrant on equal terms, typically using essence-enhanced vibroblades or assault weapons for combat. The Marinoxidiz moved from world to world by travellig inside the Corruptus' nebulas, having no spaceships of their own except for Emperor Marigrax's flagship. Their nature as demons allowed them to use entropic energy in combat, often in the form of blasts of energy, while also making them sustainable to increased damage from positive-aligned essences, especially dream energy. 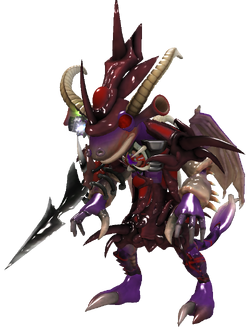 “The Devourer will feast on the souls of the master creator's enemies.”

Emperor Marigrax was the second-in-command of the Marinoxidiz. Despite having the title of emperor and acting as the official ruler of the species, he was actually under Errr's control all along. Marigrax could be recognized from other Marinoxidiz by his purple skin, red eyes and unique armor. Marigrax was easily the most powerful of all Marinoxidiz. His extent of Nightmare Energy use was the largest, as seen when he used a massive Nightmare Energy blast to destroy Draka-2. 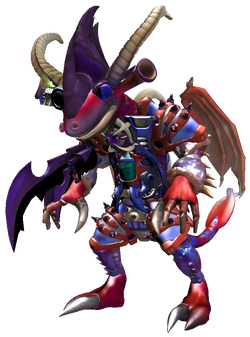 “Your hate makes me stronger in numerous ways!”

Commandant Karnak was the highest ranking military leader of the Marinoxidiz and a personal servant of both Errr and Marigrax. He could be recognized from other Marinoxidiz for his larger height and unique armor. Karnak was well known for his extremely sadistic and hedonistic nature, showing great pleasure in angering his enenies. Additionally, he was only behind Marigrax in power, sporting massive physical strength and Nightmare Energy powers.

“The Dracogonarious people has faced many, many foes. And we generally believed the Marinox were the worst of all. Oh, how we were wrong. They managed to get even worse, to say the very least.”

“You don't know unease until you watch near the entirely of your people burn at the hands of demons. That is what the Marinoxidiz did to the Bonio, and even though I never lived in their Republic... it bothers me every time I remember it.”

Retrieved from "https://spore.fandom.com/wiki/Fiction:Marinoxidiz?oldid=761908"
Community content is available under CC-BY-SA unless otherwise noted.