Prepare to be enslaved.

Bachyeon-Tarax War
The Leviathan Hive-Mind is a strange collection of forces under the direct command of the physically frail, but psychically powerful "Bachyeon", beings whose very presence can warp the minds of others around them, but are certainly not alone. Like their fellow cybernetic constructs and creations of the Multus Esse, the Grox Grand Dominion, the forces of the Leviathan are many and varied, ranging from chimeric beasts synthesised from the DNA of extinct creatures, to corpse-devouring psionic mutants. Their various servants and allies are many, and the Leviathan uses all of them to leverage their prowess towards one final goal; the elimination of all organic constructs that might stand in their way.

Despite this, they have still taken to using and spreading their influence among others. They famously helped guide members of the Mirusian Theocratic Congregation towards following the Leviathan, if only their end would be met with less restistance. Whatever their means are, the Bachyeon are believed to have influence and power over a number of civilizations, uncaring as to the end results, so long as they serve some enigmatic purpose in their grand games.

During the Enlightenment War, the Bachyeon began their first major expansion, shortly after their thought-extinct creators rose again. They joined their allies in attacking the Federation, Waptoria, and Zarbanian Powers, and helped their allies in their genocidal war. After their defeat, they withdrew back to their territory to gather resources and work out their next move.

After the formation of the Covenant of Mirus, the Bachyeon seemingly withdrew from most public interactions with other powers, though would reveal that the horrific Craadorsak were in fact part of their empire and merely a means to devastate parts of the Mirusian empires to keep them from being able to act on their unity and begin to push towards the rest of the Bachyeon and their allied powers.

The Leviathan does not have a culture per say, at least among it's main leaders and controllers, the Bachyeon, the eponymous Leviathan Aliens. These soulless cybernetic beasts are blessed with impressive telepathic abilities, but lack any physical strength, relying on minions and their own powers to overwhelm their foes and keep alive. Such cannot be said for their minions and allies, the Necrovores and Blood Dinos, each pursuing their own goals and ideals concurrent to the Bachyeon, and seeking to spread their influence through their own ways, regardless of their strange alien biologics and all. Though the Hive Mind keeps their goals orderly, and their forces from coming into conflict, it does not prevent either of the Bachyeon's allies from going about their own goals.

The Bachyeon rarely interact with their victims and even their servants, going about their goals to propagate and spread their influence and bring about the end of all organic enemies and civilizations that may oppose them. No matter how they pursue the goal, the end result will hopefully lead to their foes' destruction. Though capable of leveling the power to devastate whole systems and sectors of space, the Bachyeon prefer to plot and scheme and manipulate, rather then outright attack, though have no issue executing their forces to the goal of devastating all enemies.

While the Leviathan do not possess the same hunger for resources as their kin the Alpha Grox, they have a firmly held belief that like their Multus masters, all organics will eventually turn on them, and must simply make the first move. Though they may not look like it, the Bachyeon and their client races are mostly metallic frames with a membrane of flesh for infiltration purposes. This is the inverse of the Alpha and their Assimilants, which start out as organics and have at various points of their lives cybernetics added to them. Indeed, the Leviathan Hive-Mind does not seek to assimilate organics to gain their knowlegde. The lot of most organics in the Hive-mind is to have their vitals repurposed to fuel the Leviathan's vast enery grids or otherwise be willingly worked to death trough the effects of indoctrination. Even cyborgs are not safe for this treatment, as the Bachyeon still disdain them for their organic origins, and see their Alpha Grox brothers as somewhat sentimental for accepting them. That said, the Hive-Mind will gladly give true sentience to any synthetics they come across, and have worked their way into the mythology as several synth liberation movements as gods known as the "Old Machines". Organics supporting such groups are often specifically targetted for indoctrination, as it is easier to influence those who already believe the Leviathan to be saviors than those who know the truth, though indoctrionation of the latter is not unheard of. Regardless of how they might see the Leviathan, organics following them are destined for death in one way or another, as the Leviathan belive only in the purity of the machine and little else. 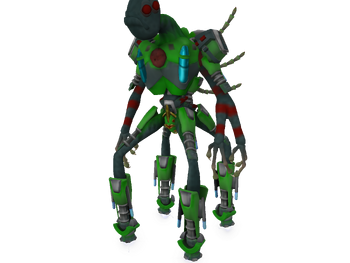 The Bachyeon are the iron-fisted rulers of the Leviathan Hive-mind, and ultimate coordinators of everything within their Empire. They are seen as a leadership and directory caste, giving orders and maintaining order among the various species, and uniting all of their alien and other worldly goals into one purpose; their expansion and over-powering of lesser beings. Rarely, do the Bachyeon actually get involved, leaving the direction and assimilation of others to their minions, instead, remaining within their foreboding and all-powerful Motherships and capital to guide the actions of their various minions, and monitor the other galaxies.

The Bachyeon rarely act directly, instead, using cats paws, and even when encountered, they are not a foe to be overwhelmed, but an enemy to be out-maneuvered. If confronted or attacked, the Bachyeon, despite all their power, may simply choose to leave the room in question, or teleport away, not wishing to waste the time and energy with lashing out at their foes. Despite this, when they wish it, a Bachyeon is a dangerous foe, able to use their psychic might to overwhelm armies with nightmarish illusions, arcs of lightning and calling forth storms to wreck havoc. 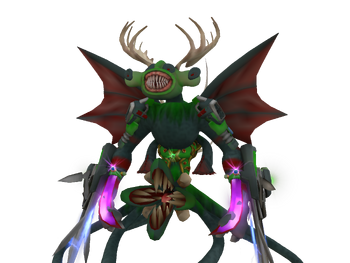 The Necrovores are a central member of the Leviathan Hive-Mind, acting as another leadership Caste for both coordinating colonies, and keeping troops directed and commanded. The Necrovore are a mysterious and enigmatic race, drawn to join the Leviathan for unknown reasons, and in fact their history and role in the galaxy is completely unknown. The beasts that call themselves Necrovore are, like the Bachyeon, are strong and powerful telepathic forces within their empire. They feast on the brain and organs of other races, growing in size and power based on the number of organs they feast upon, their age and the battles they survive. Due to their lust for flesh and blood, the Necrovore will take to the field ahead of the Bachyeon, acting as coordinators for their forces. 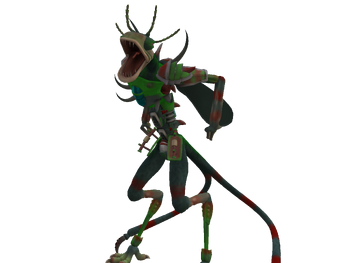 The supposed Blood Dinos, real name unknown, are a race that resulted from the Bachyeon seeking to improve upon the Raptorian ShadowRaptor concept. As such, they took the genetic slurry and samples of various, mostly predatory, archosaur species from across many worlds, as well as others like pantestudines and Dimetrodon equvivalents. Designing a metal skeleton and sythetic brain which would form the core of the creature, the Bachyeon carefully used the frame as anchor points for the organic tissue to grow in the shapes they desired. The resulting creatures are noted for their extreme survivability and intellect, noted for their abstract thought processes and powerful physical and mental abilities. No matter the foe, the Blood Dinos will seek to overwhelm and conquer them, for themselves and their masters.

They derive their name from a disease in their blood that infects mammals, and effects their reproduction. As all members are genderless and sterile, this Blood Disease will cause races infected to spread it like and STI, and their offspring to be hybrid Dinosaurs, much like the Blood Dinos themselves. Such soon renders the species in question extinct, as their offspring come out as Dinosaurid hybrids, though there are draw backs. Reptilians have more immunity to the disease, taking several generations for it to finally effect them, while actual dinosaurid life, such as that from Cyrannus, seems largely immune, except for a few weeks of sniffles.

The Craadorsak are a reptilian race of conquerors and warriors enslaved by the Bachyeon from their home dimension, and added to their growing empire. The Craadorsak Castes were added to the expanding power of the Hive-Mind, and placed within Gamma Ceti, a system of wild stars and isolated worlds that were difficult to navigate. As time went on, and the younger organic races expanded, the Bachyeon influenced the minds of certain government officials and leaders to make sure the other, younger powers were pushed towards settling these worlds and trying to conquer them.

Bachyeons are moderatly advanced race, being able to go toe-to-toe with the Meta Grox with ease. They use Nuclear power, not effected by radiation spills or the any pollution, and have a switched Mod Power supplier, that allows them to Switch off certian planets that don't need energy.

All Energy Mods are controlled in a Gigantic Plantary fortress, that distrupts energy around the colonies. Since this is hard, colonies only get enough energy to survive, and then have to wait to get a refill.

As stated above, The Bachyeons are equals of the old Meta-Empire, before their enslavement into the civilazation.

The Bachyeons, like most snythetic races use Drones and Synth Slaves to fight their battles. The only reason Bachyeons arrive on battle is too over-see Diplomacy and Surrendering, or to keep slaves in check with telepathy. Bachyeons also have a secret weapon, called the Blood-Dinosaurs. These creatures where the result of them taking the DNA of earth's Dinosaurs, and other Planet's epic beasts, and mixing them into a group of savage guard dogs.

Bachyeons, unlike most other synthetic races, use their physic abilities to indoctrinate individuals they are interested in via mindmelding. The mindmelded person starts to hear distorted wishers in their head with over time develop into Bachyeon voices. These voices pretend to be a friend to gain the individual's trust, but slowly become more demanding. As the Bachyeons gain stronger control over the individual, it becomes more and more obsessed with serving them. This comes at a cost however, as the individuals slowly starts to lose his/her memories and physical/essence abilities. Eventually, when the individual as just a mere leftover of what he once used to be, meaning he/she is technically useless, he/she is assimilated. Bachyeons often mindmeld leaders of lesser civilizations, causing the said civilization to worship the Bachyeons and do their bidding. Certain beings actually begin to morph in a Bachyeon, causing them mulch their skin for the Bachyeon's new form.

Zi'encas was once a being from an unknown reptilian race. While the race was made of proud warriors and fierce fighters, Zi'encas was not. A cowardly man with a tendency to run from battle, Zi'encas was killed when he attempted to run from the battle field, and abandoned by his people. However, the Bachyeon found his body, and assimilated and altered his mind.

Replacing his lungs and most of his chest with cybernetics and his right arm with robotics, Zi'encas became the perfect soldier for the Bachyeon, and remains their top commander.

Deemed for assimilation and processing

“Of all synthetics,they are our worst enemies.”