Da Legion of the Deathmarch

The Legion of Badmanz, also known as Da Deffmarch Boyz, are a Loron faction that serves the Legion of the Deathmarch.

The Legion of Badmanz was a formation of various Andromedan Loron. These came from:

Due to being far from the Ottzello Galaxy, they were neither enslaved by the Unified Nation of Ottzello nor absorbed into Fre'kloar's empire. They were robbing and murdering like all Loron, and their cruelty and power drew attention of the Sanktanaar Divin-Ra.

During the Annihilation, the Mali'Nar saved the Andromeda Loron from the apocalypse, moving them to the Purgatory temporarily and then back to the Andromeda when the Annihilation has ended. Then, the Mali'Nar have used their powers of mind control to enslave these Lorons, turning them into the Divin-Ra's new weapon. Master Br'klakkon has taken control over them, due to the fact he was a Loron himself, and has turned the newly formed Legion of Badmanz to the powerful empire where he rules over the Loron with iron fist.

The Legion of Badmanz' first notable action was in the Andromeda War, although, governed by their master, they were generally working behind the scenes, their wild raids being skillfully controlled by Mali'Nar own sinister purposes, each being a surgical strike against the Commonwealth or other mortals whose destruction was required. Their full power wasn't unleashed until the final battle on Cathemera, when their leader, Br'klakkon, has claimed the Artifacts. It was there, however, where the Legion was decapitated, its warboss's death making the Lorons flee.

Nobody knows what happened with the Legion since then, but it is certain they are no longer a major threat to Andromeda.

The Legion's females, due to being more intelligent, were taught by the Mali'Nar how to utilise the elemental energy, and became quite adept at using it. As a result, they are a bit more admired by the Legion's Loron.

The high-ranked Loron Boyz and the Loron Chikz were empowered with the elemental energy, allowing them to use some fraction of the Mali'Nar's mind control and reality warping abilities. Due to being a Chronoscopic species, they have some minor Chronoscopic powers like all Loron, as well as other common Loron abilities.

The Legion's society is more ordered than the Loron one, having a strict hierarchy within their ranks. Unlike in the other Loron societies, da Chikz are often in places of power within the Legion, due to their intelligence and newly obtained elemental powers.

Legion's planets are like all Loron planets - drowning in blood and corpses, with angry Boyz fighting over dominance. However, the Lorons have learned from Mali'Nar the art of the psychic construction, and the silver and gold towers of the pure bling are dotting the landscape of Legion's planets, displaying the sheer power of their master.

The Legion of Badmanz' vehicles are diverse in look, technology and origin. Some of them are the primitive machines made by Loron themselves, the elaborate Mali'Nar constructs given to Lorons as 'gift', the crude attempts of Lorons to imitate these constructs made by the Loron "elemental engineers", and vehicles stolen from The Divinarium, CAS, Wentals and other Andromedan empires. All these vehicles are painted with black, purple and sometimes red, adorned with silver ornaments, and are terrifying to sight.

Legionnaires uses little machines or devices, much like all other rogue Lorons. Mali'Nar give them some of their technologies sometimes though, arcane machinery which infuses the wearers with eldritch energies, giving them immense strength but eventually turning them insane (though for Lorons insanity is perfectly normal thing anyway).

Lowly Legion's Lorons use the same weapons as normal Lorons, primitive guns and daggers, crude but powerful in hands of barbarians like Lorons. Chikz and Bosses, however, were seen using different weapons - sleek and ancient blades and guns, made of the strange black metal. These weapons were seen to utilise the mysterious energies, extremely dangerous but volatile. Mali'Nar are believed to be the origin of these armaments, although Xhodocto may be involved as well.

Lorons in the Legion of Badmanz are like all other Lorons: primitive barbarians, bloodthirsty and cruel. Mali'Nar, however, have enchanced their intelligence slightly, making them intelligent enough to serve their masters. How much Loron is enchanced with intelligence is varied with each Legion's Loron: Bosses, for example, are far more intelligent than lowly Boyz due to their ranks. Some of the Loron, as well as most of the Chikz, have learned how to utilise Elemental energy to use as a weapon. 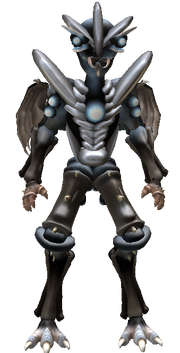 Br'klakkon is a second Mali'Nar commander appointed by Divin-Ra to lead her forces. Hated by other Lorons for his intelligence and craving for more power, he spent his lifetime studying ancient knowledge, using the dark powers he learned to carve his path to the leader of Andromedan Lorons. As Divin-Ra approached him, he became one of Mali'Nar, and now his plans endanger the whole Andromeda.

Br'klakkon is arrogant and violent, a result of him being beaten and bullied in his youth. However, he never lets his arrogance blinds him and he spends most of his time behind the scenes, subtly influencing events and watching them unfold, the grand schemer and manipulator. Vanishing and supposedly destroyed during the Battle fo Cathemera, Br'klakkon's fate now remains an enigma to the species of Andromeda. 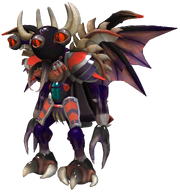 “SHUT UP BEFOR I BREAK YOO INTO A DOZEN PIECES”

Gratz'kaoz is the second-in-command of the Legion of Badmanz. He is well known across the Loron as a complete madman who has been revived multiple times, being the greatest enemy of Da Rogue Boyz. Grakz'kaoz hates all the Legion of Badmanz, only serving under their name to obey his true master, Kolossus.

Gratz'kaoz is the most insane Loron'Kikra of all time. Bloodthirsty and overly violent, he won't exitate in killing his own boyz to release his stress. He has no concept of mercy, or friendship. He also gets angry over minor things, and cares for no one but himself. Even mentioning Gratz'kaoz is frightening in Da Rogue Boyz, and in Loron culture within UNO, who have given him folkloric names such as "Da Devil", "Da Maddest Geeza" of "Dat Fukkin Psykko". 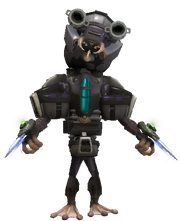 A third-in-command under Gratz'kaoz, Gar'dakkra is the fleet commander of the Legion of Badmanz, obsessed with speed and guns. In his mad thirst for thrill and pleasure, he seeks the wildest battles, the fastest races, where he could enjoy the bliss of speed and bloodshed, hear the music of the battlefield. Cries and screams are music to his ears.

While Gar'dakkra is still young for a Loron, he is a superb driver and captain; equally skilled in spaceship control and jetbike driving, both of which are equipped with the largest and loudest weapons he can get for his enjoyment. Br'klakkon also feeds Gar'dakkra with drugs that increase his reactions, empower senses and increase physical strength, turning him into a machine of slaughter.

Gar'dakkra vanished after the Battle for Cathemera, but there are rumours that he survived it, and now serves a new master as a bounty hunter. Whether this is true or not remains to be seen.

“Our servants are better. Deal with it.”

“Nice... I could use the Loron army for chaos.”

“They will serve well to weaken biolife and allow mecholife to be victorious...”

“By the lifefather... We cannot let these shadow-empowered brutes bring ruin to even a single sector.”

Retrieved from "https://spore.fandom.com/wiki/Fiction:Legion_of_Badmanz?oldid=588420"
Community content is available under CC-BY-SA unless otherwise noted.