Precursors
Servitude to the Corruptus

The races of modernity exist to serve us.

Active
“The Black Realm is a truly vile stain on the map of our galaxy; but a mere step up from the mindless Ganthorea, the Kondrakar pride themselves as lords and conquerors, yet in truth, they are wretched vermin enslaved to dark icons and prophetic liars - they deceive themselves into delusions of grandeur to escape the reality that they were not meant to inherit the galaxy from those that came before us, thus they will do anything - and everything - in their power to make the process of terminating them from the stars as tedious as possible. They are the scions of darkness who shall break and kneel before us, the children of the gods.”

The Great Black Realm of Kondrak, most known as the Kondrakar Dominion, is the nation of the Kondrakar race and one of the greater powers of the Borealis Galaxy. One of the Ancient Three - a trio of nations which once ruled the galaxy one million years ago -, the Dominion at their apex controlled most of the Eastern Arm, though they were eventually pushed back to their home sector after centuries of war against the Rovegar Matriarchy and the Ganthorea. In the current day, the Kondrakar have pledged themselves to the Corruptus and are considered one of the nations which compose the Dominion of the Xhodocto.

Demonic influence marks the history of the Kondrakar, as they are believed to have either been created or evolved by the Xhodocto Eye Diafthora, which became the central point of their society. Rising from their homeworld of Kondrak, the Dominion spread across the Muvogura Sector seeking to dominate the entire galaxy, with no races at the time existing to oppose them - the Kondrakar's only true rival in their galactic arm was Zarkhator, and the two races chose to ignore each other for most of their history.

Thousands of years after they rose to the stars, the Kondrakar Dominion had dominated almost the entirely of the Eastern Arm, the races in it who had not been destroyed being turned into slaves ruled under an iron fist. The demonic creatures, at this time, begun to seed worlds with artificial lifeforms which would later become their followers, and while most of these were wiped out during the war between the Ancient Three, the Hseraelna are known to have survived.

As the Dominion sought to invade the Outer Core under the rule of the mighty Maknagrius, they found it infested with Ganthorea and the Western Arm under the control of the Rovegar. Thus begun the war of the Ancient Three, where these three superpowers fought and sought to annihilate one another. Lasting for thousands of years, the Kondrakar were eventually defeated by the combined power of the Rovegar and the hordes of the Ganthorea, leading their galactic arm-spanning empire to crumble and for them to return to their home sector, where they could not be found. The defeat of the Kondrakar allowed life to flourish across the Eastern Arm once again, eventually leading to the birth of races such as the Wranploer, the Niaka and the Seagon.

With the defeat of the Devourer's Chosen during the Second Borealis Galactic War, the Kondrakar were approached by the Corruptus - true creations of Diafthora - and became their elite mortal champions. As the Ice Age begun, the Kondrakar watched the Rovegar and Ganthorea rise back to the galactic scene again, and begun planning their own great return upon the galaxy.

The Kondrakar Dominion is a theocratic dictatorship under the rule of Maknagrius, the Lord-Padre and chosen of Diafthora. The Lord-Padre, an equivalent of both a monarch and a pope, rules the Kondrakar until his death in which case, their advisors turn to Diafthora who then chooses a successor. Makagrius rules the Dominion atop the great Lord's Spire, the highest peak of Kondrak, where he spends most of his time in constant meditation, leaving direct control of the Dominion's day-to-day affairs to several hundred advisors. How the government of the Kondrakar works beyond that is a mystery never unveiled by the Rovegar.

Extremely little is known of the Kondrakar's inner society. The Rovegar, during their war with the Dominion, came to believe the Kondrakar live in perfect harmony among each other, probably due to serving under a Xhodocto Eye; all of them are equal under its gaze. The Kondrakar Dominion is extremely speciesist and rarely allows other races to live in it, not even those who also compose the Dominion of the Xhodocto, with the exception of those created and uplifted by the Kondrakar themselves. In the current day, the only race created by the Kondrakar to still exist is only vaguely aware of their existence.

The entirely of the Kondrakar's existence is based around the worship of Diafthora, one of the seven Xhodocto Eyes. As the Eye with the biggest disposition to dominate rather than destroy, it taught the Kondrakar that they should rule Borealis and impose their authority over all those who opposed them. The Corruptus, created when Diafthora descended Shu'rimrodir, are seen as the Dominion's equivalent of angels and are the only beings they are willing to see as superior to themselves. When Diafthora was reunited with Shu'rimrodir during the Third Xhodocto War, the Kondrakar Dominion became the de facto successor of the Devourer's Chosen. 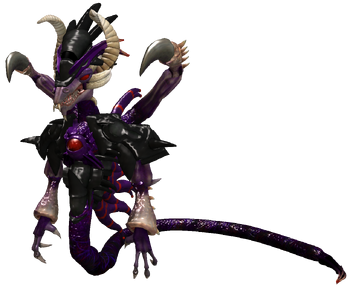 “You exist to be my kin's cattle. Accept our rule or be butchered.”

Lord-Padre Maknagrius is a descended Kondrakar who serves as the ruler of the Kondrakar Dominion. An immensely old entity dating from before the birth of the galaxy's modern inhabitants, Maknagrius was once the ruler of the Eastern Arm until he was weakened by the efforts of the Rovegar and the Ganthorea, though after becoming a demon lord of his own right under the Dominion of the Xhodocto, he has become more powerful than ever.

“We accept your existence for the time being.”

“We will thoroughly enjoy your annihilation.”

“They have no place in my galaxy. Borealis will not thrive until the Kondrakar are reduced to ash.”

“The most insidious creatures I've had the displeasure of sharing a galactic arm with.”