Scions
Kjac is an elder Yodian, living at the planet Quadrantia Humanoids planet Terra Prime. Living outside the main town, Kjac is known as a professor, studying mysterious creatures and living at a farm on his own. Though some in the village know him, doing errends of visits for him many find him humble and kind but find it difficult to trust a non-humanoid.

Kjac was born a Yodian infant within an isolated village somewhere within the Quadrant Galaxies. Living a life of shelter and peace, Kjac eventually decided to explore the Cyrandia Cluster and venture between the stars. To do so, Kjac worked onboard freighters for a while, often as a maintaince worker due to his little size he could easily fix things in tubes or small spaces. Eventually Kjac discovered and befriended a Veseva while visiting the homeworld of the Chavelli. Spending years at the Chavelli homworld, Kjac became known as a wise and humble creature, the few who could train the mysterious Scions Abrazulam would often come to him for aid and council. At an unknown date Kjac left Chavelli again and continued his journeys together with his befriended Veseva who he could summon to his aid, though the Veseva mostly just walked beside him. Around 0 BQF, when the Second Galactic War was raging, Kjac settled down for the first time in his life at a planet known as Terra Prime, the native Quadrantia Humanoids treat him with respect but are weary of him. Once there, Kjac became known as a professor and scientist, studying mysterious creatures and visitors from other worlds came to him for guidance and council about them.

Between 0 BQF and 06 AQF, Kjac became good friends with Watcher, the local police officer in Pallarian Town and the police officer often visited Kjac for a cup of thea and biscuits. He also became the mentor for Aubrie, though lost track of her when she visited Vasuband in the Cyrannus Galaxy to chase after rumors that there was a Scion at the Basileus homeworld. After she vanished, Kjac met with Zhevar, a Gaskhan scion trainer who had obtained a unique white Rattatoi. During Zhevar's training the Rattatoi was killed and Zhevar had a difficult final months. After Zhevar finished his tutelage under Kjac, Zhever left Terra Prime and Kjac never saw him afterwards.

In 06 AQF, Kjac was relieved to see Aubrie return, shocked to hear her story of slavery at Sanderhal, he soon send her on her way again to become a Scion trainer once again. During the twelfth month of 06 AQF, Kjac met Claire Rambo and Corva, under his tutelage he learned Claire about the various Scions and help her understand them better. During his tutelage he was surprised to find her swimming in her underwear, and was a bit unsure how to behave. Though as his Charzargon took a liking for Claire, also Kjac had a soft spot for Claire. Concluding her tutelage, he set her upon her journey after informing her about arenas and skill token.

In early 08 AQF, after the crew of the Falcon had their Adventures at Nal Amroth, they brought the Sinleri girl, Idris Vanguinar to his house for healing. Kjac managed to heal the young girl though was a bit careful around her for being a Sinleri Elf. A race of elves Kjac didn't fully trust and even feared a bit as they have a notorious reputation. None the less he allowed the girl to remain at his house for the duration of her healing and recovery and took care of Claire her Scions as she left them behind for her safety. After the events of the Torments at Arcaniox, Kjac was informed of Claire's fate and was deeply saddened by it.

Kjac is a kind and humble person, wise in many things he is most known as the expert on the mysterious Scions. Having a love and great interesst in the mysterious creatures Kjac also enjoys working in his garden and walking through the woods. For relaxation and pondering his thoughts, Kjac can be found sitting in a chair and enjoying the sunshine with his Veseva lying on his lap, purring. Walking through the woods is something Kjac often does when having a troubled mind, though for walking he needs a walking stick because of his old age.

Some believe Kjac was the very first Scion summoner, though Kjac dismisses these claims as not true. Eager to tell his stories about Scions, he is very secretive about his own past and doesn't easily trust others.

Known Scions Kjac befriended and is able to summon: 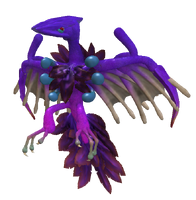 Valaxion, the second Scion Kjac befriended and the most powerful and rare

Charzargon, given to Claire Rambo after it took a liking to her