The Keiternyan Star Empire has many influental and notable citizens. They are listed below, with names, date of birth, occupation and living place.

Displayed below are the members of the Keiternyan Imperial House of Kyanos.

The Keiternyan royal family. From left to right: Empress Huyankyra, Crown Prince Carmonion Kyanos, Emperor Kyantay VII, Captain Jinkyax Cai(soon to be Prince Jinkyax Cai), Princess Hyndusa Kyanos. The little guy in front is Prince Casiar Kyanos. Not on the picture is Kayna Kyanos, the twin sister of Hyndusa, and Laythar Kyanos, Kyantay's younger brother, who were ill.
Add a photo to this gallery

Date of birth: 18th of April 175 AE (After Enlightment, that is, after the Unification of Keiternya), aged 44.

Living place: One palace on Keiternya, in Kyrtosia, and some more scattered throughout the Empire.

Emperor Kyantay VII having dinner with Empress Ramashe of the Rambo Nation. All credit of this picture goes to dinoman82. 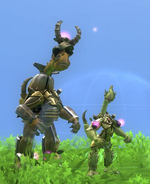 Emperor Kyantay VII playing with his son, Casiar Kyanos, in the garden of his palace.

Emperor Kyantay VII in front of the Imperial Palace during a photoshoot.
Add a photo to this gallery

As the current Emperor of the Keiternyan Star Empire, Kyantay VII is certainly one of the most influental persons of the Empire. He is a just, wise and able ruler who has led his people to much wealth and glory. Loved by his citizens and feared by his enemies, Kyantay VII is one of the most successfull rulers of the Keiternyan Empire (especially compared to his uncle and predecessor, Kyantay VI, who was an extremely xenophobic and paranoid Emperor), and it is under his government that the Keiternyan Star Empire really joined the galactic community. Emperor Kyantay is also known for his daring attacks on Grox outposts in his sector, and to actually win the battle. This made the Keiternyan Star Empire a leading figure in interstellar politics in their sector. Kyantay, aged 44, is not likely to descend from the Golden Throne soon. Recently, Kyantay VII visited the Rambo Nation to negotiate the terms of an alliance, and there he met and had dinner with Empress Ramashe of the Rambo Nation. Kyantay is hopefully soon going to meet with President Apollo of the United Republic of Cyrannus and Emperor Dragonar VII the Great of the Dragonian Star Empire. Kyantay believes his people strong enough to be a honorable member of the galactic community and he is fully giving all his strenghth to reach that goal. Under his rule, the Empire quickly met and became frinds with the United Republic of Cyrannus, Rambo Nation and more. One could say he is quite successfull in reaching his goal. Furthermore, Kyantay loves spaceracing, racegames, debating and great dinners.

Her Imperial Majesty The Empress HuyankyraEdit

Occupation: Empress of the Keiternyan Star Empire, freelancer at charity organisations, regent of the Empire in absence of Kyantay.

The Empress, waving, with her youngest son, Casiar Kyanos, on the foreground.

Empress Huyankyra during a photoshoot.

The Empress, smiling.
Add a photo to this gallery

The current Empress, Huyankyra, is loved by all her people. Always aiding her people and her husband during hard times and ruling the Empire wise and righteous in the Emperor's absence, she has found a place in the hearts of nearly all the Empire's inhabitants - and beyond. Huyankyra has proven herself to be a good choice as Empress. She works as a freelancer at a charity organisation for orphans in her free time, which gave her the loyalty of even the very poorest. She is also a good debater and has, more than once, brought the Senate to the right decision. Recently, she visited the borderworld of Traek, where she revealed a statue of Kyantay VII and herself, as a sign of respect for their great efforts for the Empire. She is 37 now and will hopefully rule for many years to come.

Occupation: Heir Apparent of the Golden Throne of the Keiternyan Star Empire, will become Admiral of Admirals when he reaches the age of 19, will become General of Generals when he claims the throne. 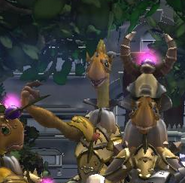 The Crown Prince Carmonion Kyanos, happily waving. On the foreground are his parents.

The Crown prince during a photoshoot.

Carmonion on a press conference. Left of him stands his sister Hyndusa, Right his uncle Laythar. The emblem behind is the Kyanos royal seal.
Add a photo to this gallery

The Crown Prince of the Empire, Carmonion Kyanos, is still young (17), but do not mistake him for a simple child. Carmonion is courageous, smart and he has a strong will. He accompanied his father on some smaller military expeditions and there he learned. He is always in to try something new, as he is a very nosy young man. He was the first to try the new, experimental version of the Space Needle (with success). He is a polite, friendly person, who will support his fathers reign in any way he can. Many women from the Keiternyan Star Empire secretly hope to marry the young bachelor, and not a single citizen of the Empire has any doubt that Carmonion, later Kyantay VIII, will be a great and able ruler after his father descends from the Golden Throne. He is now following a study to become a fighter pilot and he is a great lover of games, travelling and chemistry. Carmonion is also known for his quote about the United Republic of Cyrannus, upon encountering them: "Vast interstellar empire. Massive armada. Huge economy. I like these guys already!"

Occupation: Second in line to assume the Golden Throne.

Princess Hyndusa in front of the Imperial Palace. 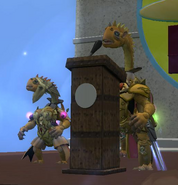 Hyndusa with her older brother Carmonion on a press conference.

Princess Hyndusa during a photoshoot.
Add a photo to this gallery

Princess Hyndusa is now 16 years old, and she shows to be a lovely and good princess of the house of Kyanos. She is the fiance of Captain Jinkyax Cai, the most respected Captain of the Empire, soon to be Prince Jinkyax Cai. Marrying at the age of 16 may seem somewhat early for some, but Keiternyans reach adulthood very quickly, at the age of sixteen. Hyndusa is always eager to help the poor and the injured and that has earned her something of a reputation. She works, like her mother, at a charity organisation, to develop a real relationship with the people of the Empire. She also came along with her father during military operations, for she is not just a simple princess, and she is brave and strong. She will definately make a fine wife for Jinkyax, a princess to be proud of. She also has a twin sister, who was born one and a half minute after her.

Occupation: third in line to assume the Golden Throne, dancer.

The Princess during a photoshoot.

The Princess during a photoshoot
Add a photo to this gallery

Kayna, or popularly 'Kay', is third in line to assume the Golden Throne of the Keiternyan Star Empire. Therefore, the chance for her to ever get on that throne is minimal, so she reasoned: than just have a good life without being Empress. And so she did. She is probably the most popular member of the royal family. She can be found at nearly every party in the proximity of the imperial palaces. Her parents do not always approve this, but what her parents day doesn't really matter for her. However, she still only wants the best for the Empire. She helps where she can and she is known to distribute food among the poor people in the streets of Keiternya. This is one of the things that earned her such an awesome reputation. The other thing is her skill as a dancer. She is loved among all Keiternyan man (which is not always approved by their wives) and the poor. She also is a fine debater and a lover of sports.

Occupation: fourth in line to assume the Golden Throne, will become Admiral of Admirals when Carmonion claims the throne.

Prince Casiar in front of the Palace.

Prince Casiar during a photoshoot.
Add a photo to this gallery

Prince Casiar is the youngest member of the House of Kyanos. He is a cheerful, friendly young prince. He is often seen playing in the garden with his older sisters and brother. He is loved by the Keiternyan people, and he has inherited the dignity, kindness and love for debates of his father. He goes to school in Kyrtosia on Keiternya and he has the ambition to later become a master diplomat or debater. He further loves travelling and the nature.

Occupation: fifth in line to assume the Golden Throne, current Admiral of Admirals (to be successed by Carmonion in 2 years). 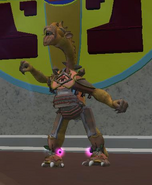 Prince Laythar during a press conference.

Prince Laythar during a photoshoot.

Prince Laythar aboard his flagship, the KSE Disruptor Bank.
Add a photo to this gallery

Prince Laythar is the younger brother of Kyantay and was second in line to assume the Golden Throne. But with every child of the Emperor more he made less chance of becoming Emperor. Now he is fifth and last in line to become Emperor. However, he doesn't care at all. Laythar is a free spirit with a free mind. He loves flying around in his spaceship way more than to be confined to the Imperial offices. Laythar is the Admiral of Admirals of the Empire and also the Grand-Captain of the largest battlecruiser of the Imperial Navy, the KSE Disruptor Bank (he came up with that name himself). Laythar is very popular within the Navy. The soldiers of the Navy are very loyal to him, also because he is such a great admiral. No fleet under his command has ever been beaten (at the other side, the Navy has only fought against minor empires, so he still has to gain experience with the more advanced galactic fleets). He further is a great fan of theatre and art.

Captains and other Navy PersonellEdit

Listed below are the famous Captains of the Keiternyan Star Empire and their subordinates.

Occupation: Commodore of the KSE Fireflyer of the Keiternyan Star Empire, Admiral of the elite Keiternyan first fleet, when he is married to Hyndusa he will be third in line to assume the Golden Throne.

The KSE Fireflyer, Jinkyax' main ship.
Add a photo to this gallery

The Commander posing in a photoshoot.
Add a photo to this gallery

The Second Commander, ready for battle.

Kyax posing for a photoshoot.
Add a photo to this gallery
Retrieved from "https://spore.fandom.com/wiki/Fiction:Keiternyan_Star_Empire/Notable_Individuals?oldid=423881"
Community content is available under CC-BY-SA unless otherwise noted.